This one is held in high regard by some, haven’t seen it myself.

It apparently features many american actors, but is solely an italian production. 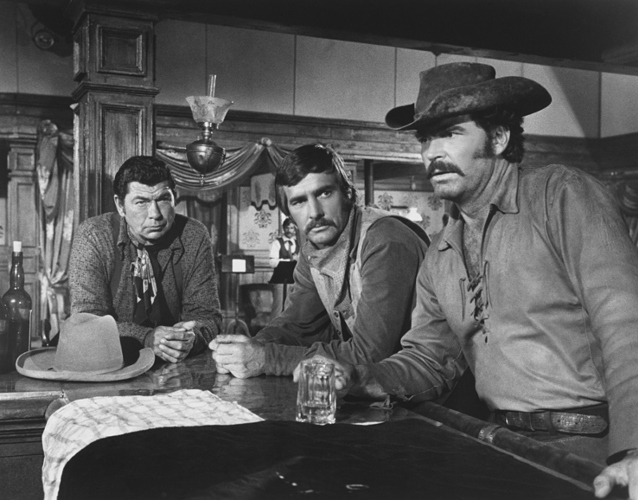 Its good I enjoyed it, however the R1 release is missing a few minutes I believe Laura Antonelli’s rape sequence is missing, that is why I gave it a 3.

Would like to hear if anyone had seen it when first released?

For those who have not seen this movie It comes on Encore Westen sometimes.

Most of the actors were friends of director Vic Morrow and it is basically an American western filmed in Spain because of the cost savings. It has a SW edge to it and Garner plays an out of character, for him, bastard, who rules his gang with determination. Some suggest homosexual tendencies between the gang members, but I can’t see it. Just a bunch of outlaws who are staying alive by the mercy and cooperation of the rest of the gang. When pain in the ass Marley destroys this trust and pits one against the other the gang falls apart. Not a great SW but a change of pace film with many familiar faces. Morrow plays the part of the Scout on the painted horse of the professional guards protecting the gold shipment.

I’ve been to the town shown at the end of this film in 2005 and it still looks the same. That’s one great things about the Spanish locations, they were real towns or sets still used as tourist attractions today. Even the ruins can be located if you know where to look.

I watched this last night, I liked it.

I didn’t even realise this counted as a spaghetti till about 3 years ago! ;D

At least looks to have some Spaghetti Style in it. Seems to have a US regular plot ??? What about the cast ? The locations looks good, Spanish-Mexico.

I love it. Great finale shootout and a spaghetti feel throughout. Top 20 for me; Five stars; as 18.95 on 20 … etc.
Long time since I’ve seen it but I seem to remember (I think it’s this) when a crucifix is tied to a gunhand - as a splint - for a shootout … great spaghetti irreligeous touch (forgive me Lord).

I love it. Great finale shootout and a spaghetti feel throughout. Top 20 for me; Five stars; as 18.95 on 20 ... etc. Long time since I've seen it but I seem to remember (I think it's this) when a crucifix is tied to a gunhand - as a splint - for a shootout ... great spaghetti irreligeous touch (forgive me Lord).

The whole final shootout has a lot of religious symbolism/imagery, including that great touch of having the crucifx as a splint, which I love. If I remember right, Hooker and the Old Man are waiting for Sledge in a crumbling church too.

I’m glad to see other people enjoy this one. I’ve read a lot of reviews that rip it to pieces, but I’ve always enjoyed it. And Sledge’s gang is one of my favorite movie gangs, lots of cool characters, not just Garner, Marley, Akins and Weaver. Here’s a trailer I found at Youtube that has some of the movie’s really quirky soundtrack. Enjoy!

For me, only a more ordinary western. Routine stuff.

The first scenes are the best.

than that “Great Silence” 1968 which is good but ruined by that Jean Louis Trintignant ???

What don’t you like about Trintignant in TGS? It’s the only movie I’ve ever seen him in, but his performance is one of the best parts of the movie. His character is such a good balance to Kinski’s Tigrero.

Obviously a matter of preferences and personal tastes but, quite frankly, trying not to be judgmental in view of such statements is a hard an stoic exercise.

Apart from the fact that The Great Silence is one of the very best (top 6-7) SW and one of the best 10-20 westerns ever.

Like I said: There are as many opinions (possible) as ass holes…

it has a SECONDARY “B” cast in Trintignant, Kinski and Mcgee and those are FLAWS.

Trintignant is NOT a good actor , not a SW actor and is usually in ultra boring dramas :-\

Do you really think an argument becomes stronger by simply repeating it constantly?

@ Sartana Django
So i am ‘STUPID and BIGOTED A-ss Hole’ because i honestly love that movie and find Trintignant a great actor?

Nothing personal I was replying to Manco and he did infer that TGS is "beyond criticism"
and referred to As-s holes in a way I disliked.
Other posters on this thread have praised MAN CALLED SLEDGE 1970 and given
it even higher scores than I did.

I have never said that TGS is NOT a good, well made, pleasing SW but I have every
right to point out clear FACTS like the cast being SECOND RATE and Trintignant’s dramas.
Kinski is good in many SWs/Giallos/Horror but he is NOT a leading man but supporting.
Also you Alko should NOT assume that everyone has TGS in their top 20 or top 5

You see I like to judge a SW or a FILM on facts, merits, analysis and also important

To JUDGE a SW / Film properly you MUST BE ABLE to UNDERSTAND the words.

If you like me speak “perfect” English and Italian then a SW or Film must be in either.

It is NOT fair or correct to review and criticize a SW of Film if you did NOT understand
the words completely and absorbed everything that each character said and felt.
Just watching the pictures and understanding nothing of the words/feelings is BAD.