This one deserves it’s own topic and a poll [there’s only Giù la testa… hombre/Giù le mani… Carogna topic so i wouldn’t say it counts]. It shows why sometimes i love to watch those badly made spaghettis. In the beginning Jeff Cameron’s character survives the ambush because he pretends he’s dead [but still blinks his eyes] and nobody even checks out if he really is. Other highlights include: bar brawl triggered by guy punching other one without any reason at all and 10 seconds later everyone in the bar is fightining and Cameron, Mitchell, Pacifico and their men using fragments of bushes trying to sneak to a town where Powers prepared a trap [a very bad one i must say]. My fave bit has to be the one when Cameron gets betrayed by Pacifico [his men shoot at him and he steals the loot] he chases him [in a very bad horse chase] points a gun at him and we get the following dialogue:
Pacifico: 'sorry i underestimated you, friends again?'
Cameron: ‘ok’ [hides the gun]

Kinski’s cameo lasts for something like 5 minutes - he reads bible, gives cameron a dollar, takes part in a competition, breaks up a fight, east an apple and disappears for the rest of the movie, yet he gets a top billing. Gotta love the movie marketing ;D 4/10

Sorry Miles, this one is miles away.

As always, I have to reference the great shobary in posting a comment. He says it its the worst SPW he has seen.

Well there are worse Fidanis, like the one Sartana (in the valley of death?) with Giovanni Scarciofolo.
OK this one is quite boring and ridiculous, but it still has some great scenes, like the one with Kinski mentioned before, where he eats an apple. That’s an all time classic. Or the showdown (once more in the Cave Studios) where the city seems to be hit by an air-raid…

I didn’t watch this one,like many other Fidanis,too.
Think it’s better if i don’t change that

At least one Fidani should every SW Fan watch in his lifetime (but I cannot recommend one!).

That’ll hit the nail on the head

Ok then! Don’t do it! Don’t watch Klaus eat an apple!

HaHa,a pity i can’t see that

Watched the German DVD last, don’t know if it was cut but it could be that some stuff was missing.

I was hoping for some good entertainment since this was the second of the Kinski/Fidani colaborations. Unfortunately Kinski’s screentime is limited to about 10 minutes as is the case in many other spaghetti westerns he appeared in. At least Kinski gave a nice performance as the town priest. Especially the scene where goes ape shit and starts hitting the two guys in the street is pure entertainment gold and Kinski at his best. ;D

Otherwise we get the same old cast of Fidani regulars so nothing new here. Gordon plays his usual crazy self and Hunt Powers and Dennis Colt make their standard appearance here. I found the storyline somewhat messy and confusing but maybe my DVD was missing some material. Of course we have our regular horse riding and poker scenes to pad out the running time like in most Fidani’s. The finale was also typical Fidani style with a laughable assault on a ghost town where the bandits hide behind a few twigs and bushes while they slowly shuffle forwards like in some kind of road runner cartoon. ;D

A little bit more action would have done the movie some good, it just takes too long before anything remotely interesting happens. I caught myself looking at the timer a few times to check if the “adventure” was almost over. But this being Fidani movie i hardly had any expectations anyway. It’s worth viewing once if your are a Fidani fan but otherwise i’d advise you to stay far away from this turd.

I’ve just watch this one, through the italian release (photo under) which has some print damage but still very acceptable.

Incredibly I found the movie very enjoyable. The soundtrack is the same used in who knows how many Fidani’s films, the faces are the same but the plot has some flow, which I liked a lot.

Looks like a Standard and Poor’s evaluation… You’ll probably be rating the really bad Fidani’s as sub-zero.

I liked it, in this spaghetti-western journey I’ve seen movies really awful, and perhaps because of that I know understand why some fellows here on the board consider the tour de force of signore Fidani an achievement.

[quote=“p.pereira, post:13, topic:1235”]Looks like a Standard and Poor’s evaluation… You’ll probably be rating the really bad Fidani’s as sub-zero.

I liked it, in this spaghetti-western journey I’ve seen movies really awful, and perhaps because of that I know understand why some fellows here on the board consider the tour de force of signore Fidani an achievement.[/quote]
one of my top 20 worst words cannot describe how crap it was!

one of my top 20 worst words cannot describe how crap it was!

Well, I’ve already watch seven of Fidani’s westerns, half of his work in the genre. I’ve no doubts that some are lousy attempts of making cinema, but this one is not one of those.
The hand held camera, some shadows here and there occur even with some so called superior movies. Actually the cinematography of this flick is very enjoyable, props to Aristide Massaccesi for that, of course.
Viva Fidani! Viva el rating!

This is my Fidani’s favourite SW ever.
Let’s talk frankly…the film doesn’t really wort a cent and Fidani seems more having fun that directing seriously.
He looks like he’s playing with a toy instead of trying to make the whole atmosphere realistic and credible.

The italian version is priceless: actors talking and complaining in roman slang (a must in every Fidani’s movie…and here you wonder if he was serious or intentionally funny or simply irresponsible)
Jeff Cameron’s name is Macho Callahan and he’s an inspector…Inspector Callahan. Plus with such a first name, Macho…well…
Hunt Powers is Butch Cassidy… ?
Giancarlo Prete is Sundance Kid… ???

I thought that the story if butch Cassidy and Sundance Kid was serious…at least from what I saw from the beautiful american movie. Here they look like a bunch if idiots, goofy wannabe stingers that fight each others for childish reasons.

Gordon Mitchel is playing his worst role ever…skinny as never before, just watch him when he looses while playing poker…his overacting (or non-acting) is priceless

Renzo Arbore - who, of course speaks in roman slang - is a famous cabaret/theatre player/musician/entertainer…a perfect example of total miscast here

The first scene where Ironhead and his bunch of wannabees bandits walk desperately in a row before witnessing the deadly ambush gives you the sense of Fidani’s touch: a great, fast, quick, funny comic book not to be taken too serioulsy.
It’s just the essence of a real spaghetti western, made with great details for costumes but completely empty of any empathic or psychological research. It’s just love for SW, love for shooting a further SW and see bandits and sheriffs fighting and shooting each other, see people riding horses and villages (most of the houses have clearly brick fundaments) more theorical than effective…
It’s just fun in its purest form and I guess Fidani, contrary to many other directors, was perfectly aware of it. I think this movie is the closest thing to be compared to a comic book.

I’ve just made an animated gift for this one.

Screens were taken from italian DVD, Cecchi Gori. The movie is taged with iis original title, despite that the DVD cover goes with “Giù la testa… hombre”.

Kinski, arm in arm with Fidani on set, comments upon old westerns… ;D / The crazy character played by Luciano Conti with his much-loved doll… 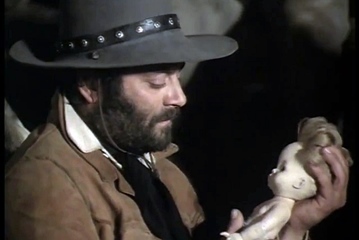 The movie is taged with iis original title, despite that the DVD cover goes with “Giù la testa… hombre”.

The original title is Giù la testa… hombre!. The movie was released in April 1971, six months before Giù la testa, but in those days the title of Leone’s fifth western was already widely known; so the director of A Fistful of Dollars sued Fidani and the title was forcedly changed to Doppia taglia per Minnesota Stinky.

Watched this one with a scoop or two under my belt last night.
I can’t say that I remember much, or understood what was going on for much of the time - I may have even nodded off at one point… but I sort of enjoyed it even though it was utter tosh. Nowhere near his best (Dead Men Don’t Make Shadows), but I knew what I was getting into and will allocate it 1 and a half stars rounded up for Mitchell hamming it up even more than usual.