Yellow Hair and the Fortress of Gold (Matt Cimber, 1984)

The trailer for this was on my old HUNDRA vhs tape. It looked like a lot of fun. Cimber was a good director.

Anyway, in the middle of this right now. Cheap and childish, but also pretty damn violent and sadistic. I sort of like it, as there´s enough going on with some spaghetti regulars in the cast.

The picture quality of the Rhino Home Video dvd unfortunately isn´t too hot.

Average one for me, but enjoyed the Spaghetti regulars in the cast. 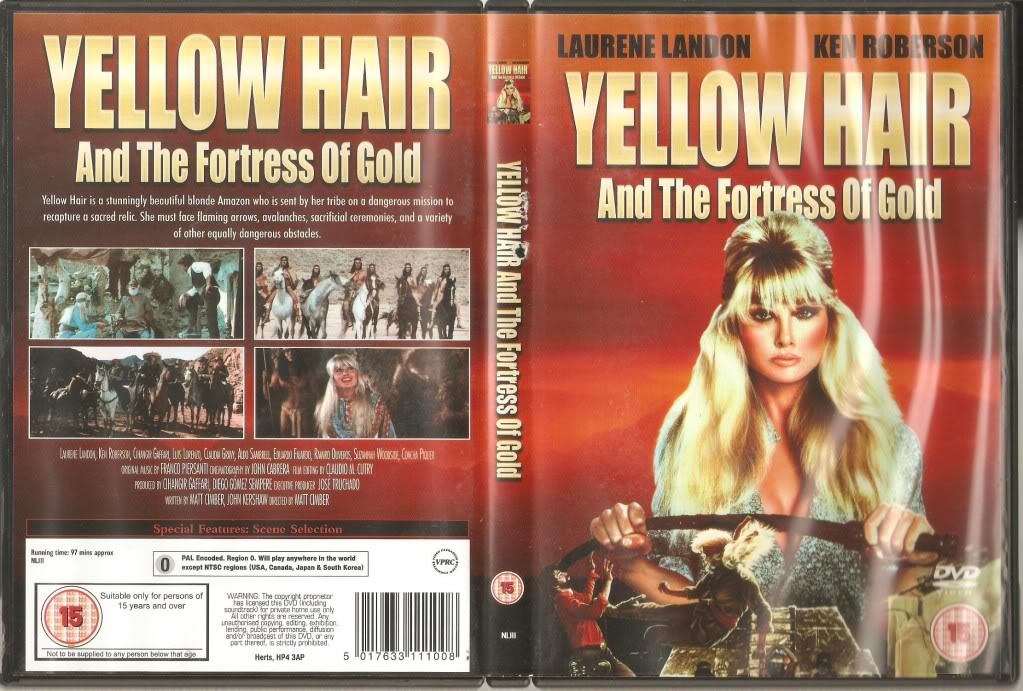 That’s the one I have. Still haven’t plucked up the fortitude to watch it yet though.

(Quote from Phil) That’s the one I have. Still haven’t plucked up the fortitude to watch it yet though.

If you haven’t seen it yet Phil - it’s probably not as bad as you may’ve imagined - and could be worth a watch.
I picked up that dvd on a market stall for a quid and braved it last week.

It spoofingly starts as a returning episode at a Saturday morning pics, with 6 year old ankle-biters getting excited at their local flea-pit and jeering and cheering as the characters are introduced… There are squeals for Yellow Hair herself “Brave, heroic, easy-going” :-; cheers for The Pecos Kid “a zest for life and a yen for adventure” 8); naughty giggles for Colonel Torres "ruthless, greedy and… (he goes all camp and pouty here, with more than a bit of implied homosexuality for our nippers to latch onto) :-; and oohs ‘n’ boos for Flores (Aldo Sambrell) “The vicious mute who leads the fearsome comancheros” >:(
There are other characters - Yellow’s mum Grey Cloud, a gold-digger whore called Rainbow and her ear ringed pimp (who’s name I forgot to write down) - but not nearly enough is made of these - particularly the last two, as that could’ve been great fun. This remains a bit of a lost opportunity - in not fitting in at least an interesting sub-plot with these cartoony characters, who were promised more in their introduction.

Anyway, this nonsense continues to thrill the wee brats with a story of a golden temple hidden in a secret valley that has to be found with a mystical antler horn thing - of course, (as is obvious to all), this does have the sub Indiana Jones thing going on.
But, I’m not sure seeing a couple of fellahs fall prey to the guardians of this hidden styrofoam golden world and having a burning spike stuck through one of 'ems lips before having his head stuffed in molten gold and being decapitated, whilst his friend has his eyelids cut off and is staked out in the sun, is really the stuff these little ‘uns should be watching!
So - we’ll have a bit of kidnapping of Yellow’s mum and Yellow kicking some Indian butt to get back to less violent stuff, before a rather touching scene where we see Col. Torres (resplendent in his underclothes) seducing a young soldier with a bit of wine tasting “Roll it gently on your tongue as if it were a great pleasure.” Oooh er missus! :o
There’s more kiddie-fun with dynamite buffoonery and an un-spaghetti barroom brawl (it’s mercifully short), then it’s off to see the white-bearded blind historian and general mumbo-jumbo ‘Man Who Knows’ (Ol’ Eddie Fajardo) who spills the beans about Yellow’s past/destiny/summat, and off we go on a kiddie-pleasing ‘Raiders’-style wagon ride and fisticuff-fiasco before we all end up in the titular Fortress of Gold. One of the highlights throughout all this belongs to mean hombre Flores who plays a quite comedic role as straight as he can and we find his character… well I ain’t gonna tell ya, cos it’ll probably make you smile as well, should you ever venture into this bit of ‘raiders of the spaghetti’ territory .

The final-ish Raiders-y bit in the temple is soooo low budget that it sort of fails to thrill as it should, but they’ve obviously completely run out of money by now, so they do the right thing and get it over and done with, tie the whole thing off with Yellow, who’s gonna stay and lose her heart to King Indian fellah to be his queen (or will she?)…
Let’s not forget horny boy Pecos and Col. Torres ain’t finished with this yarn yet.
The actual end bit was great entertainment ;D and all in all I was pleasantly surprised by this lightweight, but at times unexpectedly brutal, bit of pantomime.

2 stars is enough though, and best make sure you’ve ‘loosened’* up a bit with a bit of neck-oil first I reckon.

Must be something typically British, never heard of it before

Must be something typically British, never heard of it before

Ankle biters = young kids… likening them (quite rightly) to fleas. Fleapit = run down cinema. It’s what we always called our Saturday morning experience venue. It is such a Brit-thing that there is a cinema actually and ironically called ‘The Fleapit’ over here.

Phil would understand these things

Phil would understand these things ;)

I know he would, the guy even understands American (so I learned on facebook)!

I got those ankle biters, but didn’t get the fleas or the fleapit.

My mother used that saying alot