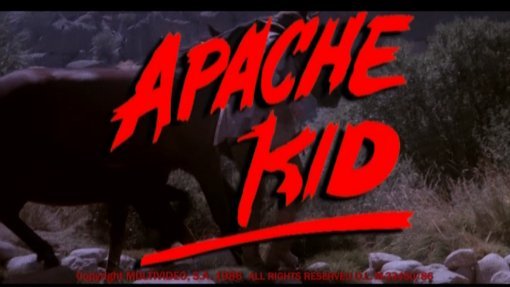 The forgotten brother of Mattei’s notorious Scalps[/url], White Apache starts off very poorly with a comically overplayed massacre and a family film atmosphere of brotherly rivalry. Fortunately the film picks up speed later and has a reasonably effective storyline.

I like it when you mention ;" Occasional wildlife stock footage scenes are of lower quality ". This applies to a few Italian films I have viewed.

Haven’t seen the film, but the opening seems similar to the first scenes of Soldier Blue, while the other aspects (child being raised by indians) remind me of Little Big Man.

During this one I also had a shower and smoked a couple of cigarettes on the balcony. I felt I didn’t miss much upon my returns. SCALPS looks like ONCE UPON A TIME IN THE WEST compared to it. Tape was in quite bad condition too so I might as well throw it in the trash-bin in my next tape clearance.

This one was easily the worst SW I’ve seen so far. Scalps was amusingly bad, this was just boring. And the “occasional stock footage” is like a 3rd of the movie or something.
It did have some hilarious moments, but there were so much parts where nothing happened that it’s not really worth watching unless you’re a Mattei or SW completist.
Mattei strikes again.

Yep, Apaches were supposed to be the fierciest indian tribe but here they’re getting their ass kicked not by soldiers but some posse from local small town.
Sebastian Harrison can’t act but fortunately he’s playing mute for the most of the time, his war cry is priceless and made me laugh everytime. There’s some other unintentional humor like the scene where the angry mob is trying to lynch a man just because he’s not fond of massacring the indians.

Bad film but maybe not as bad as Beyond the Frontiers of Hate or White Comanche. Good thing there isn’t that much Italian westerns about indians as most of them suck.

Yep definatly not as bad as Beyond the Frontiers of Hate.

I thought the funniest scene was where they break his arms with some super powerful kicks.

Oh, and I forgot the scene where the bad guy is burning gunpowder on the indian girl’s chest. It was hilarious!

Looks like I’m in for a treat, just bought the German DVD.

Watched it a couple of weeks ago. Bad, bad.

My entertainometer once gave it a 3/10 (mediocre, but not completely boring)

I remember nothing from the film. The other one from maestro Mattei was better.

I wonder if there’s anybody who thinks this is a good movie.

SD maybe, there’s an actress in it. More than one, actually.

Not the greatest Spaghetti out there, but there is still alot worse than this one for me. One recent one I re viewed which is worse is the super boring Halleluja and Sartana Strike Again!

Not the greatest Spaghetti out there, but there is still alot worse than this one for me. One recent one I re viewed which is worse is the super boring Halleluja and Sartana Strike Again!

Certainly lot the worst spaghetti, that’s true. Stanton says ‘mediocre, but not completely boring’, not a bad way to typify this movie, although I would say ‘below average, but not completely worthless’. Problem for me is that it could’ve easily been a lot better. The premise is okay, but very little is done with it. Mattei is also a rather erratic director, some scenes are reasonably well executed, others seem improvised, not directed at all.

Ha, ha. I sort of like this in alot of ways. Just captures that something re atmosphere of the Spaghetti westerns from years ago. But yes the film is mostly tacky, with the Indians looking to much like the Indians from old U.S westerns. The violence is there, but not used to great effect though. So what do I like …the crap style of it all

White Apache does have that ‘so bad it’s good’ feel to it sometimes. It depends on the mood really. Haven’t watched Mattei’s spaghettis in a while but I seem to remember enjoying this one a bit more than Scalps. I will have to re-watch them back to back.

I tried rewatching it a couple of days ago. Quite awful still. Turned it off after a while.