This one hasn’t had its own thread up till now and I can understand why.
There are highs and lows being a Spaghetti Western completist. On occasion you stumble across a pleasant little surprise, on others you find yourself looking forward to an early death just to make the whole experience stop. Watching this film was, unfortunately, one of the latter experiences. Holy cow, what a bloody mess. I had a pretty strong idea I wasn’t going to like it much just based on the fact that it is a comedy western made in 1974. Enough said. But it was directed by Antonio Margheriti whose films, on the whole, I usually enjoy and who has been responsible for some of my favourite flicks in the genre. So I had hope. This hope was more than dashed. It was screwed into a ball, beaten repeatedly with a jagged implement, set fire to and thrown over a high cliff into oblivion.

Bad concept, bad script, bad acting, bad slapstick comedy, bad bad bad… The only thing which could have made it worse would have been if there was a car in it. Every other bad base was covered. What’s more, it also had an atrociously bad English dub complete with Speedy Gonzales type Mexican accents. In short, everyone involved should be thoroughly ashamed of themselves. It goes without saying that the whole thing goes on for far too long. 15 minutes would have been. But amazingly Margheriti managed to drag this out for well over the average hour and a half too. What was he thinking?

Suffice to say this is, without a doubt, the worst Spaghetti Western I have seen. Forget all the Crea and Batzella nonsense. At least they tried. They were just short of talent and money. Margheriti has neither excuse here. It’s just misguided, badly executed rubbish and not worthy to carry his name.

In case I wasn’t clear enough, I didn’t like it very much.

I’ve seen the Spanish version Fantasmas en el Oeste, and remember being some real weird stuff, a ghost of David Crockett weird very weird, a lot of Spanish scream ladies in it.

Been meaning to view this one for a while, but after reading more negative views thought better get it viewed. The ghost theme attempting to be funny in some kind of way does not work. But sure enough the filmakers keep trying the same things, and that’s when things become tedious. Worst film I have seen by the director regardless of genre. What the director was thinking when he made this I do not know. Worst thing is the film is vastly overlong.

Crap. One of the worst I’ve seen in this genre.
No fun!

Everyone’s heard of ghosts who are batterers and dynamiters! 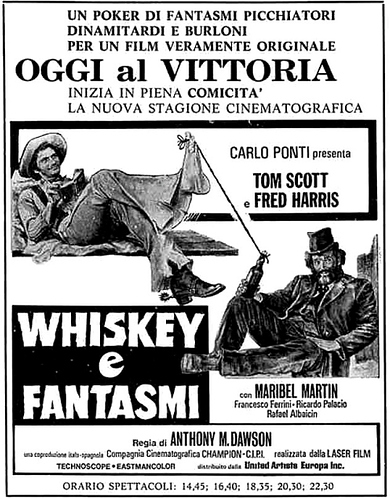 It really is the pits … I was working on a fandub upgrade for CG, but about 15 minutes in I thought, life’s too short! … and I’ve resynced some turkeys, but never abandoned a project because I simply hated it.

Yes this film is tedious as hell, I would need extra beer in if I view this one again.