Which (official) Sartana is the best Sartana film?

Can everyone name their favorite official Sartana movie? I wanna see those votes, so I can see which Sartana is the favorite among experts of the genre.

My favorite one, is oddly one that catches much hate, I Am Sartana, Your Angel Of Death.

I’ll explain my rationale in a breakdown of the series.

If You Meet Sartana… Pray For Your Death

I Am Sartana, Your Angel Of Death.

Have A Good Funeral My Friend… Sartana Will Pay

The number one for me is easy; the last 3 however are close to tied. If i could i would give ’ em all tied 2nd place. Anyway the George Hilton one is the worst anyway!

Anyway Im curious to everyone’s favorite and their ranking.

Hmmm…That’s a toughie. I like all the films of the series, including the odd man out Sartana’s Here, Trade Your Pistol for a Coffin. In terms of multiple viewings, I’d have to go with all three sequels, particularly I Am Sartana, Your Angel of Death. Have a Good Funeral My Friend to me actually has one of the best twist reveals in regards to the dead man and his discovery of gold as you honestly don’t see it coming until it’s talked about.

The inaugural film i still enjoy quite a lot, and the constant red herring’s and double crossing do indeed keep you in the dark, but that Sartana never reveals who he in fact is, even when it’s implied from his coming and going he’s a spectral-esque figure, leaves his motivation for being around a little flimsy, even with the idea that most SW Anti-Heroes are greedy opportunists.

I’ll leave links to my reviews of the Sartana franchise as they better illustrate my rankings. I write under a pen-name professionally as my given name is so common anymore, I was tired of trying to figure out if someone was talking to me or another person…

The Double Crosses Are Endless:

The First, and Most Original, Sartana Film By Tony Nash (A Part of Western Wednesdays) (All Opinions are of the author alone) Se Incontri Sartana, Prega per la Tua Morte (If You Meet Sartana, Pray …

Sartana, the Angel of Death (A Part of Western Wednesdays) by Tony Nash (all opinions are of the author) Sono Sartana, Il Vostro Becchino (I Am Sartana, Your Angel of Death) (1969) PG-13 **** ½ Gia…

Never Pay Someone to Kill a Man…..

Unless You’re Paying Sartana!!! (A Part of Western Wednesdays) by Tony Nash (All opinions are of the author alone) (Some spoilers may follow) C’e Sartana…Vendi la Pistola e Comprati la Bara! … 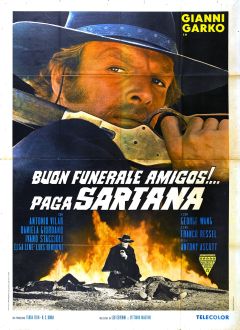 The Swindle to End All Swindles:

Sartana Foots the Bill by Tony Nash (A Part of Western Wednesdays) (Spoilers may be present) (This review is of the Italian language version of the film) Buon Funerale Amigos!….Paga Sartana (…

Everyone’s Out for The Gold: Sartana’s Got His Hands Full

by Tony Nash (A Part of Western Wednesdays) (Mild to Spoiler Free Review) (All opinions are of the author alone) (This review is of the Italian language version of the film) Una Nuvola di Polvere….…

The vast, elegant sandpits are nothing short of breathtaking.

The first film is easily the best one for me. The “gravel pit look” doesn’t bother me at all. It has everything you want from a spaghetti western and it’s much darker than the other films. I liked the insinuation that Sartana is the devil.
I don’t usually include Hilton’s entry into the series because it feels closer to a Hallelujah film and Garko is the only Sartana for me. So, I rate it the other three like this:

Trade your Pistol is probably my favorite even though (or maybe because) it’s more like Hallelujah than Sartana film. Anyway I think all Sartana films are 7/10 for me so maybe the best one is the one I’ve seen last.