What are your unpopular Spaghetti Western opinions?

I didn’t find a similar thread so we go.

Here’s a few off the top of my head…

Brilliant! … I think you’re off everyone’s Christmas card list after that F Bomb - nice one.

A Reason to Live, a Reason to Die is one of the coolest movies out there. It’s a perfect movie with a perfect score.

Uncontroversial:
Leone was a vastly underrated, plagiarizing ego maniac.
Cut Throats Nine is cool
A Reason to Live, A Reason to Die is cool

Srill have no idea what the consensus is about this movie on here, but Shoot the Living, and Pray for the Dead is one of the best Spaghetti Westerns ever made and trumps some other ones currently in the top twenty. 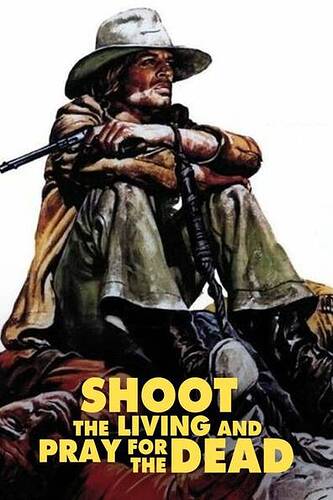 A Reason to Live, A Reason to Die is a great spaghetti western and the majority that say otherwise most likely have never seen the un-cut release

Very well may have seen the cut release and I still put that in my top twenty. That scene where Eli gets them away from the Confederate soldiers by pretending the war has ended is one of the best in any Spaghetti Western.

I’d go along with this. It’s vastly influential, but not nearly as excellent a film as its reputation would indicate.

Once Upon a Time in the West is dull. It contains some cracking set-pieces, yes, but It goes on and on and on, and those individual theme tunes are deeply irritating.

You are right. In the beginning you only hear the harmonica when Bronson is playing the harmonica. And that was cool!. But then the tune keeps coming back, even when he’s not playing. Really dissapointing. It becomes irrittating and the movie is tedious in the end. To me, it’s still a good movie, but not a favorite.