Corrupt lieutenant kills his men for a gold shipment they are transporting. Not long before Fernando Sancho steals the gold, but runs into a spot of trouble. A couple of more men find out about the gold, who eventually team up with Sancho.

Average stuff for me and the colourful performance of scheming Sancho kept me from falling asleep. Think Sabata was on holiday for this one.

Another western from the Balcázar production line, this time inspired by The Good, the Bad and the Ugly. The Bad here is Luke Morgan (the late Daniel Martín); the Ugly is obviously Fernando Sancho, once again playing a Mexican character named Carrancho and the role of the Good is split between a gunslinger (George Martín) and an anonymous bounty hunter (Vittorio Richelmy) identified by some sources as “Sabata”. They’re all, of course, in search of a cargo of gold and forever playing tricks on one another in a story I sometimes could not understand. Early in the story, Luke Morgan shoots Carrancho in the middle of the desert and leaves him behind, although the Mexican is subsequently rescued by the bounty hunter. Later, when Luke Morgan discovers that Carrancho was the bearer of valuable information, he proceeds to mobilize his men to find him. How did he know he had survived? For the rest, this is routinely watchable stuff featuring a pleasingly lightweight score by Piero Piccioni, which bypasses the genre’s predominant style, and making better use of Catalan locations than is common in these films. In the Spanish language version, as usual, Sancho dubs himself and the rest of the cast, including a well-established dubbing actor, don’t. César Ojínaga, a familiar voice in Spanish soundtracks at the time, does his usual bit whenever cast in a western: turning up towards the beginning, being villainous and then being gunned down. So far, nothing new except that, as soon as he opens his mouth, out come the tones of his colleague (and probable acquaintance) Francisco Garriga.

As mentioned by both posters above this is a pleasant enough ride but a bit patchy in places.
Rosalba Neri is criminally under utilised but the film is all the better for the short time she is on screen nevertheless. George Martin is sporting a weird beard which made me smile a bit and of course Sancho’s Carrancho ticks all his usual boxes so I was kept pretty happy when he was about.
Enjoyed it but not a great one I must confess.
Noticed also that the exteriors, which were quite nice, were not the usual locations around Fraga that I’ve come to expect from Balcazar westerns.

Yes the beard is a little on the weird side. Sometimes notice these things more times than others. Whether it’s because I am a little fed up with a film , I just start to drift and pay attension to things I say would normally not notice as much.

Well it was time for a Baltazar I guess choosed this one, thanks to Pereira again

I must say that the Spanish title is quite is better than the Sabata one (beter than the film anyway) Judas Tomas tu monedas/Judas take your coins, sounds catchy. The film is of course pretty average and in the lower side of it, but its entertaining enough, and I didn’t fall a sleep (but I’m not such a hard critic like …Sartana1698 for instance

;D ). Watching Sancho always calling for the Virgin of Guadalupe was entertaining, George Martin not a great actor but he got charisma that’s for sure, the Italian actor was trying too hard to look like Clint Eastwood, Neri like it was said was under used (and I didn’t quite get her part in the story a bit to forced in the plot), Daniel Martin with Sancho were the best actors of the bunch.
I couldn’t avoid some laughs in the when all dressed in black preacher apperead with his false beard lol, and Sancho was good but is no Wallach that’s for sure.
I’ve seen worst, the great thing about spag or paellas westerns is that even in the most anonymous films like this one, something pretty cool comes out of it, in this case was the very good Piccioni score, some parts of it almost reminded me of Philip Glass go wonder.

Like I didn’t fall a sleep and with ainspired score, I’ll give it 3 stars, maybe Sartana1698 would like this one better

i didn’t fall asleep watching this one, but it has it’s moments.

sancho is always fun to watch, g.martin with a funky beard, d.martin as the bad guy and some italian actor who i thought looked alot like john philip law and of course the sexy neri. average at best

poor title of the original sabata

Not bad for a 1972 production, I certainly prefer this one to The Return of Clint the Stranger a.k.a. There’s a Noose Waiting for You… Trinity!: good cast including Daniel Martin, Rosalba Neri and Luciano Rossi, perfect SW look for George Martin, reasonably good duels and in addition… Carrancho’s theme is a hoot!

Saw the poster for this, couldn’t find it in the database. The same movie?

No, not the same. 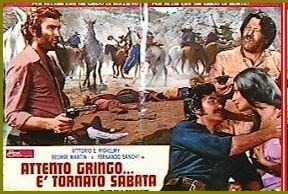 A very average film but it did make me smile. The dialogue was pretty amusing at times. I guess Balcazar never managed to top Sartana Does Not Forgive, which I personally think is one of the best spaghetti westerns made, but at least this one isn’t as bad as his Sacramento movie.