Visiting Almeria for the first time

Me and the Missus (who also loves Spaghetti Westerns) are going next Saturday to Almeria for the first time. Can anyone advise us ad to what we really shouldn’t miss visiting, as we are only there for a week.

Me and the Missus (who also loves Spaghetti Westerns) are going next Saturday to Almeria for the first time. Can anyone advise us ad to what we really shouldn’t miss visiting, as we are only there for a week.

A visit to Albaricoques (the location for the shootout in For a Few Dollars More) is a must for starters and is easly done on your own as long as you have a car. The landlord of the Hostal Alba, Manuel, has led the local authority to put up some signs around the village so you can wander around and spot the places used in the films. The Hostal is also an iseal place to use as a base if you haven’t already sorted your accommodation. Clean, affordable, slap bang in the middle of Spaghetti Western country and benefiting from a warm and generous host. (the aforementioned Manuel) Here’s the link to the Hostal website:

There are also the tourist traps which are the existing western towns. Mini Hollywood (Oasys) has the most iconic building from the Leone films but has become a full on theme park really and somewhat over priced. Texas Hollywood (fort Bravo) is more down and dirty (my favourite of the two) but has less memorable sites. It is more like a proper working western set though despite being quite run down. Then there’s Western Leone, which has the McBain ranch house from Once Upon a Time in the West but nothing else and is a bad rip off for 11 euros. We pulled up into a slip road off the highway and looked at it from there. If this hasn’t put you off too much you can get more of an idea of what they have to offer here: 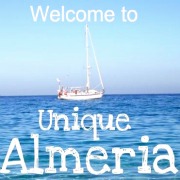 Mini-Hollywood is a Clint Eastwood classic Westerns backdrop in Almeria, built by Sergio Leone in the 60s and it is the film set of his famous Clint Eastwood Spaghetti Western.Take a virtual tour>>

Apart from that the desert scenery itself is magnificent and hosts countless locations where our favourite films were shot but these can be difficult to find for all but the most learned and determined. So my advice is always to contact Tuco Tours, a local company run by an English couple, who run personally designed tours of the area for folks just like yourselves. We have used Tucos ourselves in the past and can recommend them highly. Lovely people who know their stuff and can get you to the spots you want easily. Here’s their link:

And finally, a trip to southern Spain isn’t complete without a trip to the beach and the area around Cabo del Gata has some beautiful unspoiled ones which also have the benefit of being used in some great films too. We chose the Playa de Monsul because of it’s connections to Blindman but there are others. Be warned though, these are not beaches like the rest of the southern Spanish coast. There are no buildings around so no restaurants, bars, shops or anything. Just natural beauty which, if you ask me, makes them much much better. Again, here’s a link to give you an idea of what to expect.

Hopefully that gives you some ideas to work with. It is a magnificent spot and I guarantee you will find plenty to keep both you and your wife happy and wanting to go back.

That’s brilliant - thank’s for the advice. I’ll report back when I return to England.

I also suggest a trip down the road to San Jose and a stop at the Hotel Cortijo De Sotillo which is a hotel but used in FISTFUL OF DOLLARS as the small house where Marisol was kept. also Cortijo Del Fraile, near Albaricoques. It was the mission used in THE GOOD, THE BAD AND THE UGLY. See it before it colapses. A visit to Guadix will allow you to see several of the buildings used in DUCK YOU SUCKER.

[quote=“Tom B., post:4, topic:2364”]I also suggest a trip down the road to San Jose and a stop at the Hotel Cortijo De Sotillo which is a hotel but used in FISTFUL OF DOLLARS as the small house where Marisol was kept. also Cortijo Del Fraile, near Albaricoques. It was the mission used in THE GOOD, THE BAD AND THE UGLY. See it before it colapses.[/quote]Funny enough these were the two locations used for said films in the Rolling Roadshow in summer 2008.

Any good beaches in the town of Almeria?

Well, I dont know if it is any good, but heading towards the sea behind the railway station you can find a beach. Go to cabo de gata for the beaches

Thanks. Probably heading there in a couple of weeks, but a hotel near a beach is wanted. Currently looking for something in Roquetas de Mar.

Why not Retamar or the village of Cabo de Gata. Few people and kilometers of beach between those villages and the dunes that once existed in GBU. I suppose there are hotels in those villages, at least Retamar looks more like a holiday resort than a normal Cabo de Gata village.

Or San Jose and Hotel Sotillo. Thats not so close to the beach but you’d be staying in spaghetti location. Anyway I guess there are other hotels in San Jose closer to the beach.

I would also recommend Hostal Alba if the beach wasn’t needed.