Just a quick one. The Internet is flooded with Videos and articles on unmade Batman and James Bond films etc. I just want to know if anyone has some Genre trivia regarding the topic.

I know Sergio Leone had written a treatment with two other writers for his adios to the Western genre called A Place Only Mary Knows. The plot was about a Con Man from the North and a Confederate Army Recruiter from the South who get together to help the Southerner and his female partner locate the loot they lost somewhere deep in the Confederate States of America at the height of the Civil War. A freed Plantation slave and an Italian immigrant were to join in on the hunt, but whether they were helping the trio or acting on their own is unknown. The Treatment of the film was published in an Italian language magazine and Leone’s son Andrea is supposedly still trying to find backers amongst American and Italian producers to get the project off the ground.

Here’s the IMDb trivia listing regarding the project:
Leone devised a western called A Place Only Mary Knows that he cowrote with Luca Morsella, and Fabio Toncelli. It is speculated to have been Leone’s last western and was to have starred Mickey Rourke and Richard Gere as the two main leads. Set during the height of the American Civil War, the story focused on a Union drafter, Mike Kutcher from Georgia, whose job is to enroll men into the Union army. The other is Richard Burns, a Southern shady businessman transplanted to the North after a successful heist with his ex-lover and partner, Mary. Searching for the buried treasure left behind in an unmarked grave outside Atlanta in “A Place Only Mary Knows”. Joined by a freed slave and an Italian immigrant, Francesco, who arrives via the port of Boston, they try desperately to avoid the battles of the ongoing war between the states.

The film was to have been a homage to classic writers from literature such as - Edgar Lee Masters (Spoon River Anthology), Ambrose Bierce (An Occurrence at Owl Creek Bridge), Mark Twain (A Military Campaign that Failed), Stephen Crane (The Red Badge of Courage), and Margaret Mitchell (Gone with the Wind), of whose novel he had wanted to film a remake. Although the written treatment never got turned into a full screenplay, Leone’s son Andrea had it published in a June 2004 issue of the Italian cinema magazine Ciak. It is unsure if the treatment’s publication will ever lead to a full production in America or Italy.

That’s absolutely brilliant, thanks for that! You learn something everyday! Let’s hope it works out for Andrea Leone!

The only Trivia I can add is from Hammer Films. In the early 1970s Hammer announced a forthcoming project called SHOOT! Now as was common with Hammer artwork came first and two posters were made one as a western and one as a gangster film. The company couldn’t make a decision and the idea was dropped.

I have never been able to find the said artwork, so if anyone has it please upload it.

Are you referring to this one 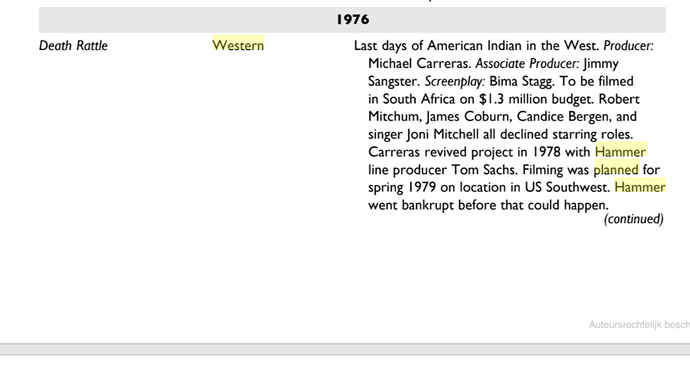 That’s brilliant Lieutenant. I was only aware of the title of this project and the possible release date. I didn’t know it was meant to be a western! Nice one!
Shoot! is a different project. But nothing as concrete as Death Rattle it seems.

Pretty interesting cast. Carreras made Save Guns, of course. Not to be confused with Fidani’s movie, with the same aka.

Indeed. Savage Guns is a forgotten gem to me. It is a shame Hammer went broke before they made it.

Haha, yes. And who can forget the individual topics here for each new title they came up with.

I would avoid putting RISES and UNCHAINED in the title of any film at the moment. People will just think eh they’re ripping off Nolan’s movie etc.

I dug a bit more and discovered that SHOOT was developed into the 1977 kung fu-gangster crap fest SHATTER aka CALL HIM MR SHATTER.