Anthony Steffen is a circus gunman who witnesses the killing of some outlaws killed by bad guy Ken Wood. Steffen is believed by the local towns folk to have killed the men, but this is soon turned into ridcule as Ken Wood beats him in some circus gunplay. Steffen suffers from a complex when faced with violence, and becomes a coward. Steffen is friends with a young boy whose father was killed by the local bad guys, and the boy is now the only person alive who knows where some cash is hidden. Steffen comes to the rescue of the boy, and kills the man who was beating the boy. It is this that breaks the mental block that Steffen has with violence. With the help of his circus friends Steffen faces the bad guys like never before.

For most of the film Steffen is cast against type and makes for interesting viewing. The english dub voice of the Steffen character sounds a little more sensitive than his usual english dub voice in my view. Well worth a look if you have not seen before.

Viewed an english audiodubbed Italian T.V print in around 1.85 widescreen with english subtitles for the bits that did not have english audio.

Steffen shows more range than he usually does in this. I never thought I’d say this, but his acting was even quite ‘subtle’ in a few scenes, especialy the scene at the beginning where he chickens out but later gets credit for killing the five men. Th look of cowardice on his face is classic.

Also we finally get to see him Twirl his gun.

Nello Pazzafini and ANdrea Bosic also play against type. They’re both good guys in this!

And nice to see Ken Wood in a large role.

I have seen this movie several years ago on Italian television.
Unfortunately I have not understood a word. This was not a problem. ;D
The film is typical Ferroni. That is very much like an American Western.

Some story elements reminded me of Boot Hill. Them to music by Carlo Rustichelli. (Boot Hill, however, is better)

However I found the costumes very ridiculous.
The film seems to be very rare.

I find him no better and no worse than other films of Ferroni.

I suspect I watched the same fandub as Ennioo and like others have mentioned it is interesting to see Steffen playing against type. The thing that got me about this one is the traditional American style of it. As I was watching I was guessing it was probably made about 65 or 66. But 68? Wow, you would never think it. Almost Saturday Matinee in feel. Which is no bad thing for me as, despite liking a nice gritty Spaghetti as much as the next guy, I have a soft spot for the older cornier style of westerns too so there was plenty for me to enjoy here even though there are clowns and kid in prominence.

Nice to see Luisa Barrata too although a shame she is used strictly for window dressing. Always thought she had more to offer if given the chance.

Never seen it. Sounds interesting, I always liked Ferroni, and his films get better with the years, so it seems. Recently rewatched One Silver Dollar, and noticed what a fine, warm movie it is. Ferroni had reached middle age when the craze broke out, so most probably he had grown up with the Saturday matinee material Phil is referring too. I’ll most certainly give this one a try soon.

The last Sw I watched, not bad for a heavily classic western influenced SW. If it wasn’t for the usual Italian locations, and if I didn’t known the actors, for me this would have been a regular US western, even Pazzafini looked more like someone from Brooklyn.
The story at start looked like the usual revenge one, with the kid avenging his father dead, but it turn out to be a bit different, for the better I think, nothing amazing but well done, there’s something taken from Shane in the film mostly cause of the kid, but still I enjoyed.
Antonio Luiz de Teffe made a performance in effort not an easy part to play if we think about it, also both Richard Wyler and Giovanni Cianfriglia made some very nice villains in what was big upgrade in the film. The final showdown with the Circus strike force for the rescue looked nice, so I guess Colizzi didn’t start the Circus thing.

So yeah I liked nothing spetacular, but nice to watch and kind of reminds us that Euro western were many times mere copies of US Western, or even better were US Classic Westerns made in Europe.

Watched so much Steffen films lately that became curious about the man, viewd some interviews he made in Brazil and read his biography, found out some nice and intersting things about the guy, for instance he fought the nazis with the Italian Partizans still in his teens (didn’t had more than 14/15 years old), he didn’t like riding horses, and didn’t know how when he did his first spag, lying to the director (Mulargia) about that, also known as free spirit men, he once said “…There’s no constitution that forces you to marry…”.
After all one of the few SW stars (does Chris Huerta count as a SW star?) that speak Portuguese.

I wish I knew Portuguese so I could read his bio also. I heard an english translated version was being worked on but I don’t cross my fingers.

Yep, this one is on my list to get.

I wish I knew Portuguese so I could read his bio also. I heard an english translated version was being worked on but I don’t cross my fingers.

Been hoping for the above as well. Would snap it up right away.
Not a surprise that this has American influence as Ferroni’s other three tend to as well (especially WANTED).
Out of his “trilogy” I really enjoy the first one and consider it a classic. Don’t remember much from FORT YUMA GOLD except that it was too ambitious and WANTED is perfectly serviciable (I remember it’s one of the few Spaghettis where they actually shot a scene meant to be an exterior in an interior).

For more on Steffen, here is an Italian interview I found on youtube recently

Having seen so many spaghetti westerns, I’m a bit stuck with turkeys and/or movies starring my least favorite star, yes: Anthony Steffen.
But I must admit, this one’s okay and Steffen’s not bad as the coward: 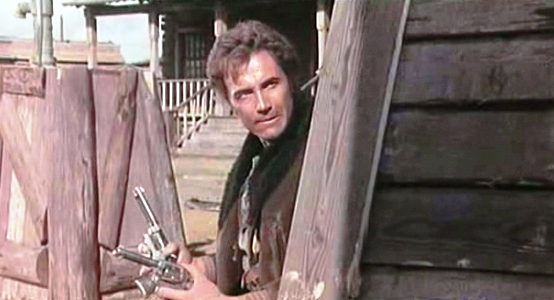 Steffen and Ken Wood good in their roles… but had the same problem with this as Tequila Joe, not much fun watching Steffen unable to shoot people until the last 15 minutes… the duel at the end was ridiculous as well, maybe on the same level as the one in Django Kills Silenty where George Eastman lets himself get shot at