Is someone planning to get this movie recently released by Onar Films?

Maybe something for you ENNIOO since you like Bronson?

Looks interesting Lindberg !, and judging by the trailer looks a little more explicit than Deathwish. DVD is limited to 500 pieces.

I’ve got it, well worth a watch.

The only real difference is that he gets the scumbags who fucked up his family. 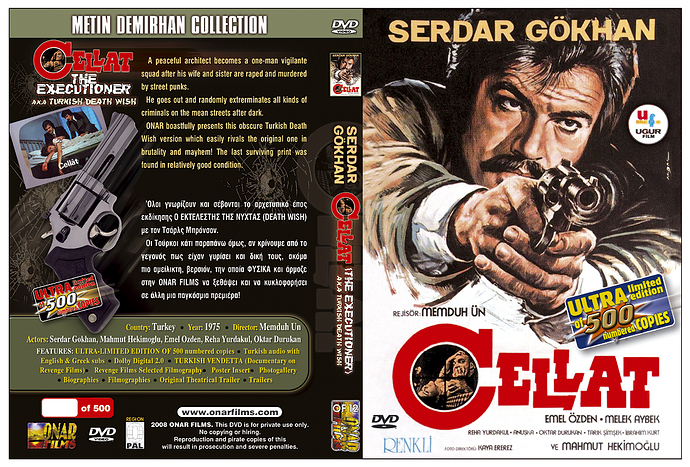 Cover reminds me of a cover to Revolver.

I got this from xploited too. I’m waiting to watch it with a friend of mine so I have not viewed it yet. But there is a short “documentary” that is an extra. It’s called Turkish Vendetta (I HAVE watched this). It is A TRIP! Jesus, if you think Spaghettis are misogynistic, the Turks take it to a new level.

A buddy of mine and I (after multiple viewings of the trailer) are constantly leaving emails and voice mails saying only “Cellat…Cellat…Cellat”.

He has a trippy Turkish film called Lady Terminator. I have not seen it but I will soon!

Check out the trailer (and buy it from xploited!):
http://xploitedcinema.com/catalog/cellat-executioner-p-14186.html

Also, the DVD comes with a small, cool mini-poster that folds out to about 81/2 x 11. Its the artwork from the cover. Nice

I can’t believe I’m saying this but I really expected this film to be a lot more violent. Don’t get me wrong, it is no kids movie but, based on scenes I’ve seen from other Turking films, I expected lots more mean spiritedness and gore. Pretty standard remake of Death Wish (the guy is even an architect).
The three baddies who do the dirty deeds to the main character’s family look like a Turkish version of Crosby, Stills & Nash. Three drug addled older hippes.
But the movie was great fun.
I highly recommend the docu Turkish Vendetta (an extra). It is not very polished a film but it has great scenes from other Turkish revenge movies.

I just got this one from exploited and watched it straight away.
And I must say that it lived up to my expectations.

[quote=“Dorado, post:9, topic:1416”]I just got this one from exploited and watched it straight away.
And I must say that it lived up to my expectations.[/quote]

Or it lived DOWN to your expectations LOL

Onar Films should release some Turkish westerns too

Better than I thought it would be this. Super low budget but moves along at a pretty good pace, with some crude violence at times. Like already pointed out I like the fact the hero gets the creeps who attacked his wife and sister.