Top 25 most murderous directors of all time

Top 25 most murderous directors of all time… 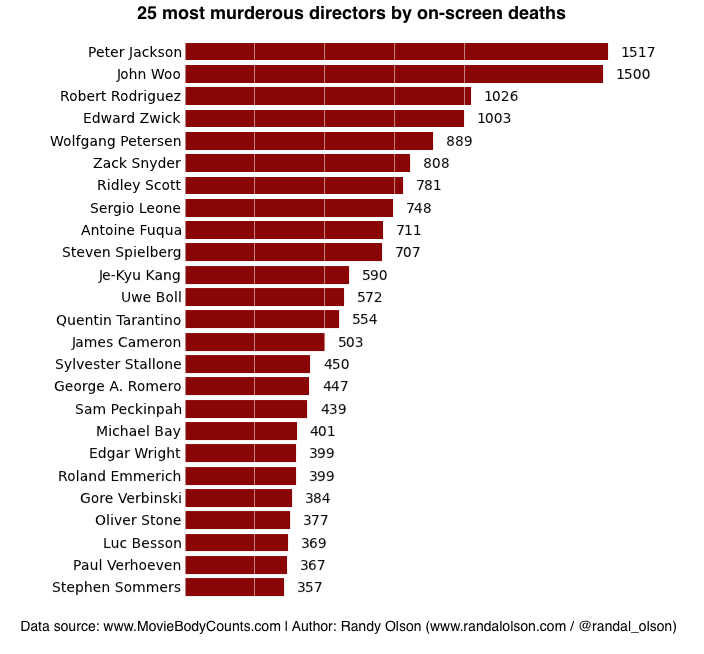 Top 25 most murderous directors of all time

Last weekend, I discovered a web site where a group of dedicated film fanatics have been systematically counting on-screen deaths in various films for several years. I immediately set out to scrape…

Cirio H. Santiago, Director: Water Lily. Producer/director Cirio H. Santiago is the son of Dr. Ciriaco Santiago, who founded Premiere Productions in Manila in 1946. He has two siblings. After starting out as a producer he started directing...

Where do all the casualties for Leone come from? Duck you sucker maybe, don’t remember that many killings from his other movies. I would have said that Peckinpah kills more people in the finale of The Wild Bunch amone than Leone in all of his movies.

List is incorrect anyway. Some Philippino war/action directors should have made the list (hundreds die in those and there are directors that made dozens of those), Godfrey Ho probably, my gut feeling says Takashi Miike and others I will think of later.

Not a film director, but a music “director” Phil Spector sohould be in that list, as the real thing.

I think Corbucci would be high on the list if someone does the counting.

I think Chang Cheh should probably be on that list.

[quote=“scherpschutter, post:4, topic:3390”]Where do all the casualties for Leone come from? Duck you sucker maybe, don’t remember that many killings from his other movies.[/quote]That’s what I thought. There’s probably more deaths than we think in it, how many executions up against walls, all the bodies in that pit etc. They’ve probably somehow attempted to work out the amount of people killed in the train crash.

When I’m typing this I just had a thought, how many people would that lava have killed in Last Days Of Pompeii?

I think death must be seen on-screen, so I’m not sure if bodies in the pit in DYS should count, etc. Otherwise Kubrick should be on that list too, because he dropped the a-bomb, and Lucas would be candidate for the 1st place because he blew up entire planet (population 1.97 billion according to wiki), right?

I think they have just included the great directors, not the others.

Carnimeo should be on there lol.