A very obscure and hard to find western. Strange since it stars Robert Mitchum. Anway, this is a pretty fun film. It is set in 1920’s Central America. A Defrocked priest, Irish bootlegger, and English arms dealer are forced to free a town from the grips of an evil landowner by an army colonel. Great mexican locations and very euro influenced. Similar theme to Red Blood, Yellow Gold and Dirty Dozen. Has a strong douse of black humor and bloody violence. The action scenes are perticularly fun since most have the participation of Tommy guns, automobiles, or handgrenades. Robert Mitchum is good in this one. Also stars one of the rapists from Straw Dogs, Ken Hutchison. Also, Boot Hill’s Victor Buono in a very strange perforance. He seemed drunk the hole movie and still able to fire a shotgun without cringing too much. And finally, Ralph Nelson directs a western that is not preachy. Probably because their is no subject to preach about. Highly Recomended. Starring Robert Mitchum, Ken Hutchison, Victor Buono, Frank Langella, and Rita Hayworth in her last role in any film. Directed by Ralph Nelson.

It wasn’t a great one, but pretty good and fun movie. Korano summed it up pretty nicely, but i have to add Frank Langella made a very good creepy villain.

I’m dying to see this, I love Duel at Diablo.

I’m afraid the only version you’ll be able to get a hold of s a DVD-R.

Like already mentioned very surprised this is not available on Dvd. However, the TCM T.V print is in 2.35 widescreen and is ok quality. Range of actors in this from Robert Mitchum playing a machine gun totting priest, to an arms dealer played by the very large Victor Buono. Always find Buono very watchable. Enjoyed the action, and there was one violent scene I did not expect or see coming. Score by Lalo Schifrin. Fun film which I had not seen before, and glad I did.

Released by Warner Archives this month… 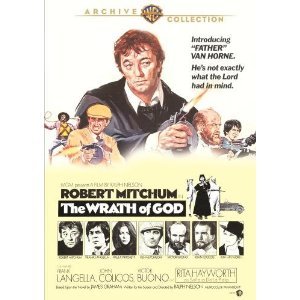 Re viewed this one. Still holds up. Good cast with the main trio bouncing off each other so to speak to good effect. Its just a fun film for me with some nice action. The score by Lalo Schifrin is one of his best. A nice blend of some of his usual style from around this period with a heavy slice of mexican influence. Mitchum may not be a true machine-gun toting priest, but he does a fine job

Machine-gunning priest you say? Think I’ll be watching this tonight 8)

In a fashion yes, enjoy

Have watched The Wrath of God & found to be a interesting blend of many SW characteristics with a distinctly American looking film. Although made in '72, has the visual style of an earlier classic western, but with the darker and sometimes quirky SW elements. The soundtrack also has more of a classic film-score sound than a spaghetti sound, and overall this combination of factors made it an interesting viewing. American westerns with this more classic visual/audio style don’t usually have this SW kind of violence, characters and quirkiness.

The machine gunning towards the front of the film with the preacher is a really excellent scene, and has lots of great action throughout the film.

Definitely a lot of fun

Better than average, but I think 90 minutes would have been more than enough. But, very watchable film.