Just making my way through the new Simpel Movie Region 2 release … Fun little movie, pretty much a DEATH RIDES A HORSE ripoff but with a cast of mostly new faces aside from Louis Iundi as an ineffectual sheriff & Massimo Serato as the black hatted villain. The English language dub sounds like it was lifted from an old home video release but the color is very nice, the widescreen ratio looks correct and at 99 minutes PAL it appears to feature the entire 103 minute length cited on the IMDb. There’s a bit of surface damage to the source but it’s definitely a new transfer, fairly crisp and you can see the extra makeup smeared on some of the supporting characters who are supposed to be Mexicans.

There’s also some uproariously politically incorrect dialog and a couple of nice riding scenes where they pass through the old sandpit. But for the most part this is a fairly unique looking movie, I don’t recognize the interior sets from anything I’m familiar with and it’s nice to see some different faces for a change. There’s no link for it yet at amazon.de, but here is the cover: 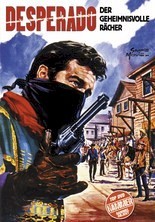 The thing that interests me the most about this movie is the year it was made: 1968. From the way I reckon things there are four or five specific periods of evolution that Spaghetti Westerns went through. A “Pre-History” period of roughly 1962 to 1964, and “Experimental” era from 1964 to 1965, the “Classic Era” 1966 - 1969 period, a “Revisionist” era from 1970 until maybe 1973, and then a 1974 - 1977 “Parodic” phase where the genre started to consume itself and fell into decline. There is of course overlap between each of those segments (i.e. Corbucci’s first DJANGO film has an experimental era nature to it but technically falls withing the classic period) and there was also the resurgence era in the mid/late 1980s with films like SCALPS and DJANGO RIDES AGAIN.

But 1968 is an odd year, there seems to have been a push/pull effect going on with most of the films from that year which I have been fortunate to see, with Leone’s ONCE UPON A TIME IN THE WEST being the defining moment from which the genre received a huge burst of confidence by having the Italian/Spanish industry produce a film that was on the same epic scale of stuff like THE SEARCHERS, but without the iconoclasm of THE GOOD, THE BAD, AND THE UGLY.

There was a resurgence of Experimental approaches that seems to have started after two films in specific from 1966 and 1967, DEATH RIDES A HORSE and THE BIG GUNDOWN (some might also cite DAY OF ANGER as another), which are almost “pure” examples of the Spaghetti genre in the sense that they are nearly devoid of any over references to American Western genre filmmaking and have their own unique vocabulary that is generally unconcerned with making a traditional cowboy movie. The films have a flavor and look that becomes an idiom unto itself, and in my opinion the result was a conscious attempt by some of the filmmakers to try and delve deeper into this vocabulary of filmmaking and create forms that were as unconcerned with traditional Western conventions as Leone was with appropriating those conventions and turning them on their side.

The result was movies like THE MAGNIFICENT TEXAN which seem to have their own flavor: They are readily identified as Spaghetti (and in this case feed off DEATH RIDES A HORSE) but have what I can only describe as a dynamic tension that harkens back to the experimental era where oddball combinations are paired to create a juxtaposition between the “serious” look of a Western and something more resembling a cartoon or graphic novel – DJANGO functions in a similar manner. Another good example of this oddball dynamic is Jose Luis Merino’s REQUIEM FOR GRINGO, which is a bizarre movie regardless of genre and seems completely unconcerned with the “reality” of the Western as a genre, and instead uses those conventions (gunfights, horses, whiskey, cowboys) to create a unique form. BEYOND THE LAW would be another example in that it seems to take a step backward from the stylistic excesses seen in stuff like DEATH RIDES A HORSE and the Leone “Dollar” films and instead almost tries to be a traditional cowboy movie – which is what I am seeing in THE MAGNIFICENT TEXAN, even so far as to include a Lone Ranger type hero wearing a mask & living a dual identity. But at the same time the visual vocabulary being used is 100% Spaghetti right down to the good old sand pit scenes and overt violence (in one scene a woman gets a rifle butt smashed into her face) that would never be acceptable in a Hollywood style production.

So 1968, an interesting year for Spaghetti in that it seemed to spawn two different approaches: An epic approach ala ONCE UPON A TIME IN THE WEST and TEPAPA, and then a more cartoon like approach best exemplified by the “Sartana” series with Gianni Garko, which also got it’s start in 1968. By 1969 these two formulae had branched off into separate methods of approaching the idea of making a Spaghetti Western, but in 1968 they seemed to see a combination within individual films, and the result is a very unique “feel” to movies like THE MAGNIFICENT WESTERN, which may not have contributed much that was new to the idiom so much as continuing those skeins that came before.

Why do you call the 65 SWs “experimental”?

I would call these SW phase (which lasts imo from FoD until the success of Django made his impact on the productions from 66 onwards) simply the early one, with most of the films relying heavily on patterns set by 50s american westerns, with often surprisingly few influences from the Leone films.

The “real” SW style seems to emerge not before late 66 (except for a few films, mainly Leone’s 1st two and Django). And this I also would call the classic era which lasts from mid 66 (Django’s theatrical release) until 1969.

Very interesting /detailed posting Squonk . A good analysis of the SW history.
My own FAVOURITE year for Both SWs and USA Westerns is

I regard the GOLDEN ERA of SWs as being approximately 1962-1971
from the earliest Pre Leone outstanding SWs from Spanish directors like the prolific
Joaquin& Rafael Romero Marchent to the beginnings in 1972 of the Idiotic “comedy” SW
:’(

The Magnificent Texan 1968 is a top notch quality SW.

Very interesting historical view on the SW, Squon (People call me Scherp or even Sherp, so Squon will be acceptable, I suppose).

I’ve been thinking about an overview of the genre too. My ideas are not always completely identical to yours, but that makes things even more interesting (at least to me). I’ll give you an ‘answer’ real soon.

But maybe we should create a special thread for such a discussion.
SW History ?
History of SW ?

Or maybe we should simply retitle this thread (It’s obvious that Il Magnifico Texano will not be the most important movie discussed!)

By the way: I’ve never seen this movie (one for the eeeeveeer grooowiing LIST)

Does it have any static noise or such problems? Cracky soundtrack taken from damaged VHS pretty much ruined Simpel Movie’s Vendetta at Dawn DVD for me.

[quote=“scherpschutter, post:5, topic:832”]…I’ve been thinking about an overview of the genre too…

…But maybe we should create a special thread for such a discussion.
SW History ?
History of SW ?[/quote]

Excellent idea, do that!

By the way, Lindberg, there you have now a very beautiful picture of the two girls from Fucking Amal.

Yes, yes, it was, very touching.

I didn’t see this as a rip-off of a Death Rides a Horse. To me it looked more like a Zorro film with a masked avenger and romantic subplot. Capuano also directed three Zorro films so that was probably his specialty. Disappointing film. His another western Blood Calls to Blood isn’t that good either.

Simple’s dvd release is good though, sharp looking and the english audio was ok to me.

I tried to watch this one last week (Greek vhs), but turned it off after 10 minutes. Looks like a very bad movie.

Bill’s right, this is a Zorro picture brought forward a few years and without swords. And as such harks back to a very old fashioned style which, in the English dub anyway, features some laughably corny dialogue at times. As a result this is unlikely to impress many fans of the ‘gritty’ Spaghettis. I’ve seen worse but it really isn’t very good outside of De Massi’s score which I’m sure I’ve heard elsewhere too.

I couldn’t sit through this again. Maybe not among the worst of the worst, but certainly bad and cheaply made without any hint of inspiration.

Glen Saxon and the nephew of the Judge looked similar in certain shots, but my mind sorted it eventually. Saxon is the Zorro character, out for revenge for the people who killed his family years ago. No cape but a poncho instead. Covers his face to a degree, but any fool can tell it is Saxon. So can see why Death Rides A Horse was mentioned in earlier posts, but more like a Zorro flic than anything else. Mild atmosphere to the film, except towards the end, reminds me of the style of earlier Zorro films. The Judge… what a slimeball he is. Could have easily trimmed 15 mins from the running time. Some serious padding out of the film at times, like Saxon in charge of some girls who are doing a supposed fashion show with fringe benefits. Simple dvd is outstanding picture quality, with the english audio fine aswell for me (probably from a vhs source like mentioned). Now the score…which other film is it used…

I couldn’t sit through this again. Maybe not among the worst of the worst, but certainly bad and cheaply made without any hint of inspiration.

That’s what I thought as well, has a good opening scene but declines as the film goes on.

I couldn’t make a Have out of a Have-Not: 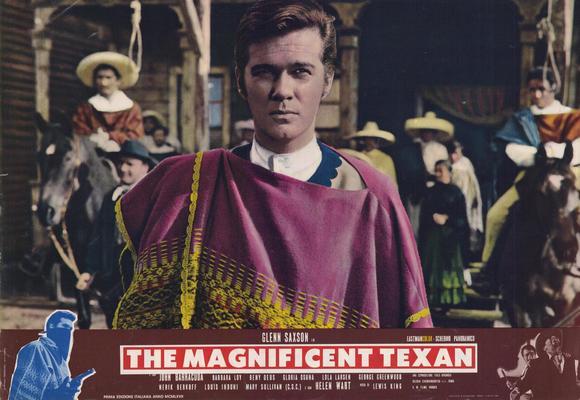 Starting with both a fiery massacre with a body burning to death, and an annoying blarting kid, this could’ve gone either way before deciding to be a melodramatic slice of spag pie. It was helped by a sharp print, but otherwise this Zorro-esque offering failed to set me alight. It wasn’t a snooze-fest either though, and I remained reasonably entertained by never being able to pre-guess what was gonna happen.
Glen Saxon looked an unlikely Mexican but played it pretty well despite the orange make-up. I couldn’t help it, but kept imagining Robert Woods doing a better job though in the unlikely mexi-stakes. And with that in mind, and to compare Zorroismic spags, I’ve dug out Starblack for its first viewing very soon.

Half marks, scaled down for not having as gritty ending as it had at the start, and for getting tooo sloppy