Rock Hudson gets to gun down Lee van Cleef. Guess the title

Watched The Hellbenders, only watched it on YouTube before, but just got hold of an English language dvd for less than a £5…maybe imo alongside Great Silence as Corbucci’s most mature movie 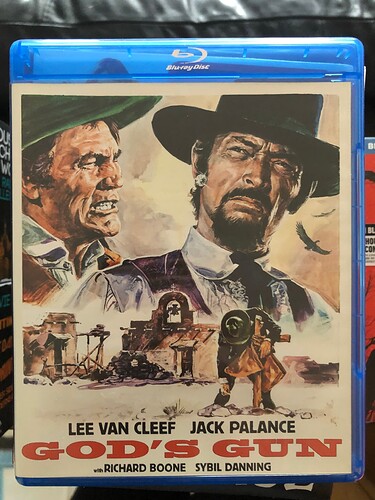 There are Blu-rays you know, no need to give yourself eye cancer;)

Couldn’t resist the price, when I find the blu-ray release at a good price I will upgrade… Can’t complain about the dvd print too much… It was letterbox and pretty clean

I’ve been working my way through all the old westerns André De Toth did since first watching Day of the Outlaw (1959) which I absolutely loved. He only had a writing/story credit on The Gunfighter and I think I would have liked it much better had De Toth directed, but it was way too talky - basically 1hr20m of a guy talking to people, but with an excellent ending which somewhat makes up for it all.

I enjoyed Springfield Rifle much more, despite going in with low expectations due to my general distaste for civil war related movies. Well, similar to many spaghetties, the civil war is more of a backdrop and not really the focus of the movie. De Toth really knows how to make an engaging movie that looks great as well. I was never bored or waiting for things to move along, instead absorbed and enoying the show - something I’ve found with most all of his work. Watched an excellent HD print from Amazon, once of the best Amazon HD transfers I’ve ever seen - rivals many blu rays.

I’m probably going to have to rewatch Day of the Outlaw again soon, since its getting cold and we’ll probably see snow soon.

I’ve got the DVD release which features a commentary track by Andre De Toth, but haven’t gotten around to listening yet. Pretty curious to see what he has to say

Wild Bill (1995) - Starts out with quite the bang! Got to be one of the best openings to a western I’ve seen. I figured it couldn’t keep on at this pace, and it surely didn’t. The film as a whole is uneven, more good than bad IMO but is brought down a lot by the overuse of black & white flashbacks/opium dreams. I know these scenes are supposed to be stylized but they look terrible - it would have been better if they were just plain black & white instead of this SOV look it has which becomes super worn out. Maybe would have been alight if it was just a few very short scenes, but these scenes are extended and take up a large portion of the movie. Lots of heavy rain scenes which always works in my favor

Oh, and what a miscasting on Calamity Jane… jeezs

The Long Riders [1980] - Following up Wild Bill with another Walter Hill western. Liked this one quite a bit also. Lots of stylized violence but also a bit of a slow burn to start out. Overall fairly accurate to the real life story of the James/Younger gang, moreso than most films I’ve seen

We did a Walte Hill episode on the FC podcast a while ago did u check that out?

I don’t know what the FC Podcast is?

I will check it out

Continued the Walter Hill multi-feature super mega watch with Broken Trail - a 2 episode TV miniseries from 2006. Robert Duvall’s presence as one of the lead makes it feel a bit similar to Lonesome Dove. Despite being made for TV, has some very violent scenes, but I guess it was made for AMC rather than regular network television. Pretty good, another good notch for Hill