The Last TV Series You Watched

Just watched series 5 (I refuse to say ‘season’) Some classic moments, but not as completely satisfying as the previous episodes … a slight dip in quality, but still great fun. The huge vagina episode is outrageous and hilarious without being vulgar.

The American version of ‘The Office’ is embarrassingly bad … every actor in it appears to being trying so hard to be funny or wacky, and failing.

The original was played straight and the comedy came from the writing, not a bunch of 3rd raters attempting to outdo each other.

Finished Goliath. So it is about a brilliant drunk who goes against the greedy corporations…

The American version of ‘The Office’ is embarrassingly bad … every actor in it appears to being trying so hard to be funny or wacky, and failing.

I enjoyed The Office (US) past the limp first season without ever being blown away by it. The fact I’ve only watched it once (and, tbh, can’t remember any of it) tells its own story I guess. But I know I liked it while I was watching it, although it fell away quite a bit in the last couple of seasons after Steve Carell left the show.

Have you ever seen Veep, aldo? It’s fundamentally an American reworking of The Thick of It. I only mention it because what you wrote about The Office - every actor seems to be trying too hard to be wacky etc - is exactly how I feel about Veep. See, I think the Americans can do dry or nuanced humour when they write it for themselves but they struggle to replicate it when they’re translating it from abroad. Of course, we struggle to translate their humour too, to which anyone who remembers Russ Abbott’s Married For Life (the UK version of Married… With Children) will surely attest.

Have you ever seen Veep , aldo?

Though I know it had some very funny moments, the inevitable splurge of obscenities from Capaldi’s character, became tiresome. If ‘Malcolm’ was really so upset with these weedy Politicians and their aids, wouldn’t he just leave, rather than risk a heart attack … or perhaps it was just a Scottish fantasy to humiliate so many inept, privileged English types ??? Funny, but not classic.

Of course, we struggle to translate their humour too, to which anyone who remembers Russ Abbott’s Married For Life (the UK version of Married… With Children ) will surely attest.

Poor Russ Abbott … he was okay at very lightweight family friendly stuff, but so many wrong career decisions. Naff is the term that comes to mind.

DOCTOR WHO - the Sylvester McCoy years. Not everyone’s favourite but I really like his Doctor. I met him in 2013 at the local Comic convention with Paul McGann. I was really touched by McCoy’s passion for the series. 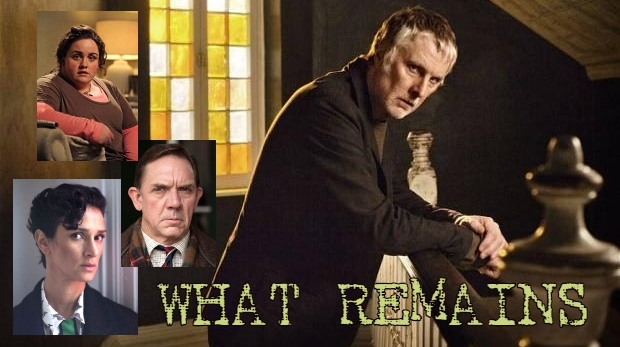 A four part miniseries that was almost unanimously praised by critics, and deservedly so. In the loft of a tenement house the body of a former resident is found, a twenty year old, overweight and unpopular girl called Melissa. The body must have been there for more than two years. A former police detective continues to investigate the case after his retirement, because his former colleagues seem no longer interested.

Sounds like a classic whodunit, but with the action almost taking place within a tenement house (rather than the traditional country manor), and some influences of gothic horror, it often feels closer to a Giallo than a British detective story. It’s not entirely free from cliché and the double twist-ending may feel a little far-fetched (when you think it’s over, it’s definitely not over), but it’s also tremendously suspenseful and very, very well acted by a fine ensemble cast, headed by veterans like David Threlfall (as the retited detective) and David Bamber (as one of the residents/suspects) . Kudos go to Indira Varma as a particularly bitchy graphic designer. Most characters are unsympathetic, but the story is as much about alienation and loneliness as it is about murder, and all people involved are afraid of becoming as lonely as the person who was found dead above their heads.

I must be one of the few who was not blown away by the First season of this anthology drama series. I was already a bit sceptical and therefore decided to wait until the hype was over to watch it. I forgot about the whole thing, but then stumbled, in full Corona times, upon the third series, starring Mahershala Ali and Stephen Dorff. That third series was excellent television, offering multi-dimensional characters and a compelling story line with no less than three time layers. It was also tremendously well acted, especially by Ali, but unfortunately it was harmed by a disappointing finale. Nevertheless:

Admittedly the first season has a better finale (that final episode in the lair of the beast is a journey through hell), but I found the whole thing a bit overwrought and while there are only two timelines, the story-telling is less fluent here; I actually had the idea that it would’ve worked better if told in chronicle order (with an occasional flashback). It remains of course good television, beautifully shot and atmospheric, but I saw no reason for this hype. I’m not a fan of either Woody Harrelson and Matthew McConaughey, but they do well here (especially McConaughey). One thing about those thick Southern accents: both actors were born in Texas so I guess their accents were authentic (I don’t know really), but I wouldn’t overdo these things; I must admit that this slow slow talk quickly started working on my nerves.

Recently I watched V: the original miniseries and The Final Battle (all five episodes feel like one series to me). Normally I will stop there since it’s one of my favourites and I always thought that the 19 episodes that followed were pretty terrible. This time I decided to rewatch the entire series and I was surprised by how much I enjoyed it. I seem to have forgotten about how many entertaining episodes they actually made and dwelled more on the last few, which began to imitate the likes of Dallas and killed it off for good. Despite the flaws, the bulk of the series is actually pretty great and if you’re a fan of V in general, it’s definitely worth a watch as long as you can take it for what it is. I’d say it works better as 18 episodes (just skip the 18th episode, The Secret Underground, which adds nothing to the story and feels like an entirely different series)

Not familiar with the story at all but I know the imagery. 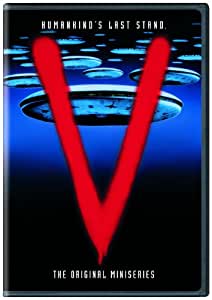 Watch it! Definitely worth it

Currently watching (or, well, waiting for new episodes to get Engish subtitles) Kirin ga Kuru. It’s a Japanese historical drama (they make one of these every year). My other big passion besides western has always been jidageki, so I’m really enjoying this

It takes place in the Sengoku Jidai, aka that bit in history of japan where the whole country was in pieces and everyone was fighting each other. The main character, Akechi Mitsuhide, is for now just an ordinary samurai who dreams about a peaceful land (the Kirin in the title is a mythical creature that allegedly appears once there is peace), but those who know how history goes know he will be involved in some BIG drama

Just finished watching Shaka Zulu (1986). Excellent miniseries about the Zulu king. Crazy to think the UN tried to blacklist all the European and American actors who took part just because it was a South African production. It brought a lot of work to the Zulu people themselves, including technicians. Hardly a negative thing!

Despite being knee deep in Spagvember the wife and I are wading through a load of previously unwatched Scandi crime series. Mainly this one which we are currently up to Season 4 of.

With Sofia Helin, Rafael Pettersson, Sarah Boberg, Dag Malmberg. When a body is found on the bridge between Denmark and Sweden, right on the border, Danish inspector Martin Rohde and Swedish Saga Norén have to share jurisdiction and work together to...

We’re really enjoying them.
Notice they never seem to shoot any of these series during the summer. Guess they don’t want it to look too cheerful.

I finished watching HAMMER HOUSE OF HORROR. Classic 80s anthology horror show. I have been trying to buy the follow up series for ages.

Just like you, Ali, I bought this wonderful series (Hammer House of Horror), on Bluray, several months ago, and have enjoyed a trip down memory lane with some of the best character actors of the time… 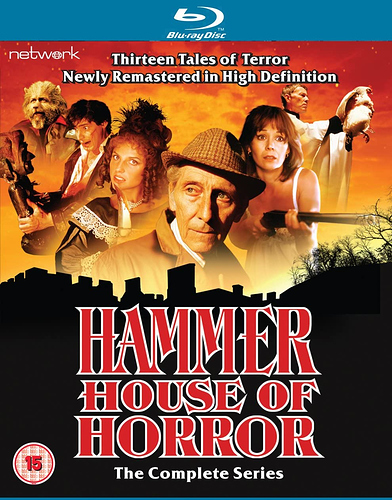 I hope that the follow up series HAMMER HOUSE OF MYSTERY AND SUSPENSE will be given the special blu ray treatment.
I love anthology series.