The Last Movie You Watched?

This thread is the same as The last Western you watched but for any movie. The last movie I watched was Cleopatra Jones.

Yes but that is for films you are watching tonight and films you have watched that night but if you haven’t seen it in the night you can post it here.

I knew you were going to say this

. I do not always go by the rules and post a film I have watched a couple a nights a go in the thread I quoted.Who is going to know… I could change my ways or go to hell and not tell the truth ;D .

This thread has the title the other should have. Despite the other is called “watching tonight”, the most entries are about actually seen films.

This thread has the title the other should have. Despite the other is called “watching tonight”, the most entries are about actually seen films.

Right.
We should post our impressions abourt films we actually saw here, and reserve the other thread for films we plan to watch. Since we’re big planners (most of my plans lead to naught), there should be enough to discuss in both threads.

Stanton is right. This is what the other thread should have been called but it does serve the same function. Most folk just post what they’ve seen on the other one already.

Stanton is right. This is what the other thread should have been called but it does serve the same function. Most folk just post what they’ve seen on the other one already.

Everybody’s right, nobody’s wrong, so what’ll we do ?

Everybody’s right, nobody’s wrong, so what’ll we do ?

I suggest we post the films we plan to watch in the what film are you watching tonight thread and the movies we have seen recently in this thread.

Interesting in that I felt it ignored many Hollywood structural patterns. Good movie but not my type.

“Wind Chill” two college students on their way home for christmas are involved in a crash and get stranded in snowy conditions and are menaced by the ghosts of people who have died on the road eithier in car crashes or murdered. This is a slow moving film, most of it set inside a car, talky mostly boring with a couple of eerie moments but not enough.

I really enjoyed this one. It has a great cast with some of my favorite actors. Specifically Burt Lancaster. I read his biography without knowing who he was but after seeing many of his great performances, I saw that he could make movies good alone. This was the first pairing of Kirk Douglas and Burt Lancaster. One of Hollywood’s most famous acting duos.

It also has an interesting tie to the Spaghetti Westerns birth. A small supporting role s given to Mickey Knox who had a hand in the dubbing of many great Spaghettis.

" Balls Of Fury" better than i thought it would be. fairly amusing.

Torso
Great Giallo with great directing. I still don’t get why Suzy Kendall is in the lead as her carachter is not so important for the film. In fact, the key carachter is Daniela.

Fair to good British shocker, in the mould of several recent horror movies set in the Australian Outback (director Watkins wrote one of these: GONE). A Middle Class couple leave London for a trip in the countryside, and are soon bullied by a group of Working Class hooligans (their leader looks like ManU player Rooney).

A bit slow (and not really atmospheric) at first, too many red herrings, and an overall lack of subtlety, but once first time director Watkins has his story on track, you’re in for a rough ride through hell

Seems like Watkins wants to make a point about British class society, and (the lack of) education working class youngsters get (at home). Would be interesting to hear what the Brits among us make of this movie (and Watkins message).

Edit: the director probably wanted to emphasize the opposition between the South and North of England too. The couple is from London, the hooligans from the North.

Woodstock - in truth, I watched much of it on fast forward, stopping whenever the film-makers interviewed anybody particularly outrageous, or when I liked the featured artist.

Even skipping though it like this was enough to appreciate the skill of the editors and the innovative split-screen photography.

Arabesque-- Not as much charm, fun and wit here compared to Charade but nicely done with a scene boasting Sophia Loren in the shower nekkid…

“Dead Meat” an irish zombie movie made and filmed in Ireland, and not too bad on a low budget. Obviously heavily influenced by " Night Of The Living Dead" but has a couple of things i’ve not seen before,sleeping zombies and a zombie cow!it has a few light hearted moments but is by no means a comedy. watchable, give it a while to get used to the accents though. 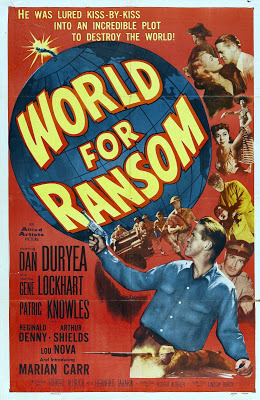 An annoyingly hard to find adventure Noir from Robert Aldrich who made the extremely stylish and ejoyable Kiss Me Deadly the next year. This film still holds the extremely extravagant stylization of an Aldrich Noir but is a little more clumsy. Its extrmely cheap and features some pretty laughable fights or hits. But these are none too apparent and the foggy "Singapore set with the candle lit street lights, hard light lit alley ways andsuch is very atmospheric. The film is a lot less leisurely than most Noirs and has the attitude of an action movie. Most action films leave camera art aside but despite the action possibilities, its not action and the expressionistic lighting is magnificent. Though some office building scenes are a little too well lit.

Dan Duryea plays a good enough role. He’s not a great actor but he’s pretty darn good in the films he’s in. He’s never really given a chance to do too many lead roles. I think he’s a good actor. Not great. but not too many actors can be called “great”

A fun movie. not too long, actually really short. And just say no to that poster!