The Last Film You Saw in the Cinema?

Rambo Last Blood - Imagine you are waiting for fourth Mad Max movie for about thirty years and then you would get two hour movie with something like 10-15 minutes of the good stuff in it (that would be car chases with hilarious stunts). Thankgod, that didn’t happen. But it somehow did with fifth Rambo. Fans can argue that they waited about twenty years for fourth Rambo already and got what they wanted, so the next waiting period (of about thirteen years) and its kind of unsatisfying result (at least for me) doesn’t hurt that much. Anyway, The Last Blood is not a bad movie, nor is it boring, it just left me a bit bewildered, if this is all Sly and his colleagues could distill from the idea of John vs Mexican cartels or whatever that was. 60% 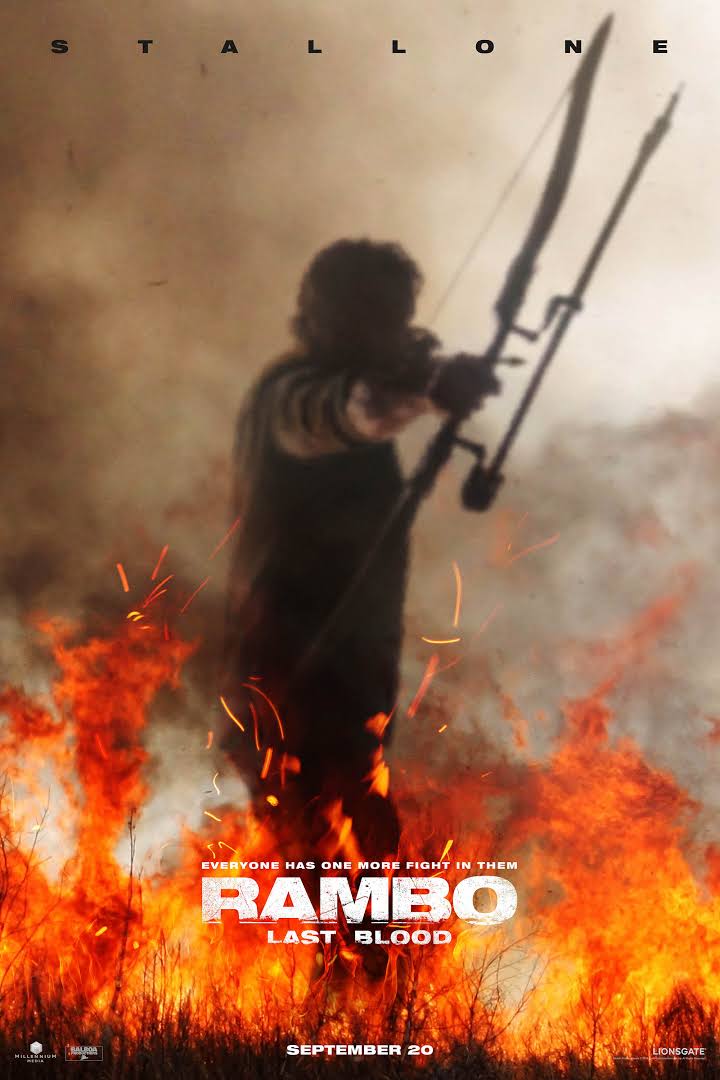 Fans can argue that they waited about twenty years for fourth Rambo already and got what they wanted, so the next waiting period (of about thirteen years) and its kind of unsatisfying result (at least for me) doesn’t hurt that much.

I would wait for that, and if he cut out few Creed movies, he can do one midtwenties.

When I left the cinema last Sunday night after seeing Tenet, I was overcome with the ardent desire to “invert” myself and not have wasted two and a half hours on this pretentious action nonsense. Christopher Nolan employs, without any apparent necessity, arbitrary references such as the Sator Square or the concept of entropy as pseudo-intellectual frosting on a tangled plot and an at first barely comprehensible but ultimately shallow story, accompanied or rather overwhelmed by Ludwig Göransson’s bombastic score, which can hardly be surpassed in kitsch and accidie-inducing repetitiveness and drowns out many a dialogue.

In a recent interview, Nolan cites C’era una volta il West as an influence on Tenet but explains this just as cryptically as his film conveys its story. “I have no idea whether this is true, but I sort of have this idea that if you look at Sergio Leone when he made Once Upon a Time in the West, there’s a slight feeling of … I’m not sure he watched any Westerns while he was making it.” Exactly. Tenet also leaves this impression, a slight feeling of … was it a car or a cat I saw?

He is drowning in his own obsessions. I’m not wasting my time with other peoples’ obsessions.

Now that I’ve read through his Wikipedia entry, I realize that apart from Tenet, I’ve only seen two of his other movies, Memento and Dunkirk. I found both of them good. Memento I saw a long, long time ago in the cinema, Dunkirk I watched recently on TV (in a German-dubbed version, which was really quite bizarre). In other words: I know almost nothing about Nolan’s obsessions, but I assume that questions of temporality and unconventional narrative structures are among them.

Interstellar is my favourite Nolan film.

Wow what an amazing movie. Later this week I will also catch The Keep, then I will graduate to 100% Mann on Letterboxd

Indiana Jones and the Kingdom of the Crystal Skulls back in the Summer of 2008, haven’t been back since as not too many recent films interest me. If they ever opened a theater that did reruns of Classic era films and/or 60’s-70’s genre stuff, I’d go back for sure.

Are you serious? I mean, and please don’t take that as an offense, you haven’t been to the movies for twelve years? I’m stunned.

As a cineast, I find that perplexing, too. But indeed, I also know a lot of people who haven’t been in a theater for quite a while. Sometimes this has to do with the place of residents. Unless you live in a big city with lots of niche, arthouse and repertory theaters, a shopping mall multiplex might be the only movie theater…

Unless you live in a big city with lots of niche, arthouse and repertory theaters, a shopping mall multiplex might be the only movie theater

This is true. In my suburban backwater of Pitsea there’s either the local Cineworld complex serving up hilariously overpriced tickets for current blockbusters, or… well, that’s it, really. There’s a smaller, far more reasonably priced cinema a short drive out to Canvey Island (and indeed that’s the one we frequent), but it’s still just the latest movies, and of course a smaller selection.

I have never been to a niche or arthouse cinema. Ever. I went to an outdoor screening of Django Unchained in Battersea once but getting home from there took hours; we had to miss the last half-hour of the movie just to get back home before 1am, and you really don’t want to be wandering around Pitsea after sundown. It’s like The Purge meets 30 Days of Night.

They do the worst ‘nachos’ and cheese dip ever. Odeon all the way.

The last film I saw was a surprise. I was taken to see YESTERDAY by wife. Prior to that it was THE FORCE AWAKENS before that THE NOVEMBER MAN in 2014 I think.
I estimate I go once a year…
I used to live in the art house cinema. Then the type of films shown started to change and I lost interest. Plus the club I was in was full of pretentious dickheads.

Sheffield after sundown is like I AM LEGEND meets ESCAPE FROM NEW YORK.

No offense taken my friend

. Health I have to admit played a role off and on there too, not anything serious, just one of those things. If they ever make those
Franco Nero new Westerns I would definitely go to the cinema.

Very true Admin, when I was growing up there was a theater about 20 minutes from where I lived, but it was on a street corner with no parking. They tried staying afloat for a while by showing all the classic films of the 30’s and 40’s, but it closed anyway.

I’m a homebody at heart anyway and like I can pause a Blu Ray here and there.

Watching movies at the theatre perks:

Not a tough call for me

They do the worst ‘nachos’ and cheese dip ever. Odeon all the way

I’ve never been in our Cineworld. Well, I have, but not since it became a Cineworld. I’d already long abandoned it back when it was an Empire. The nachos were good in there, but then they did away with the jalapeños and they were just shit after that.

I haven’t been to an Odeon in decades. Early/mid nineties, maybe?

I’m a homebody at heart anyway and like I can pause a Blu Ray here and there.

This is probably the right answer for me at the end of the day, although I’d love a little specialist cinema to open up here, for monster movie all-nighters and Shaw Brothers weekenders and spaghetti Sunday matinées. Maybe if I ever win the lottery I’ll open my own.