My thoughts on this film ;D

The Five Man Army are “The Dutchman” (Peter Graves) and four colleagues from previous escapades - Mesito (Bud Spencer), a big brute of a man that can knock out an opponent with a big thump to the top of the head (so, the usual Bud Spencer character then!); Samurai (Tetsuro Tamba), a ruthless sword bearing oriental; Captain Augustus (James Daly), an expert with dynamite; and Luis Dominguez (Nino Castelnuovo) an acrobat turned outlaw and the “baby” of the group.

The Dutchman has gathered the clan with the promise of a $1,000 reward if they can successfully carry out a robbery of a train (bearing gold to the value of Â£1 million) on behalf of the Mexican Revolution. The catch is that the train is heavily guarded by soldiers, with the military posted at regular intervals along the journey to resist any attempted theft.

This film is an Italian/American co-production, and it does bear traits of both nations particular western styles. It is at times highly entertaining, mostly pretty dumb but always very watchable. The highlight of the movie is the contrasting characters, who are all very likable (albeit fairly clichÃ©d). James Daly in particular has a good role as the ageing Captain Augustus, constantly doubting his (and his colleagues) ability to carry out the heist.

The actual robbery itself takes up nigh on half an hour of this movie, with very little dialogue. The scene is well filmed though and does not drag too badly at all. It also features a great scene where the bodies of the armed soldiers are waved about frantically as a signal to the nearby patrolling military that all is well.

Ennio Morricone’s score is rousing (of course), but does sound like a muddled jigsaw of many of his other works. It fits perfectly, however.

It may sound like I am being critical of this film, and I guess that there are a few shortcomings with it. But if you ignore its occasional predictability and just take it for what it is - a highly entertaining yet simple western - you are pretty much guaranteed to enjoy it from beginning to end. I know I did.

I love this film. It’s such a great experience. it’s coming this month on tv again over here, i will def. tape it 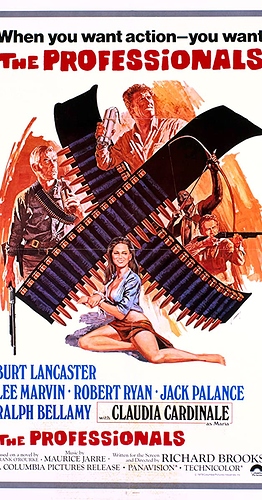 [quote=“cigar joe, post:3, topic:100”]One Question, how does it compare to “The Professionals”. Similar premise (group of experts)?[/quote]It’s been ages since I watched both movies but I’m quite sure about a couple of things: FIVE MAN ARMY has the better score while PROFESSIONALS has the better cast. Both films are absolutely worth watching, though.

I don’t particularly like this one, but the music by Morricone is excellent as always

Just recently watched the movie again. Unfortunately for me it was taped from the German television so it was dubbed in German.
I like the movie. It has a good cast and speed. No usual shootaout at the end. I would almost say “a feel good movie”.

I watched this film yesterday and I was not impressed. The first hour of the film is all about presenting the crew, its funny at times but nothing special.
The next 30 minutes is the cream of the film, those 30 minutes is one long train robbery scene. It has to be one of the longest train robbery scenes in film history, its pretty good and the only thing this film has going for it in my opinion.
The remaning 15 minutes is spent fighting over the stolen money that eventually ends up in the pockets of the revolutionary army.
Not a film to pay more than 5$ for in my opinion.

It’s strange to hear Bud Spencer’s real voice. I prefer his dubbed one.

I have the official C.D soundtrack for Five Man Army for sale if anyone is interested.
(Very reasonable price)

No jokes please. The Professionals is without any doubt by far the better film!
Richard Brooks is a good (not even the best) genre director, but with a genuine feeling for the western that only a few spaghetti directors could match. And let’s not try to compare the acting or the photography, there are worlds between.
And in this special case even the music by Maurice Jarre is better. It’s a more routine Morricone sountrack in my opinion, made with his left hand.

The Five Man Army is a very good SW. Way better than I expected. Good story line, good cast, good action, good flick. I totally enjoyed this one. 8 out of 10.

[quote=“stanton, post:11, topic:100”]No jokes please. The Professionals is without any doubt by far the better film!
Richard Brooks is a good (not even the best) genre director, but with a genuine feeling for the western that only a few spaghetti directors could match. And let’s not try to compare the acting or the photography, there are worlds between.
And in this special case even the music by Maurice Jarre is better. It’s a more routine Morricone sountrack in my opinion, made with his left hand.[/quote]

I agree with Stanton. No comparison. Lee Marvin and Burt Lancaster are both great in The Professionals. The Five Man Army has a “B” grade plot & screenplay, with pretty wooden acting (IMHO) by Peter Graves. I don’t care much for him in this movie and, jesus, RICHARD DALY, come on.
Everything about The Professionals says big budget and looks great. Plus it has Robert Ryan, Woody Strode, Claudia Cardinale AND Jack Palance. No comparison. Did I say no comparison? Let me say it again: no comparison.
I guess I don’t need to say that The Professionals is on my short list of favorite American westerns and The Five Man Army is, well, not on list of favorite Spaghettis.

I would like to check this out because this is the last SW that Dario Argento has scripted that i have not yet seen.

I thought this was more entertaining than the usual men on a suicide mission movie, I was expecting it to be similar to Today We Kill Tomorrow We Die… but my assumptions were wrong, a great surprise. And it is Bud Spencers real voice? I was thinking that through the whole film.

I always think of Airplane! when I see Peter Graves on screen.

I always think of Airplane! when I see Peter Graves on screen.

I think he was the one from ‘What’s your vector, Victor?’ wasn’t he?

He sure is the one from Have you ever seen a grown man naked?:

Good fun for the entire family !

I saw this one (on topic) and thought it waas pretty cool. Does anyone have any hard evidence about who was the actual director. I heard it was Don Taylor or something. And Zingareli only directed some of it.

Good fun for the entire family !