The correct rifles used in the American Civil War

One of the things that annoys most in some Sw and not only those more cheap productions, is the lack of historical authenticity, this mostly happens in SW related with the American Civil war, those type of incorrectness was more common those times, and really does not affect the quality (good or bad) of the film itself, but in any case this lack of historical rigueur can lead to some confusions on the less considerate viewer.
One of the most common mistakes regarding American Civil War SW orientated films it’s the use of Winchester rifles by everyone, Union or Confederate.
The most common types of rifles in the Confederate army were the Enfield .557 and the musket Springfield .58 both of muzzle loading, the first one was originally made in England. The Union army also used the Springfield .58, needless to say that both armies suffered from lack of rifles at the beginning of the war.

Both armies also used the usual Colt and Remington revolvers well known from anyone, but the Confederates mostly due to lack of supply from the above mentioned brands, had their own imitations of the Colt (Leech & Rigdon and Griswald & Gunnison) and Remington (Spiller & Burr) revolvers made in their Arsenals with almost similar quality (are quite collectibles revolvers now, like also the Le Mat and other brands that only existed in that period of time).
Some special sharpshooters units, and the cavalry from the Union Army were equipped with the Sharp rifle,

those were of breech-loading and were indeed a major improvement over the musket and not needing percussion caps, were of ideal use for the cavalry, the South also use some imitations from this gun. Another major improvement was the generalized use of the Minié conic projectile instead of the traditional spherical one, no need to say that the Minié projectile (not bullet) made a bigger hole.
From 1963 on, some Union units started to use the newest Spencer carbine of 7 repetition shots, that was loaded by introducing a tubular magazin with seven munitions on the stock of the gun. With an extra magazine on it could shot 15 rounds in one minute, but wasn’t a very reliable gun, the magazines were easily bend on transport, making the rifle propitious to jamming a lot, and it was also heavy and the munitions are even heavier to carry around (those days the soldiers had to walk most of the time no trucks back then not even in SW), but gave the Union armies greater fire power at closer range fights, and were also perfect to use by the cavalry units and in statics defensive positions (trenches), the Confederate side captured a lot of this guns, but were unable to use it cause they could not produced the metallic magazin that load them.

spencerrifle.jpg945×209 8.34 KB
The Spencer rifle the first repetitive rifle of the Civil War, that precede the Winchester rifle

So the Winchester was only first produced at the end of the civil war (1866 the famous yellow boy, cause of its brass receiver), and in significant numbers starting from 1870 on, so actually the gun never took part in the Civil War, it was a quality gun (the later versions) but a very expensive one, maybe that’s why it was never use (at least that I know of) by other armies than the US, and even then only or mostly the Cavalry units. Another curiosity about the Winchester is that it was the gun used in the 1905 regicide in Portugal, the gun was specially ordered from the U.S. by the mentors of the regicide.

Guns in westerns have always fascinated me, but I know so little about them. Thanks for the history lesson!

I agree, a lot of American Civil War Westerns has more modern guns in them like Colt 45.

I think the most used handgun in The American Civil War was the Colt Navy Cal 36 (in fact I had to look at Shobary’s page to see the name, I’m a bit embarressed of that

and of course the Colt Dragoon.

And while I was anyway looking for the name of the first one, I looked at the machine guns section and noticed these should’ve been used too: 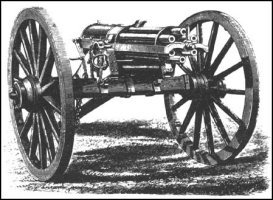 Yes the firsts Gatling guns saw their initial use by the Union Armies during the Civil War, it was a 58 caliber I think, and could shot a round of 300 bullets, didn’t make a great imapct on the war, cause mostly to it’s bad tactical use, (and late appearence) and also cause of some Union Generals thought it was a waste of bullets go figure.
The Confederate side also used some of those guns, mostly ones captured during an assault on an Important Union Arsenal (don’t remember the name do), and had their own version or the French machine gun, or most likely the French Metraileusee itself, which was the first machine gun ever made that I know of.

Also, canons where of course used.

Well Silence I’m afraid not being a great expert in Artillery except for the naval one (I was in the Navy so). I do know that the most used or common cannon during the civil war was the old 12 pounder Napoleon, like you can imagine it was not much different (in most cases it was identical) to the ones use by the French army in the Napoleonic wars 50 years before. Of course there were for sure new stuff, but most of the cannons and howitzers were still the old bronze made ones. Some improvments were made in the mortars with some big ones being made for some siege battles, but like I said not an expert.
Although of not decisive importance during the war some of the great novaltys were made in naval warfare, with some of the first all steel vessels being made, (but not the first ones, that was the French navy war vessel La Gloire used first time during the Crimea War), and the well known first-ever batlle between two steel vessels, the famous Hampton Roads (it was near the coast ;D) battle, between the USS Monitor and the Confederade CSS Virginia, it ended up in a tie by the way.

Well at least you know more than me ;).