The best of terence hill

My name is Nobody, people may complain about the comedy stuff in it but… 8)

I guess i’d go for “My Name Is Nobody” too. But then i’ve only seen that one and the two “Trinity” films. OH, and i vaguely remember seeing something called “Man From The East” (I think!) as a kid. I tend to associate Hill more with those non western comedies unfortunately. Btw…were all the westerns he starred in comedy ones?

god forgives,ace high,viva django and boot hill are not comedies,but boot hill may as well be

So by that, do you mean it has quite a few comedic scenes…or that it’s unintentionally funny?

SO, out of the non comedies, which would you recommend for viewing?

I voted for “My Name Is Nobody” it’s no.2 in my Top 20 SWs!!! Terrence Hill has been in so many great films though, he’s definitely up there with Tomas Milian and Franco Nero in the “Italian SW hero super league” IMO. I’d like to have seen all three together in a SW, with a big shootout at the end to decide who’s the best. I get the feeling Terrence Hill would be the quickest, Franco Nero would have a coffin with him and Tomas Milian would opt to use a knife.

I go with ‘God forgives … I don’t’, runners up ‘Viva Django’ and ‘Ace high’ !!! I prefer the serious ones but also like the comedies very much !!!

Nobody’s the greatest. I mean My name is Nobody. Followed by God Forgives and Viva django.

Little Rita Nel West is my favourite SW with T. Hill (in a small part)

What about Revenge of Trinity/ La Collera del vento ?

Not really a spaghetti western because it takes place in Spain, still it was made during the SW boom, and it’s listed in the database too.

I saw it some years ago, but I no longer have it in my collection. A very serious film, I think you can find some SW influences in it. Unfortunately I don’t remember everything about it.

Anybody seen it recently?

Some years ago I saw a a cut version of this film in italian and i liked it a lot. It’s not a western, like you said and TH plays a hitman hired by a land baron to kill a peon, if i can recall well.
Terence it’s great in this serious role…

The cool thing about Terence Hill is he can be great in a serious role as well as a comedy. As far as I’m concerned, he’s the 2nd best lead in SW history right behind Clint Eastwood. He’s super in Viva Django. 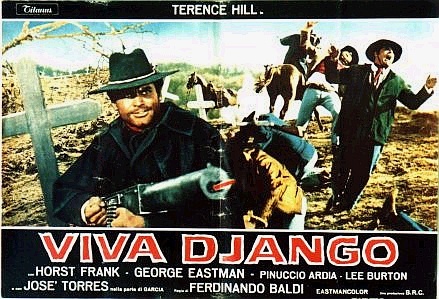 With Hill it is hard to compare his more serious Spaghettis with his comedies.

Serious Spaghs: God Forgives…I Don’t gets my vote. Brutal and mean with a great performance by Frank Wolff. This is one of my all time favs.

Comedy Spaghs: They Call Me Trinity. Laugh out loud funny. One of the few comedy spaghettis that I like

La collera del vento isn’t bad either (and not on the list) : it’s the film Antonio R. was talking about.

The Trinities are OK, “Boot Hill” defenitely is a comedy, the problem is that it isn’t funny …

What is funny tho’, is that in the sixties Hill was cast if Nero wasn’t available, because he looked a little like him (see “Preparati la bara”, for instance) and that a decade later things went the other way round: Nero, as a Hill lookalike, was cast when Terence wasn’t available.

My name is nobody is the one for me … Saw it the first time when I was in my early teens I guess and definitely one of the first spaghettis I ever saw, probably around the same time I saw the Leone-westerns and Django. Some may not be able to take the comic element but hey this is a classic spaghetti western if ever there was one. Gorgeous soundtrack too. Not to be missed.

God forgives… I don’t would be my runner-up. Really didn’t like it the first time I saw it but a second viewing of a better/more complete version definitely opened my eyes. A nice tough/rough western with Spencer/Hill not yet doing their comedy routine but still pulling off a couple of funny situations / lines.

Both highly recommended of course.

God forgives… I don’t would be my runner-up. Really didn’t like it the first time I saw it but a second viewing of a better/more complete version definitely opened my eyes. A nice tough/rough western with Spencer/Hill not yet doing their comedy routine but still pulling off a couple of funny situations / lines.

Very true about the funny lines. As anybody who has seen this knows, it is not a comedy but it has lots of dark, black humour.
I remember one scene where Frank Wolff comes into a cantina to meet Hill. One of them says someting like “It’s kind of crowded in here”. At that point they both pull their six-guns and each shoot two other people. “That’s better” one of them says.
Good stuff.