Oooh - that does look like a better pic than my version - this could well be worth a revisit if I can get a trade for the fandub - if anybody’s up for one?

The Anthony Ghidra double Feature from Wild east dropped in today so I just watched ”Tequila Joe”.
And I must say that I agree with what The stranger wrote below, the film is average at best.
IMO it has a kind of Demofilo Fidani feel attached to it.

Demofilo Fidani, really? I actually felt kind of surprise by it’s quality. Very enjoyable action flick. Despite a less focused role, Anthony Ghidra is excellent in this one.

I thought it was really well made except for the scene where they had stand in for Dick Palmer for his character’s death scene. I think he wasn’t available for shooting on that day or something.

Just rewatched this via Wild East’s double disc. It’s one of their best-looking transfers.

It’s a mixed bag, for sure. The plot is arcane, and could have furnished any contemporary US Western. Nor does director Dell’Aquila do much to liven it up; it’s left to Ghidra and, to a lesser extent, Sobieski to inject some momentum. I thought Ghidra did well - the role of drunkard has a lot of temptations for an actor, and for the most part Ghidra resists them. He runs through a range of emotions; so many, in fact, that he almost runs out of time before helping Sobieski in the final shootout.

Palmara and Meniconi were OK as the villains, though Palmara does most of his acting through his cigar.

The sets were good, the action adequate, but Dell’Aquila slips up with a number of nonsequiturs - the death of the Mexican girl is unexplained, and what happens to Meniconi’s daughter? Maybe my attention was drifting.

I have read this compared with Massacre Time - it shares the same writers, the same notion of a drunkard’s redemption. But there’s a vast gulf in class. This is an acceptable, moderately enjoyable film, but MT is far superior. 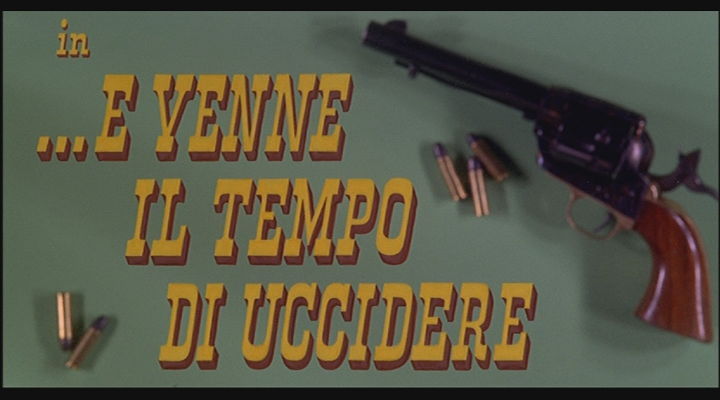 Late last night it was shown on TV. Very late last night, so my attention wasn’t at 100%, which is pity because from what I saw it gave me impression of a surprisingly solid b-class SW, with confident and dynamic directing, pleasant score and most notably, good acting. It’s only second SW I saw Anthony Ghidra in, and now I see why he’s so respected here. It’s very rare to see that kind of exceptional performance in SW.

Just watched the WE disc of this and I thought it was pretty disappointing. It suffered from poor writing and a dull leading man in Sobesiki. It also ended too soon, I felt like there should have been a bigger action scene after the small showdown at the end. Like Anthony Ghidra just got going and then suddenly its over, meh. I agree with the one who said it had a bit of Fidani feeling to it, paced like drying paint. Not terrible, but mediocre. The good parts are still pretty good. 5/10

Found it hard to sit through on the 2nd viewing… its pretty ridiculous that gang shooting all those innocent people including a baby, and all they get is a warning… takes forever for them to do anything about it… the complete opposite of all other Ghidra roles, he usually really convinces me in fistfights and as a gunfighter, but don’t want to see him like this.

The venerable @scherpschutter has a new review up

The just as venerable @davidgregorybell has wrote up a tremendous piece on the movie, for your reading enjoyment

Tequila Joe/Time And Place For Killing came along with A Hole In The Forehead/A Hole Between The Eyes (solid 6/10) on the Wild East DVD and I found it pretty OK (weaker of my 6/10 rated) after the first view. I liked the style, mood but especially the varied music by Francesco De Masi except for some non-SW incidental suspense music.
Dragomir Bojanic-Gidra played his alcoholic character very well but that theme maybe was to emphasized. I just waited for a scene when he cracked the bottle which came rather late and he was fit for fight…