Welcome to the December 2021 and January 2022 combined newsletter from in and around the Spaghetti Western Database, your regular newsletter of what happened last month. This edition is a New Year’s special including giveaway.

All forum members receive this

NEW STUFF IN AND AROUND THE SWDB IN

New around the SWDb:
We can still use everyone’s help fixing mistakes in the database, adding posters and lobby cards, fixing missing alternative titles and adding synposis, etc. One of the biggest little projects we began has to do with the lusophone community, i.e. Portuguese-speakers. We have started reaching out to our friends in Brazil and Portugal

to fix remaining gaps in the SWDb: alternate film titles that we are still missing, fixing those we have, adding pictures and VHS info and more. You can see some results of that work here: Portuguese Titles - The Spaghetti Western Database and please get in touch if you can help. The same goes for all other languages, and it also goes for local lobby cards, obscure posters, magazine covers, etc. Please get in touch!

New and upcoming discs:
December and January have been a bit quieter as labels don’t usually announce a lot of new stuff over the holidays and most things get released early enough for people to do their pre-Christmas shopping. Nevertheless there were a number of additions. We already moved all the 2021 releases into an archive page which you can check out. And we started adding 2022 releases as they trickle in, there are some exciting things on the horizon.
The stand-out December releases were an all-around happy release of Boot Hill for German customers especially, even though the serious cover motive was a Koch shop exclusive. Also two Explosive Media re-releases arrived, then there were to smaller label releases and a GBU release in Spain that was also just a re-release. 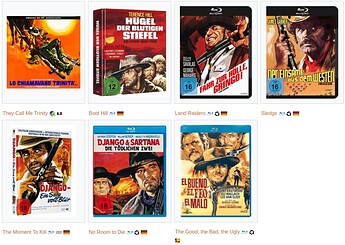 december1078×767 124 KB
The stand-out January releases were the first ever release of Django in Brazil, the release of Minnesota Clay by Explosive Media and another slate of Leone re-releases in Italy including The Good, The Bad and The Ugly in 4K UltraHD. And you can now get a second shot at the Vengeance Trails box set which has also been re-released. A book reissue that was well received was also part of this month’s good news. 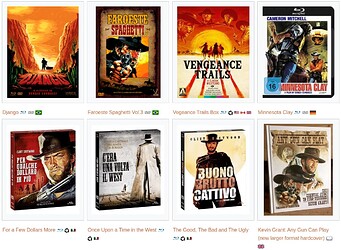 God’s Gun, not the greatest LvC film, is arriviing on BluRay in February.

Boot Hill Cemetery.
Continuing on a sadder note, our head of obits, @Tom_B (who’s doing great after a short stint at the hospital, cheers to you amigo) had to update the boot hill cemetery with at least 9 new obituaries over the course of the last eight weeks. Rest in peace.

Check out “Cemetery with crosses”

Reviews.
Here are some reviews from December and January

Books.
Just like music, book releases will also show up in our home video calendar, so do check that.

Music.
The December and January releases also included some soundtracks. The SWDb is still not the greatest source for spaghetti western soundtrack info so please help us add soundtrack releases from the last few decades to the database.

We added this collection to the database, let us know below if you have it and what you think of it: Ennio Morricone, Original soundtracks 1964-2015

Lastly, another technical upgrade to our forums went smoothly, and as you can explore here and here, there are plenty of new features and improvements made to the software that we use here to make your experience in the SWDb community even better. This of course doesn’t come free, so those of you who feel inclined to donate a dollar or euro or two, head here.

Many thanks to all and everyone who contributed this month, in the SWDb proper, here in the forums, everyone who has emailed us, shared our posts on social media, listened in on the podcast or donated a few bucks our way. See you next month with a roundup of updates. We wish you the happiest new year and hope you check in regularly, discuss, spread the word and contribute (click here to read about the many ways how to do that).

Among everyone proving comments below this issue of the newsletter we are giving a way a brand new, still sealed, copy of this ultra rare release by the former Dorado Films label… THE SEVEN FROM TEXAS. Deadline is February 20th. 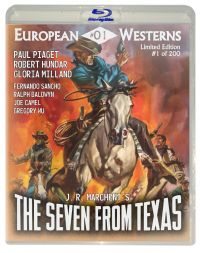 I’m glad I recently joined the SWDb community! Already bought some of the new blu ray releases I found on the calender. Great newsletter! And I like to have a chance to win the givaway blu ray!

Hey all. Although I’m new to the forum, I’ve been using this great SWDB for a few months now, since I started my SW journey around Oct. What started out as “watching a couple of spaghetti westerns” has become an obsession, in such a small space of time.
Now, I’m trying to watch as many as I can and learn about this fantastic genre (I’ve been buying a lot of Blu-rays and DVDs).

So a massive thank you to everyone involved in the SWDB!

Ahhh I remember when I discovered the genre around 2010 and searching for all different movies. Fond memories, a little envious of people just starting the journey! Good for you!!!

I’m so glad that the website continues to run so efficiently. It really helps me find new movies and contextualize them. I’ve been craving watching another western recently, so it might be time to finally approach my very long list of Spaghetti Westerns I want to watch!

What started out as “watching a couple of spaghetti westerns” has become an obsession, in such a small space of time.

Been there too some 20 years ago. I was just looking for some few good titles outside of Leone but things got out of hands pretty soon.

What started out as “watching a couple of spaghetti westerns” has become an obsession, in such a small space of time.

Been there too some 20 years ago. I was just looking for some few good titles outside of Leone but things got out of hands pretty soon.

Exact same for me aha. I had watched the dollars trilogy when I was younger but never really knew there was such an expansive sub-genre behind them. I bought the blu-ray for Day of Anger as one of my first boutique blu-ray purchases and from then on I went out of my way to find as many SWs as I could

Had a lot of fun in participating in Spagvember this year . . . took advantage of the snow storm in the northern US and watched “They Call Him Cemetery” this morning. Garko, Berger, and Nicolai’s music make for a helluva good movie! Thanks for all you do with this site!

I am off to Gran Canaria in a couple of weeks. Anybody know what films were made there and whether Sioux City is worth a visit?

I’ve been on a Spaghetti Western & poliziotteschi kick in 2021 and to my complete surprise I found myself much more enamoured with SW than poliziotteschi! In particular Duccio Tessari & Lucio Fulci’s offerings are really standouts. I was also really entertained by Castellari’s Kill Them All & Come Back Alone. Does anyone have recommendations for other similar exaggerated acrobatic SW’s?

Thanks for all of the latest updates. I grew up watching westerns in general including the occasional spaghetti western but I have learned a lot more since I started lurking around spaghetti-western.net . I still have a few questions that occasionally come to mind so maybe I can finally get some answers now that I have joined your forum.

Great website always my reference point. Not on here as often as I would like due to personal commitments. I will try harder to drop in every week at least twice. That’s a good resolution!

And the winner of the raffle is @Meceita please send me a personal message with your adress.

To the others, better luck next time and thanks for participating!

Wow, I’m really happy that I won the blu ray!!
Very special to have this. Thank you SWDb!!