I watched the Richard Lester Three Musketeers & Four Musketeers movies last night for the first time in many years. I used to love these films as a teenager, as well as the Alexandre Dumas novel, which I think they’re the best adaptation of by a long chalk. The cast is superb (Michael York, Oliver Reed, Christopher Lee, Charlton Heston, among others) and the fights & stunts are great & really haven’t aged at all.

I also recently watched The Princess Bride, another classic I haven’t seen for a long time. I guess these have put me the mood for more good colourful swashbucking movies.

I do love the Pirates of the Caribbean movies too, despite the ropey dialogue & other flaws. + I got to be an extra in the fourth POTC flick when they were filming in London a couple of months ago. 8)

Anyone else got any favourite swashbuckler films?

Nate And Hayes (released in the UK as The savage Islands) with Tommy Lee Jones. My personal favourite swashbuckler. Also, The Crimson Pirate.

Oh yeah, I’d forgotten The Crimson Pirate but absolutely loved it as a kid. Need to watch that again for sure.

Nate And Hayes (released in the UK as The savage Islands) with Tommy Lee Jones. My personal favourite swashbuckler.

Though the one film I haven’t seen yet is Swashbuckler; with Robert Shaw.

It probably means different things to different people, but to me a ‘swashbuckler’ has to include swordfighting, acrobatics, some sort of over-arching conflict, and period-settings no later than 1899. I used-to include period samurai-films, but that segment has basically become its own genre.

Personally, the signature swashbuckling-swordfight should include witty one-liners and impromptu athletic-stunts.
Faves:

The Prisoner Of Zenda… with Stewart Granger
The Prisoner Of Zenda… with Ronald Colman
The Sea Hawk
The Crimson Pirate
Scaramouche
The Three Musketeers & The Four Musketeers duo
Sinbad The Sailor… with Doug Fairbanks, Jr.
Master & Commander
The Princess Bride
Against All Flags
The Black Swan
Captain Horatio Hornblower
The Master Of Ballantrae
Zorro… with Tony Banderas
Sword Of Damascus
The Adventures Of Don Juan
The Scarlet Pimpernel
The Buccaneer… with Yul Brenner
The Buccaneer… with Fred March
Captain Blood

I’m a big fan of the Lester Musketeers films too. I even like the sequel based on Dumas’ Twenty Years After.

My favorite swashbuckler isn’t a film, but the Zorro comic as drawn by Alex Toth based on the Disney TV show:

Funnily enough, I bought The Mark of Zorro today. Looking forward to watching it.

The Disney-produced Zorro was great.

What happens with television-swashbucklers though, is that they quickly become formularized due to lack of a ‘villain of the week’. That’s why westerns succeeded for longer durations than Zorro, or The Adventures Of Robin Hood. The Sheriff Of Nottingham was the villain every week… who usually employed a ‘stooge of the week’.

Pirates Of Tortuga, 1961… It’s cheaply slapped-together with stock-footage, but the film has aged remarkably well. Any pirate-crew that features a cantankerous Scottish bagpiper is great. Ken Scott is charged, thru the King’s emissary, to liquidate the forces of Captain Henry Morgan on the isle of Tortuga. So he enlists some friends who happen to be experts with swords and cannon… and they all fall in-love with a zesty gypsy stowaway; Letitia Roman on the voyage over. Overall, the action is relatively limited, but having crewmembers dress as women to lure one of Morgan’s ships within seizing-distance, is novel. Scott is formidable as Captain Bart, though his swordfight with Robert Stephens’ Morgan is interrupted by an explosion… and they wake-up in a jail-cell together. The musical-score by Sawtell & Shefter, and the chemistry with Roman and whoever-she’s-onscreen-with makes me rate the film as rewardingly above-average. 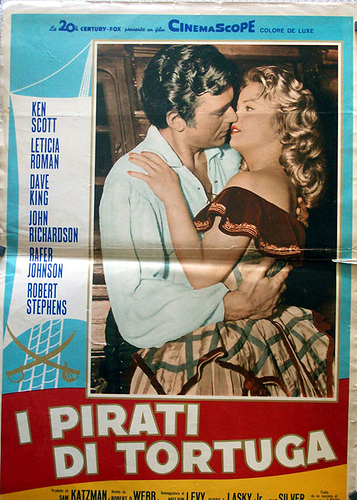