Maybe a Fernando Sancho season ? … He must have done 30, at least ?

For me there is a competing event going on in London between 9 and 28 November: The World Chess Championship 2018. Completed 30 films in November 2016 and 2017, but never one film a day for 30 days. Guess I have to consider …

This year I’m going only with movies that contain “Django”, “Sartana”, “Sabata”, “Ringo” or “Trinity” in the title. For a long time, I was going to go purely with movies that I own on those cheapo box sets but which, after all these years, I still haven’t seen yet. Incredibly, I’ve still got more than thirty movies sitting on my shelves that would fit that bill. I was even going to honour Mill Creek’s inclusion of The Manhunt on their 44-film set by selecting an Italian non-spag on one of the days (I actually purchased Demons, a movie I’d somehow never seen, for this purpose). I was also going to honour Golden Star’s inclusion on their Westerns Unchained set of a movie (Execution) without any English audio or subs by watching at least one of the movies in exactly that manner. Ultimately though, I flinched at the thought of that much low quality throughout the month and figured that, at least with my Django/Sartana/etc. idea, I could still guarantee myself a number of decent pics.

Next year I might just run with @Phil_H’s “Hit the ‘Random’ Button” idea. Or I might return to my 2015 “Favourite 30” theme. That’s a fantastic theme; guarantees excellent pictures which get better every day. Or, if I’ve suitably psyched myself up, I might still attempt my “Cheapo Box Set” idea. Maybe.

So my only decision so far is that the first half of this year’s Spagvemberfest will be a PLL retrospective featuring all his starring or co-starring roles. I’m not going to bother with his cameo in FAFDM. After that it may just turn into a random “off the to watch list” mix or a re-visit to some of the “also rans” that haven’t been watched by me for some years but which I vaguely remember as being ok. We’ll see.

But as of tomorrow it’s all about PLL.

– I have decided that this year’s SpagvemberFest will be devoted to Spanish Westerns, in particular to the films of Joaquín Luis Romero Marchent (1921–2012) and Rafael Romero Marchent (born in 1926). 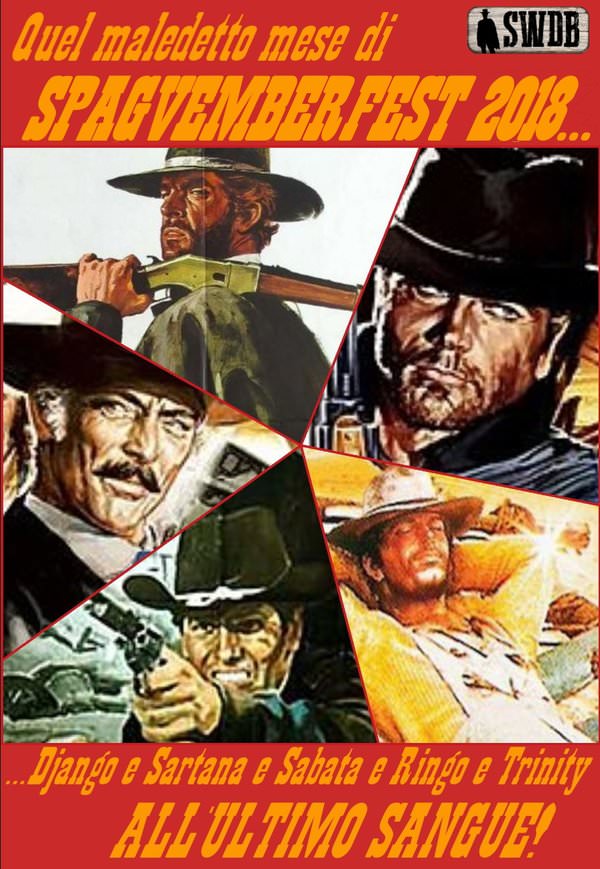 SpagvemberFest! Truly, the internet’s most utterly demented month-long movie challenge. For me this year, it’ll be a Django/Sartana/Sabata/Ringo/Trinity blowout; part brilliance, part crapulence, all spagulance (?).

DAY 1
Well, I’m off and running and I’ve kicked off with a strong start: the delightfully crackpot Django, Kill! If You Live, Shoot (Questi, 1967), a movie which I believe I’ve engineered into every SpagvemberFest so far. And quite right too. Now, sing along: “You won’t get away with this Oooooooooaaakes!” 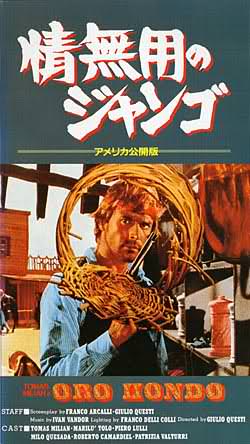 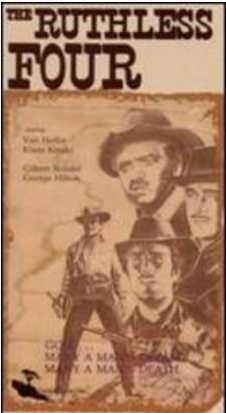 104 min version, mostly English dub, some scenes with German dub. One I’ve seen once before, did’nt remember anything from it.

My theme for this SpagvemberFest: 1968 releases.

Started off day one with Sartana’s Here, Trade Your Pistol for a Coffin, watched it while battling a bad cold. 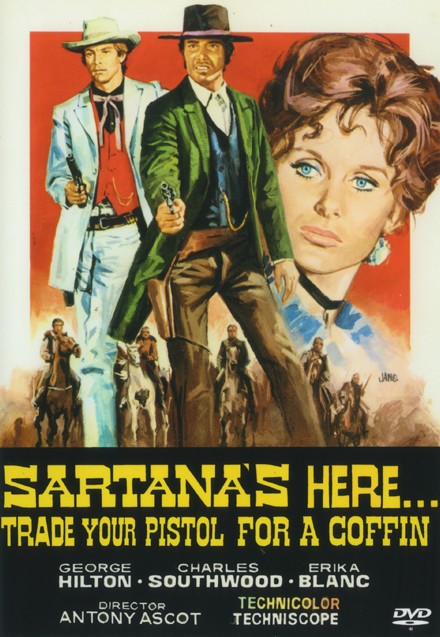 Started off day one with Sartana’s Here, Trade Your Pistol for a Coffin

This one’s on my list for much later in the month.

Spagvember#1. Lenzi: A Pistol for Hundred Coffins
-I thought I had not seen this for a very long time but apparently I watched it just 3 years ago. Film that is often said to have some good ideas that are undeveloped, PLL’s character is jehovah witness but that doesn’t really matter in the film except that he doesn’t drink alcohol. There could have been at least a training sequence, he just changes to sharpshooter while in previous scene he didn’t know how to use a gun. Then there’s the insane asylum patients (more like batshit crazy dimwits) which is nice idea bit just a unnecessary sideplot. There’s a nice supporting cast of sw regulars, Piero Lulli, Eduardo Fajardo, Raf Baldassarre, Victor Israel etc.

DAY 2
Today, I’m getting me some Sabata (Parolini, 1969), the bounciest, most acrobatic of westerns. If the Cirque du Soleil made spags, this is the spag they’d make. Watching all those extras flip, flop, tumble and twist as they get shot almost makes me want to go on a kill-crazy rampage. Carnage never looked such fun!

Looking at my schedule for this Spagvember, I’ve become slightly concerned that I’ve front-loaded the month with all of the better quality titles, and the back end is going to become a mindbending test of endurance. Hmm. Try not to think about it. 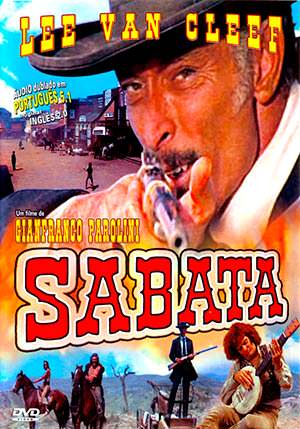 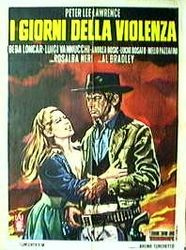 A standard revenge story with some nice touches, a great score and a whole bunch of regular welcome faces make this an enjoyable if not life changing ride. The opening shot of the boot on the stump with a knife thrown into it is a great start and all of the above make up for the essentially story by numbers approach to the rest of the film. And hey, we get Rosalba Neri (before she is polished off far too early as usual, Nello Pazzafini as the ultimately untrustworthy friend and Andrea Bosic as the embittered cripple father figure. Good enough for me.

PLL as the good boy who goes renegade in response to a family injustice becomes something of a trope for him as I recall. The type suits him well enough and overall a good start to this year’s Spagvemberfest for me. 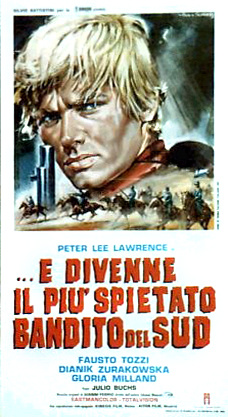 And indeed here is PLL again playing the good boy turned renegade character although whereas in Days of Violence everything turned out peachy and he lives happily ever after with the squeeze this time it all goes Pete Tong and winds up eating dust.

Despite the text at the beginning of the film assuring us this told as it really happened it’s safe to say that the story wavers somewhat from the truth while sticking reasonably to the coarse of events as the history books would have them. An enjoyable piece nonetheless and Dyanik Zurakowska looks good while ensuring PLL isn’t the blondest person on screen. Zurakowska was Belgian apparently. Assumed she was Polish.

Also benefits from an enjoyably twangy score from Gianni Ferrio.

spagvember #2 Garrone: No Graves on Boot Hill
-Ok film which is rather boring when it tries to be serious and entertaining when it goes on action mode. Includes one of the craziest sw tricks -shooting at the gunbelt thrown in the air. 5/10

Rafael Romero Marchent’s elder brother, Joaquín Luis, directed his first “real” Western, Tres hombres buenos, in the year 2 BL†, after having made two Zorro surrogates (El Coyote, La justicia del Coyote) and two Zorro non-surrogates (La venganza del Zorro, Cabalgando hacia la muerte [“riding towards death”]). But, as the saying goes, a coyote ain’t no fox, and a lemon ain’t no baby-orange: T. h. b. is as competently produced, directed and photographed as its American B-Western predecessors it succeeds in emulating to the last spur and rowel. Unfortunately, it’s also as predictable and tedious.

Started day 2 with another Sartana movie that I’ve been needing to rewatch, If You Meet Sartana… Pray For Your Death. 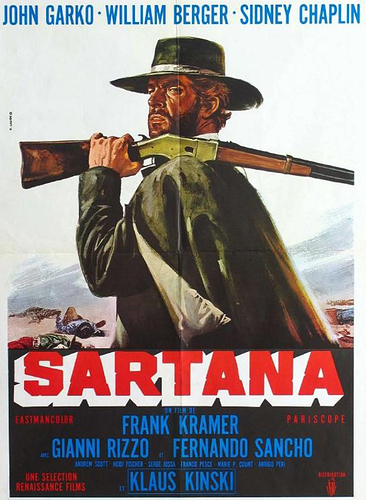 The Arrow Video remaster really helped with my opinion of the movie this time. I could actually bear to look at the screen this time lol. 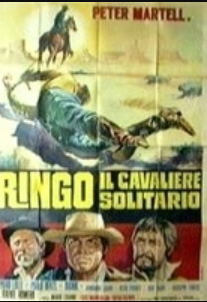 #3 Caiano: A Coffin for the Sheriff
-Here’s a one I hadn’t seen in a while. Solid Steffen film with Eduardo Fajardo looking weird with blond hair. Classic revenge western stuff without much originality apart from Steffen’s character who is called Shenandoah, where did they got that one? Nice music, good looking girl… ok film. The old geezer was just annoying and the last scene with him was just plain awful. 6/10