Spaghetti Westerns in other media (or other movies)/Influence of SWs

Sorry for the poorly constructed title to this topic,

Wanted to start a thread on the influence of Spaghetti Westerns.

Wanted this to become a place where we can document every time Spaghetti Westerns have featured in other media. This could be video games (I’ve heard Red Dead Revolver used a lot of SW music- can anyone discuss about that?), movies in other languages (I’ll discuss one right away), and Tarantino tributes!

Sholay (1975) is an action blockbuster from Bollywood. While, it does share certain similarities with Spaghetti westerns- like the protagonists aren’t exactly the good guys, a group of bandits (dacoits) led by Gabbar are haunting a village, and the general rugged terrain which gives you the sense of isolation. (though, they are keeping in tone with Indian sensibilities and morality of the time, so even though the heroes are thieves, they aren’t amoral and try to do the right thing)

The construction of Gabbar reminded me of Indio, in certain, ways, though he isn’t as perturbed as Indio through For a few dollars more. There is also a train being attacked by the dacoits at the beginning of the movie (if I remember well), which was quite oft seen in Zapata Westerns (though hardly a theme particular to SWs).

But, the most obvious reference is the massacre of Thakur’s family, which is quite similar to the McBain family massacre in Once Upon A Time In America

Can we get other such references and tributes?

The comic book seies of Durango are full of references to the Spaghetti westers.

The first volume has the atmophere of Te Big Gundown with the main bad guy looking like Klaus kinski. In a cemetery there is a tombstone with Silence written on it.

In the third volume there is a reference to the shop where Tuco buys his gun in GBU, but this time Durango buys the gun of Silence.

In the fourth volume we meet Amos, based upon Tomas Milian and a Mexican bounty hunter based upon Mario Brega.

The fifth and sixth volumes continue with Tomas Milian but also with Jack Palance. References to Companeros and The Mercenary.

Volume 7 we see Luigi Pistili as a banker, a bit like in TGS (again)

Volume 9 they have to search for a treasure. A message is written at the back of a picture of Bob Robertson (image and name of Leone)

From Volume 10 onwards the series gets slowly away from the Italian western. A Girl and Her Gun is a magnificent, stylistic marriage of British kitchen-sink urban drama to the Spaghetti Western, to which it is also a love letter.

@LooneyElmerFudd That sounds damn fun. Great to see that one comic book had references to so many classics. This seems like one of the best buys for a SW fan. (Always wished for something like this TBH, imagine a work where Cuchillo (The Big gundown) runs into Tuco)

@last.caress Read your beautiful review. Will check out the movie when I’m free from work. The plot does sound enticing. Will see how the SW music is used in this. 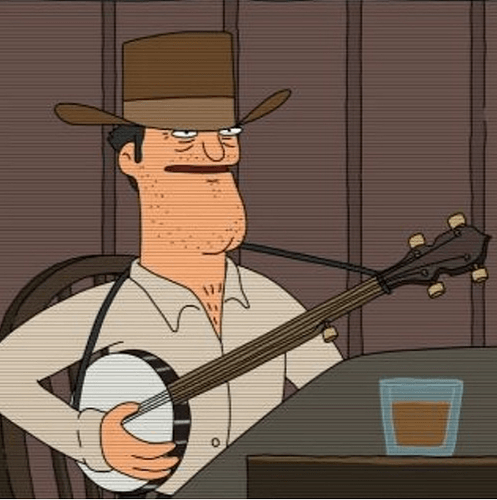 One of the best examples is the showdown in Kelly’s heroes:

Showdown with a tiger

With Eastwood and Savallas, both started in the Italian westerns. Notice the music as well, very much influenced by Morricone

Funnily enough, saw an episode of this Disney show called ‘Recess’ titled Dodgeball City today. One of the ‘meek’ characters, Gus Griswald, is portrayed as someone who was a champion dodgeballer in the past. He is dressed like the Man with No Name (with the hat and poncho), and the entire episode has a ‘western’ tone and look (though not specifically SWs).

This still remains a good commercial from the lat 80’s. Watched it often on tv as a kid. Talking about influence