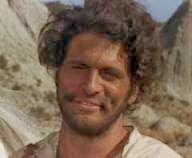 Italian American actor Tony Musante died November 26, 2013 at Lenox Hill Hospital in New York City due to complications following surgery. He was 77. Antonio Peter Musante, Jr. was born on June 30, 1936 in Bridgeport, Connecticut. He attended Oberlin College and Northwestern University. Musante acted in numerous feature films, in the United States and elsewhere, including Italy. Among his body of work are the television series ‘Toma’ (1973-1974) (predecessor to ‘Baretta’ with Robert Blake) and the soap opera ‘As The World Turns’, and the 1975 Broadway play, ‘P. S. Your Cat Is Dead!’, for which he was nominated for a Drama Desk Award. Musante also played Antonio “Nino” Schibetta, a feared Mafia boss and the Italian gang leader inside of Emerald City during the first season of the HBO critically acclaimed television series ‘Oz’. He’s known by Spaghetti western fans for his portrayal of Paco Roman alongside Franco Nero in the 1968 film “The Mercenary”.

Very sad. Musante was terrific in The Mercenary as well as Argento’s Bird With the Crystal Plumage; a classic Giallo.
It’s been a hell of a year for losing some of these guys.
R.I.P

RIP Tony Musante. I especially liked him in Crystal Plumage.

What the heck is going on? So many people has recently passed away. It feels very sad. R.I.P. Mr Musante

Interesting actor for sure. Liked him in The Last Run the best. R.I.P

RIP Tony Musante, who was really excellent in The Bird with the Crystal Plumage and equally so in The Mercenary.

RIP. I second anything said about him being great in The Mercenary and The Bird with The Crystal Plumage.

Liked him in The Mercenary and Goodbye e Amen.
R.I.P. Tony