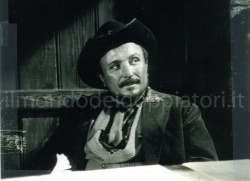 Italian actor, singer and voice actor Sergio Tedesco died on June 3, 2012 in Perugia, Italy after a long illness. He was 84. Tedesco was the father of actress Paola Tedesco and producer, screenwriter Maurizio Tedesco. He appeared in one Euro-western “Gun Shy Piluk” (1968) as the sheriff and was the Italian voice of Domingo Antoine (Colonel Gunther Ruiz) in “Duck You Sucker” (1969).