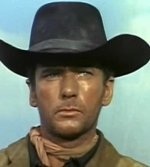 Actor Richard Wyler passed away from kidney failure in a Palm Springs, California hospital on Friday March 5, 2010. He was 86. Wyler appeared in such Spaghetti Westerns as “The Ugly Ones” with Tomas Milian, “Turn… I’ll Kill You” with Fernando Sancho, “The Rattler Kid” with Brad Harris and “Two Pistols for a Coward” with Anthony Steffen and Ken Wood.

RIP.
I never had a problem with you as a lead.

I really like him in The Bounty Killer/Ugly Ones - I’ve dug out Turn - I’ll Kill You for tonight’s viewing. RIP

I will give “The bounty killer” a spin tonight in memory of him.

RIP indeed. Liked him alot in Two Pistols for a Coward.

Turn - I’ll Kill You was not Wyler’s finest hour (and a half), altho’ he’s pretty good in it, as is Fernando. It’s the story itself that is dire - so not his fault. The Bounty Killer tomorrow then. That’s in my top 20.

I’m not a big fan, but it’s always sad when a SW actor passes away…