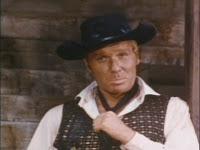 German-born actor Peter Carsten died in Lucija, Slovenia on Friday evening April 20, 2012, aged 83, his wife Lilijana Carsten Ramsenthaler has confirmed for the STA. In his long career he played in more than 100 applications from 1953-1999, but is known primarily for the role of the Nazi commander Kowalski from the German film trilogy 08/15, copied from the novel of the proposals by Hans Hellmut Kirste. Carsten appeared in three Euro-westerns “My Name is Pecos” (1967), “And God Said to Cain” (1969) and “Where the Bullets Fly” (1972).

Think I’ll watch And God spoke to Cain this week in his memory.

And God Said to Cain is one of my favorite SWs and he was a big reason why. Sorry to hear this. RIP.

Too many of these sorts of posts lately I’m afraid but I guess these fellas are all getting of that age in life.
Carsten was always good value and two out his 3 Spaghettis are of the upper ranks in my opinion. Pity about the third but hey, 2 out of 3 ain’t too shabby.

New the face, but not the name…R.I.P