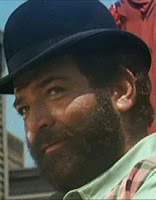 American actor Paul Smith passed away in Israel in April of 2012. Paul and his wife Eve had moved to Ra’anana, Israel in 2006. Paul appeared in numerous films and TV series and is probably best remembered as Bluto in “Popeye” (1980). To us western fans he’s best remembered as half of the Spencer/Hill clone team of Len and Coby in a series of Italian comedy films including the two Carambola westerns. Paul also played the Archduke in 1994’s feature film “Maverick” with Mel Gibson.

RIP, remember him best for his psychopath roles in Pieces and The Salamander. He wasn´t too bad as a Bud Spencer knockoff.

I also remember him from Pieces, I guess he had a long enough life though.