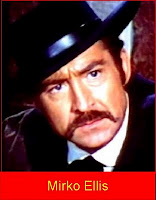 Swiss born actor Mirko Ellis who made a name for himself in Italian films, stage plays and TV died on September 11, 2014 at his home in Alghero, Sardinia, Italy. He was 91.His body was found in the courtroom of the parking garage of his condominium. He either fell or committed suicide by jumping from his 4th story home. Ellis appeared in fourteen Euro-westerns beginning with “Shatterhand” in 1963 as Joe Burker and was in such well-known titles as “Buffalo Bill, Hero of the Far West” as Yellowhand, “El Rojo” as Navarro “Long Live Your Death” as the Yuma Prison warden.

RIP. I always liked him. He had a good face for westerns. He looked like a cross between Don Ameche and John Hurt with a bit of Ian McKellan thrown in.

Jumping out of a building at the age of 91. I guess no one can accuse him of not performing his own stunts.