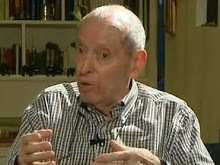 Stracult’s Marco Giusti posted on his Facebook page today that Italian producer, director, screenwriter Luciano Ercoli has died in Barcelona, Spain at the age of 84. Ercoli, born in Rome, Italy on October 19, 1929, produced the two Ringo films (1965) starring Giuliano Gemma. Among other films that he produced were the Euro-westerns “Long Days of Vengeance” (1967) again with Gemma and “The Ruthless Four” (1968) with Van Heflin, Gilbert Roland, George Hilton and Klaus Kinski. Ercoli was married to Spanish actress Nieves Navarro since 1972.

Very sad to hear.
But hey, married to Nieves Navarro? Life couldn’t have been too bad.

He also directed two of my favorite gialli, Death Walks at Midnight and Death Walks on High Heels. Both with Navarro.

RIP. Another legend lost. But his films will live on.