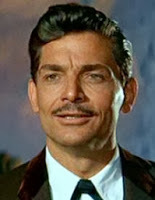 I just found out from Boyd Magers Western Clippings that actor Larry Pennell died this past August 28th. Although some of us remember him from the TV series ‘Ripcord’ he’ll probably be most remembered as “Dash Riprock” from the ‘Beverly Hillbillies’ TV series. Larry appeared in one Euro-western “Flaming Frontier” in1965 playing General Jack O’Neal. Larry was 85.