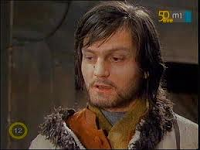 RIP Jozef Adamovič. Slovak stage director, teacher and actor Jozef Adamovič died August 2nd in Bratislava, Slovenia. He was 74. Although mainly involved with the theater he appeared in over 25 films and TV appearances including one Euro-western: “The Sons of Great Bear” (1966) an East German Indian film as Tschapa. He and his wife, actress Božidara Turzonovová founded the Academy of Arts in Banska.