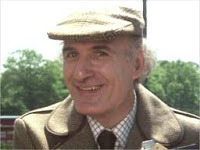 A charismatic actor who performed alongside some of the biggest names in showbiz has died. Joe Melia (Giuseppe Phillip William Melia), who grew up in St Matthew’s, Leicester, had a glittering theatre, television and film career, starring alongside the likes of Sid James, Morecambe and Wise and Kenneth Williams. The former City of Leicester Boys pupil died on October 20, after suffering heart problems. The son of Italian parents, Joe was born in Islington, but his family moved to Leicester during the war. Part of the esteemed Cambridge Footlights Review he was spotted by a talent scout and offered a part in the 1959 comedy film Too Many Crooks, alongside Sid James and George Cole. Joe appeared as Tortillaw in the Euro-western “A Talent for Loving” (1969).

Yeah, that’s very sad. I can’t remember a week without at least one demise of an actor.
RIP Mr Melia.