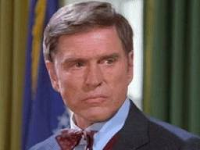 American actor G.D. Spradlin passed away in San Luis Obispo, California on July 24, 2011. He was 90 years-old. Spradlin didn’t start making films until he was in his 40s. He appeared in such westerns as “Will Penny” (1968) and “Monte Walsh” (1970) and one Euro-western “The Hunting Party” (1971) as Sam Bayard. A full obit can be viewed at Cemetery With Crosses.

Do you know what the G.D. stands for?

Gervais Duan according to here:

Correct. G.D. stands for Gervais Duan. He was a multi-millionaire oil man before becoming an actor when he was in his 40s.

Interesting deciding to become an actor then.

He played the General in Apocalypse Now, in that scene with Harrison Ford when they give the mission to Martin Sheen, very good scene by the way.