Sad to hear Tuco passed away, but at 98 he has lived a full lifetime…

Thank you for your great western roles ( and all others of course!) and RIP…

Eli Wallach, legendary American character actor best known for his supporting roles in the Western classics “The Magnificent Seven” and “The Good, The Bad, and The Ugly,” died Tuesday in New York City, at the age of 98.

Born Eli Herschel Wallach on December 7, 1915 in Brooklyn, New York. Wallach attended college at the University of Texas and earned a master’s degree in education at City College of New York. He served as an Army medic in World War II and made his debut on Broadway in 1945.

Wallach won a Tony Award in 1951 for his performance as Alvaro in Tennessee Williams’s “The Rose Tattoo,” and made his film debut five years later in the Elia Kazan-directed “Baby Doll.”

But his two most memorable roles were those of Mexican bandits. In 1960’s “The Magnificent Seven,” Wallach played Calvera, who regularly raids a Mexican village for food until its inhabitants are forced to turn to the eponymous characters for protection. In 1966, Wallach played Tuco opposite Clint Eastwood in “The Good, The Bad, and the Ugly.” Eli went on to appear in three more Euro-westerns: “Ace High” (1968) as Cacopoulos, “Long Live Your Death” (1971) as Max Lozoya and “The White, the Yellow and the Black” (1975) as Sheriff Edward ‘Black Jack’ Gideon)

The performance you gave in ”The good, the bad and the ugly” is the best by any actor in any spaghetti western.

I think that Claudia Cardinale and Clint Eastwood might now be the only Leone film characters who are still alive.

RIP to legend who lived a long and fulfilling life.

There aren’t many great ones left, that’s for certain. Eastwood, Duvall, Douglas…an era is fading into the sunset and the future of western film doesn’t look good at all.
RIP, Eli. Thanks for the memories.

I don’t usually do this internet RIP stuff, but yeah, so long Eli, počivaj u miru, your Tuco will live forever.

RIP Eli Wallach. It is always sad to hear that another great figure of the SWs has passed away (though in this case its not so sad considering his age).

Even though Clint is my favourite actor of all time Eli stole the show in GBU.

R.I.P. Eli. Even though Clint is my favourite actor of all time Eli stole the show in GBU.

I tend to think the same thing. IMHO Clint’s character in GBU was a bit dull and lacking in personality - even Angel Eyes seemed a better prospect if one was looking to make a new friend. Tuco had so many contrasting traits…he could alternate between loyal and treacherous, amiable and hostile, serious and humorous. He was a colorful character and a likeable bandit.

I couldn’t agree more with the wonderful comments being made about Eli.
As ‘Tuco’, in ‘The Good, the Bad and the Ugly’, he literally stole the show. At the drop of a cheroot, he could be vicious, conniving, deceitful, back-stabbing…a "son of a thousand…"
And yet, at the drop of a weathered sombrero, he could reveal the most heart-breaking pathos.
Never is this pathos more telling, than in the scene with the late, great, Luigi Pistilli (playing his brother, ‘Brother Pablo Ramirez’). This scene alone (combined with Ennio Morricone’s highly emotive and exquisite score), is worth the price of admission, and reveals Eli Wallach to be nothing less than monumental in his telling approach to portraying a memorable character on-screen.

With so many Italian Westerns being produced, it is easy to forget that a select few produced what can only be described as a ‘gem of a performance’.
Eli Wallach could - with ease and grace - produce not only a gem, but also a whole coffin full of wealth for all who cared to ride along.
If there was any wealth at all to be found in a truly brilliant ‘Spaghetti Western’, then it was not usually to be found in dollars or dust…it would be found in the performances of actors who -through no fault of their own - had often been ‘over-looked’ by their native country.

Thanks Eli. You have left many of us with performances that are now there at the push of a button. You will always be with us.

i heard this today…

Been away from here for a little while due to work load but had to comment here.

R.I.P Eli. A great innings for a great actor.

I just came to the forum after the long absence (lots of work) and that’s one of the first things I see. I was a little out of information nowadays, so I missed this until now. RIP! His Tuco has to be one of my top 3 performances ever.

That man was something else. He was so full of life and energy and brought something to every single role, even to Edward Gideon in ‘The White, the Yellow, the Black’.

My top 5 favourite performances from him are:

Has anyone read this book? 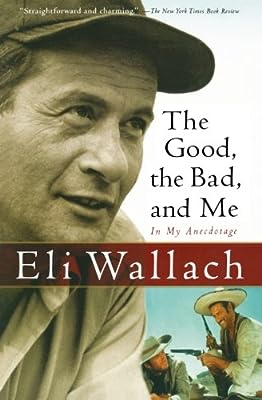 The sparkling memoir of a movie icon's life in the footlights and on camera, The Good, the Bad, and Me tells the extraordinary story of Eli Wallach's many years dedicated to his craft. Beginning with ...

Is that his autobiography? Yeah, it’s great. His birthplace was actually a couple of blocks from mine!

Another great role for him is The Line-Up from Don Siegel. Fantastic thriller with him as hired killer.

Yeah. I just watched The Lineup. The scene where he gets slapped by the man-in-the-wheelchair, then goes psycho, pushing the man off the balcony in front of all the schoolgirls, is so cutting-edged ahead of its time, I can’t even describe it.