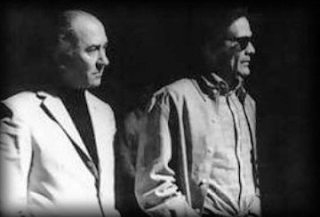 Producer, director, screenwriter and cinematographer Alvaro Mancori passed away on June 24, 2011. There were no obituaries in the Italian press. Alvaro was born in Rome on September 15, 1923 and was the brother of cinematographers Guglielmo Mancori [1927- ] and Sandro Mancori [1933-2009]. Alvaro was the cinematographer on over 50 films from 1940 until 1966. He started his career in the Golden Age of Italian Cinema in 1940 as a studio technician. In 1941 he became an assistant cameraman and in 1946 he was the lead cameraman on “Come scopersi l’America” by Carlo Borghesio. He became a regular on the Toto films and was the cinematographer on a dozen of the comedian’s films. In 1963 Alvaro created Elios studios where one of the major Italian western sets was built. He became a director in 1964 and directed both “Hercules the Invincible” and “Racconti a due piazze” (1965). Alvaro participated in four Euro westerns as a producer and cinematographer “The Magnificent Brutes of the West” (1964) and “The Tramplers” (1965) and producer on “Run, Man, Run” (1968) and “Bastard Go and Kill” (1971). For sure one of the instrumental players in the Euro-western.