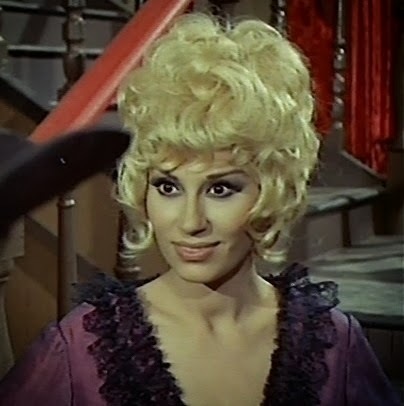 Actress and belly dancer Aiche Nana died at the Aurelia Hospital in Rome last night January 29th from complications of a disease from which she suffered for a long time. Turkish, although in biographies claim she was a native of Beirut, Lebanon would have turned 78 in February of this year. She was best known for the noise that was made, in 1958 during the time of dolce vita, when she did an impromptu striptease in a restaurant in Trastevere, Rugantino, attended by several Italian and foreign celebrities of the time. Nana appeared in three Euro-westerns: The Sheriff Won’t Shoot – 1965 (Desiree Vermont), Thompson 1880 – 1966 (Fanny), Gun Shy Piluk - 1968 (Daisy Sugar Candy).

That sure is a heck of hair! As Burt Reynolds asked in THE LONGEST YARD: “Ever find any spiders in it?”

Sorry to hear she’s passed away, though.

She was also in Chrysanthemums for a Bunch of Swine.