The Cantabrian actor Ricardo López Nuño died today, Wednesday the 11th from heart failure, following a month’s stay in hospital. Born to a well-to-do family, he was the son of a prison governor and he settled in Madrid during his student years, which is when he started studying acting and filmmaking. Thanks to his good presence, the tall, 285-pound actor was soon in demand in various supporting roles, particularly in westerns.
In the 1980’s Palacios found a second career as a writer-director, mainly for TV. Towards the end of the century, he retired due to health reasons. 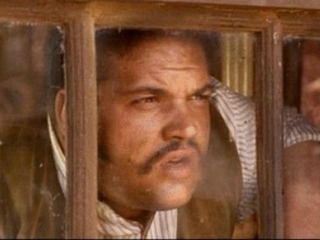 Ricardo Palacios was one of the faces many of us first learned the name of. He appeared as the bartender in For a Few Dollars More that visually tells Col. Mortimer where Guy Calloway might be. He went on to appear in 30 Euro-westerns playing Mexican bandits, soldiers, townsmen and bartenders. I met him in Madrid in 2003 when Aldo Sambrell introduced him to me while we were eating lunch. Ricardo was sitting alone at a small table reading a book. He was very nice and enjoyed being recognized and known by a Gringo. Although many of his roles were small he was always a welcome sight to see when he appeared on screen. He would have been 75 on March 2nd. Thanks for all the great adventures Ricardo and RIP. You will never be forgotten by the fans of the Spaghetti western genre.

In those 60s westerns, he was in still in his twenties. Like many actors his size, he was often required to play characters older than himself. Margheriti once told him: “Squint your eyes so that your radiant youth won’t show!”

Palacios, BTW, claims he had roles in GBU and ONCE UPON A TIME IN THE WEST, although they were not included in the final cuts of these films. in GBU, he had a barroom brawl with Wallach and in ONCE UPON A TIME, he was a railroad employee who exhcanged a few words with Claudia Cardinale.

Wow, I would have never believed he was so young in films like For a Few Dollars More.

Sad to hear of his passing.
Another of those familiar faces gone.

Another of those memorable, and always welcome, faces that always enhanced every Spaghetti Western he appeared in…

I’m sure you probably think about it too, Tom. Many of these passings are getting uncomfortably close to our own age

Thanks for the memories, Ricardo. R.I.P. amigo

Carlos, that’s always the thing about death as we get older. We are reminded every time someone passes of our own mortality. A bit of our own lives are taken away from us every time an actor, a friend a co-worker, neighbor, etc. passes. Life is life and we all have our own to lead but it’s amazing how many others touch us on a daily basis that we don’t realize until it jumps up and hits us, they aren’t here anymore. Yes we can see photos, films, listen to recordings but it’s never quite the same. All we have are memories of the past. Live life to the fullest everyday and be thankful you have one more to experience.