Just watched this one from the allways reliable Klimovsky on a rare swedish vhs tape with “swedish” title THE BANKROBBERS. The, really nice, credit-sequence is in spanish but the film itself dubbed English…
Must say i liked it a lot, slow-moving and rather untypical western in that almost all the time is spent inside a single waystation where a bunch of bankrobbers all suspect eachother for being the one that´s hiding the loot from the last job. The gang steadily gets decimated and there´s a few plottwists and a surprisingly romantic ending waiting.
I liked the pace and the soft colours in it, and allthough being used to the many plottwists in giallis i still quite didn´t figure it all out until the end. Nice use of flashbacks from the hold up where, just like in a giallo, more details get clear in every playback. In all a good one, solid cast and a fine themesong.

The first all-indoors spaghetti western! I loved the ending, a slow pan across the room strewn with bodies. The young lovers didn’t even get to walk off into the sunset or anything. The structure of the film is intriguing and I agree, it’s got a solid cast. Who or what was Quinto though?

Is this alike Mata-lo or God doesnt pay at saturday?

Who or what was Quinto though?

I wondered what the translation is on my Greek vid… 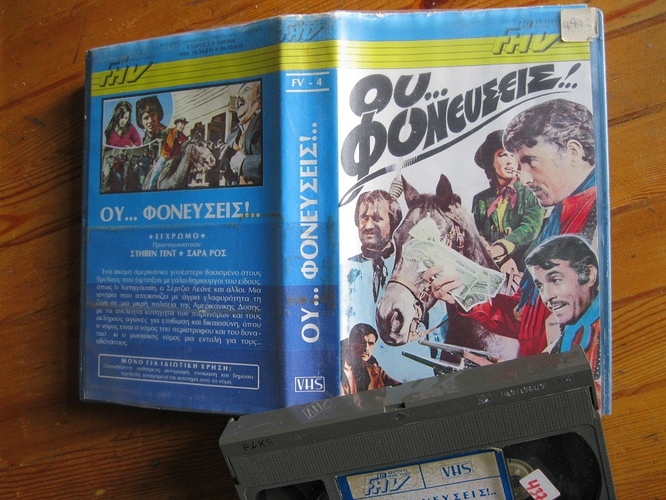 … finally I was provoked to find out via googletranslate…
THOU SHALT NOT KILL!
Cheers Brother JC, I wondered what Quinto was as well - 'til now

Good film as I remember.

The double cross element is really strong in this one as a gang of outlaws hang out in an Inn and decide who has stolen the cash from a recent haul.
Steven Tedd could not be different enough than my favourite western role of his in " Death Played The Flute ". Offbeat western and Sarah Ross is very good as the scheming female member of the gang.

hehe, this must be worst english translation of a movie title.

Film is quite promising but would have needed better cast to keep me interested. There isn’t much action in the film after the cool beginning where the bandits rob the bank dressed as a hooded lepers. Then it’s more about men talking and stalking each other while girls keep seducing them. There’s twist after twist in the plot and in the end I’m not quite sure what was the real motivation for some people’s actions.

Steven Tedd plays his role as if he were in the silent movie always clutching his hands and moving strangely.

Tedd is a bit of a “wimp” style character most if not all the time as I remember.

Would like a VHS with English audio if anyone has one to sell.

I’m not fond of Klimovsky 's westerns at all, but this one is pretty good. It got my attention from the beginning with those leper bankrobbers, great idea. Just whish the cast were a little better.

If you haven’t seen this before and you watch the WE disc, you might be a little confused. It appears they have used more than one source and unfortunately they have mixed up a couple of sections so the film is out of sequence.

Uh oh! So my Greek VHS might be superior?!

For now. I haven’t received a reply yet on my inquiry.

Just watched this SW and decided to make a comment as there has been no activity on this topic for a while. The movie is an average SW - probably could have been better but I found some of the english lines to be poor.

Yep replacement discs was sent to those (like me) that got the faulty one. What was wrong was according to Wild East: “…our original disc had two reels in the wrong order for Thou Shalt Not Kill”

This was our mystery movie, in case you were following our detective case

But it probably was never released theatrically, only planned to release.

According to Bruckner the first German version was on TV in 1985.

Also the first time for me seeng this title.
Bruckner copied the data from “Lexikon des internationalen Films” that shows TV (RTL) 13.8.1985 as first release date.
But that is not correct because the movie was released as BLUTIGE DOLLARS before on video from two German labels (Comet Video and Inter-pathe Video). They do not have the FSK sticker or any advice and so they have been released before 1985. I guess first German relase on video was between 1981 and 1984. It was not released theatrically before in Germany…maybe in Austria.