Gave this one a viewing yesterday and overall it was a satisfying spaghetti for me. Quintana manages to keep me involved in the story, with a nice pacing and some good action sequences. There’s a fair share of Spaghetti-styled camerawork, which is always a big plus for me, and for the most part the film plays it pretty straight. There are a couple silly parts, such as Ignazio Spalla’s Padre character praying to Jesus and actually receiving a spoken answer.

There’s some questionable moments also, requiring you to not think about them, such as one where Quintana is riding away from a group of soldiers. He dips to the side of a house along the riding path, and the soldiers just keep on riding, not even glancing at the house… while watching I couldn’t help but think “Are you kidding me?!”… This kind of thing works on a car chase through a downtown city, but not a horse chase through an empty countryside.
Although I’m not knowledgeable in the world of Zorro, I can definitely see the comparison.

Musical score is pretty good also, and the film even features the famed “wolf loop” throughout the course of the film.

A satisfying entry, given its a more obscure title without much of a reputation.

I particularly liked the camera in this one. Quite good for a SW of that class.
Musolino manages to use the usual roman setting quite well. Although I don’t like the mexican elios village that much, it looks pretty good in Quintana.

It was one of thirst I bought on DVD, shortly after rediscovering the genre for me.

I also thought the camerawork was very good… all around, the film was handled very well, I thought.

Quite a long time since I’ve seen Quintana. Should be on my rewatch list…

Still impossible to create new pages in the data base, so for the time being, you can read the review of this movie on my User Page, at the bottom, under: My Latest Review:

A really ingenious and witty review.

From time to time you came across a SW that seems to be part of the good old low budget in line production side of things, but for some reason it sticks with you, and in this case even end up liking it, Quintana its one of those cases and I’ll start for one of the main reasons

SOUNDTRACK
Just plain great, I liked so much that the all film could work without dialogue, just image and music, the director knew what he had in hands, so music comes as a constant across the all film, the guitar sounds are sometimes brilliant, but the all score is great.

STORY/PLOT
Weak , but out of the ordinary, for once our hero is not some skeptic cynic cowboy looking for the dollars but some guy with a family to take care, and no villain kills them, not even his girlfriend, we don’t also have the usual brutal near death beating and the common last resource recovery, combine with the obvious revenge. We have some love romantic plots, and a hero decided to take care of their own people. I must confess I never was a great fan of Zorro or Coyote films or from the character himself, a masked Mexican Robin Wood type of figure, descending of the Spanish blue blood upper class, that ends up defending the poor and oppress, works well in medieval England, but not in Wild Mexico, so I wasn’t expecting much, but I liked this poncho variation, a more natural thing to me, with colts and no fencing swords.
Of course the story is a bit basic with a lot of horses running around, but the music overshadows all that, and the woman in the film also had something to say.

ACTING
Apart from Femi and Ignazio Spalla really didn’t knew anyone, this Tony Di Mitri doesn’t look much like a hero, but it doesn’t spoil the film, and the main bad guy looked like a good actor. You couldn’t expect much from a film that got an actor famous for several credits in “Pornochachadas” (Brazilian actor Celso Faria), you really know you’re in the low budget side of things when that happens, but still the acting wasn’t bad. As for Femi let’s just put this way, if I had to choose between her and Rosalba I would go for (the two really) Femi any time.

DIRECTOR
Sadly the man had a short life, I already liked other SW with his production credits (Cjamango) and also liked this one, the framing with the 45º angle views were a nice touch, and the all film looked very realistic with the sets and costumes looking great, I must say I almost didn’t notice the usual settings for Italian soil made westerns, good job on that aspect. The action scenes apart from the night duel weren’t that great, with everyone hitting the dust like if they were figures from some old video game, in any case the photography work was good and original in some cases. The film looked also different from the SW majority, not that isn’t much classic western influenced, but doest had that cheap felling from some similar productions, and at begging I could sense some neorealist esthetic, with the old folks and the rural look appearing in the image, and that is always a good thing.

CONCLUSION
Not 4 stars material but I would go more than 3 a strong 3.5 for me, the soundtrack is a clear 5 that’s for sure. In the end I liked because the director was able to run away from the common stereotypes, not to create something new, but something different from the usual at this level of production.

[quote=“El Topo, post:7, topic:1589”]DIRECTOR
Sadly the man had a short life, I already liked his other SW directing credits (Cjamango) and also liked this one,[/quote]

He only produced Cjamango, but directed the 45° angle views sequel God May Forgive You, I Don’t. (It seems Vincenzo was less sure about dio than the pope)

He only produced Cjamango, but directed the 45° angle views sequel God May Forgive You, I Don’t. (It seems Vincenzo was less sure about dio than the pope)

The film looked also different from the SW majority, not that isn’t much classic western influenced, but doest had that cheap felling from some similar productions, and at begging I could sense some neorealist esthetic, with the old folks and the rural look appearing in the image

Vincenzo Musolino was a young talented actor coming from Calabria region, deep and (at the time but still now) depressed and underdevelopped south of Italy. Before being casted as main actor in a very successful neorealistic movie he was a fisherman in his poor village by the sea.
He was a beautiful looking young actor and he appeared in a certain number of neorealistic movies before becoming a producer and director.
Unfortunately he died very young, when he wasn’t still in his 40s.
Somebody noticed how Quintana but also “Chedi perdono a Dio non a me” has a different appeal compared to many other SW products. Some of you also noticed correctly a neorealist esthetic, with the old folks and the rural look appearing in the image.
Nocturno’s boss Davide Pulici noted (and in my opinion he’s completely right) that Musolino tried to import the poverty of his region and the poor social condition of his village and his hard, struggling adolescence as a poor southern fisherman in all of his works and, yes, you can see this sort of melodramatic situations, with women and men gathering around the table complaining and desperate like in traditional southern families for example (in Quintana). Also the general “moral” behind the story narrated in the cemetery by Giorgio Ardisson in “Chiedi perdono a Dio, non a me”, a story of revenge, has much to do with the traditional idea of blood revenge in southern Italy: wounded honour, the need of revenge to wash away this crime and the discovering of how useless is the quest for revenge in itself…probably Musolino’s movies are a rare example of mixing b-movie products/action products with a “higher” form of neorealism. Maybe the final result isn’t perfect but I wonder what Musolino could do in his further movies if he didnt die so young…

The first thing I noticed re this one is the music. Outstanding job of just evoking that Spaghetti atmosphere, and substains it through out the film. Are hero wears a Clint style poncho, and does what is expected. Good pace to the film, which fits the running time. Liked the camera work in the film, especially during the action scenes which were more on the stylish side of things for me. Yes surprised me this one, did not expect to be as good. Pleasant surprise.

I’ve had this one for awhile on my watch pile, and decided to give it look. Well, I’m glad I did, it turned out to be better than I expected. As it is stated from the above posts, the story is engaging with a nice pace to it with some good action scenes and I also liked the music score. All n all a pleasant one for me. 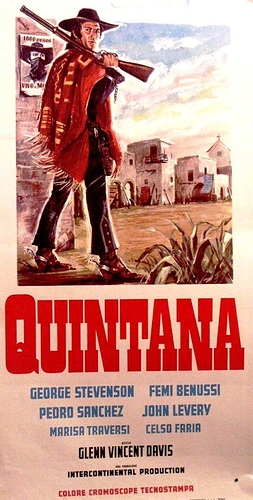 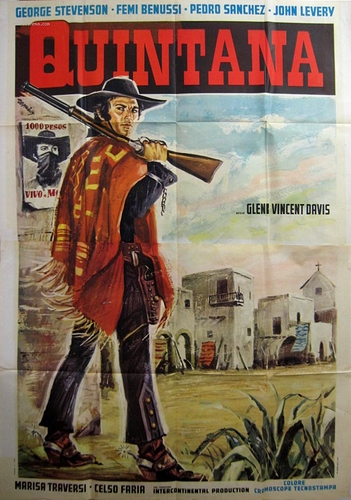 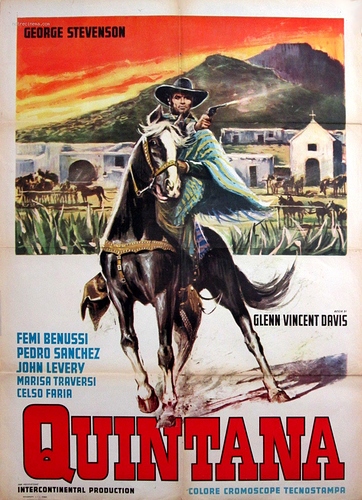 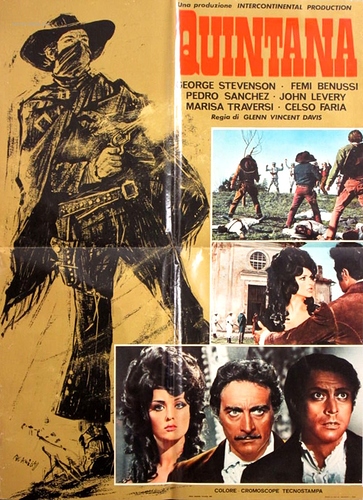 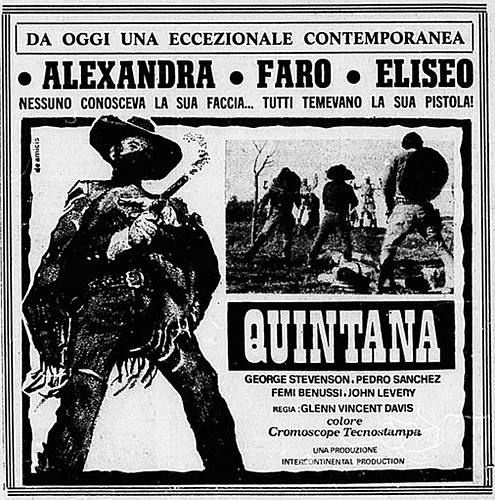 The first thing I noticed re this one is the music. Outstanding job of just evoking that Spaghetti atmosphere, and substains it through out the film. Are hero wears a Clint style poncho, and does what is expected. Good pace to the film, which fits the running time. Liked the camera work in the film, especially during the action scenes which were more on the stylish side of things for me. Yes surprised me this one, did not expect to be as good. Pleasant surprise.

I just watched it on Youtube with its very good image quality. The music is the strength here. For example near the end it reminded me strongly of the music in A Hole In The Forehead, but the composers are not the same.
This SW is entertaining even if it goes a little too easy for Quintana to shoot some dozens of soldiers (and is he protecting himself from covid-19 or rather some historic virus when everybody should know his identity ?).
Some well known Italian locations such as the Cinecitta mexican town and Villa Mussolini.
Maybe Quintana: Dead or Alive deserves a 6/10 rating at the most.