The Poll refers to your favourite movie independently from Ghidra’s performance, but in this Topic you can think about the path of the Serbian actor within the genre comparing films and interpretations.

The best is very easy for me to name: The Last Killer

A very underrated SW in my opinion.

Still a couple to view, but the best one by far at the moment is May God Forgive You… But I Won’t. Some standout scenes in the film.

I voted for Hole in the Forehead but Django the Last Killer is maybe equally good. I also liked Pistoleros, I need to rewatch it some day.

I voted for Hole in the Forehead but Django the Last Killer is maybe equally good. I also liked Pistoleros, I need to rewatch it some day.

I voted for Django the Last Killer but Hole in the Forehead is maybe equally good. I also liked Pistoleros, I need to rewatch it some day.

Last Killer rose above Forehead in my recent Top 20 - and I loved his mentor part, he really gets his teeth into this role. I like him a lot in all of these really, with Tequila Joe being my least favourite… for reasons I’ve already discussed on its thread. But Ghidra is a superb fellah for the genre - great face! 8)

Come on not, The Last Killer is very much first class stuff. All the others are less good. Hole in the Forehead is also far from disappointing.

A Hole in the Forehead and The Last Killer are okay movies, but Pistoleros is my favorite

I rate Last Killer 8/10. Excellent film. Not sure what my rating would be for others now, it’s been too long I’ve seen them but mostly 6-7/10 stuff.

I’ve never seen the film in German. A bad dub might harm a movie, yes. I watched German television a lot when I was a kid, so I’m used to German dubs of western movies, but they usually sound a little flat, with too often the same (type of) voices used. French dubs are often better in this aspect, offering a wider range of voices

It’s a toss-up between "Pistoleros and The Last Killer" for me, but i tend to lean more for “Pistoleros”. Going with that one.

The Last Killer had potential, but winds up being a very mediocre affair. Surprisingly, Stanton is apologetic here, instead of harsh. I’d expected him to rate it 2/10 (mine is 5/10, but our rating systems are different)

No surprise here.
The film is intelligent and very well directed, and also well acted, exactly my type of Spags.
I’m only harsh towards boring films, and this one is very entertaining. 8/10 at least.

I like the often similar Day of Anger after a recent re-watch more than I once did, but The Last Killer is still better in every respect. Also for the acting, Ghidra and (surprise!) Eastman beat LvC and Gemma easily

Meh, if it weren’t for Rod Cameron, Ghidra would be the John Wayne of spaghetti westerns; a stoic, average, actor who is somewhat effective.

Giusti calls Ghidra ‘di legno’, that is ‘wooden’ and asks himself what makes him effective. He thinks it’s his face.
I’m not sure. He’s one of those actors you immediately notice when they’re on-screen. Screen presence? Don’t know really what that’s suppose to be, but he seems to have it.

Meh, if it weren’t for Rod Cameron, Ghidra would be the John Wayne of spaghetti westerns; a stoic, average, actor who is somewhat effective.

As far as The Ultimate Killer is concerned: A film that is predictable, full of cliches, that has hardly any kinetic energy. Vari’s directing is nothing to write home about. I

You must have watched another film than I, which is all that not.

And for me Ghidra is far from wooden, he is a fantastic actor with a great screen presence. LvC has also screen presence, but he’s not much of an actor, and for that he is excellent by Leone and a bit wrong in Day of Anger.

Ghidra is ok in westerns, but not an actor that sticks in my head for long.

Strange, I love him, wish he had made a dozen more.

I often think I watch different films than you, when watching the same thing.

That’s not unusual, kinda normal. Closer to a fact than a feeling, but nothing one of us has to be troubled about.

So the Poll is lost every single time there are upgrades to the forum?

If so, give me back this! 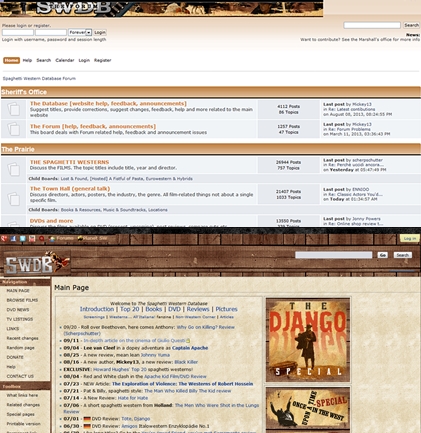 I have seen all these titles, but few of them stayed with me - The most memorable for me was ‘May God forgive you … I won’t’, because it has some classic Almeria locations and Ghidra has one of the best/worst Euro western names Dick Smart … how can you beat that ??? (for non native English speakers, smart can mean, to sting or hurt, so ‘Stinging Penis’ is rather a memorable name)

So the Poll is lost every single time there are upgrades to the forum?

not really. Above, there was a “typo” in there, no spacing between poll start tag and last letter of your sentence… that should work now…