Some of you apparently didn’t find Sergio Corbucci’s The Mercenary as “entertaining” as you perhaps were led to believe?

Franco Nero plays a very arrogant character, that is true, but this is also a part of how the story evolves, where Kowalski and Paco first parts company and then meets up again for the final settling of accounts.

Anyway to me this is one of the best SWs with an interesting fast moving script, decent budget, a fine cast (even if you could have replaced Musante with Milian), stylish direction by Corbucci and a top notch score by Morricone!

This sub-genre of political spaghettis is maybe the most interesting variation of the SW formula that emerged, and had it’s roots in the political turbulence of the 60s and 70s.

How many of these were made and what do we think of them? The erlier ones were pretty serious but as time went by the emphasis shifted to comedy.

These are the ones I can think of right now:

Quien Sabe, Big Gundown, Face To Face, Run Man Run, Mercenary, Companeros, What am I doing in the Middle of a Revolution, Viva La Muerte…Tua!, Duck You Sucker, Tepepa.

I have probably forgotten one or two, and I didn’t include Eurowestern Viva Maria

The Price of Power (Il prezzo del Pottere 1969).
Another political spaghetti western - not set in the Mexican revolution like many others, but a re-working of sorts of the Kennedy assassination. Great film from Tonino Valerri, with Giuliano Gemma doing what he does best.

Hmm, I think there’s a thin line between political films and morality plays or social commentaries. Simplistic left - or right wing philosophies can make for great westerns, with Italian westerns mostly choosing the left side of the political spectrum. Political tones can also be found in The great silence, Keoma, Run Man Run and Django, but also for example in the (German) Winnetou movies, in which racial equality is promoted. Of course there are the obvious revolution movies. This week I rewatched A fistful of dynamite in which left wing views were expressed quite explicitly. It leaves little to the imagination and even starts with communist quotes. Django Kill on the other hand takes it to a whole different level by becoming some hallucinogenic form of allegory. I think some examples leave little room for discussion whether they are political or not. Others, I feel, have merely chosen the morality play approach because it makes up for easy story telling, in which good and bad are sharply defined. An exampe of playing with it is Black Killer, in which a lawyer (Kinski) literally uses his law books as weapons. In the movie there’s lawlessness in the town. When Kinski show up there literally is law, and therefore he’s more or less ‘the king’. This of course is very simplistic but provides much entertainment. That there are grey areas when it comes to good and bad proves for example A bullet for the general. The original title is great in that respect. Personally I think movies should be foremost about supplying the popcorn muncher with entertainment. If the director manages to interweave some political message in it lurking in the background, the film usually appears to be more of a quality movie than you average braindead actioner or drama film. I think this is not necessarily so. I reckon it would be really easy to use wild west - or revolution themes as metaphors for, for example, the holocaust of the Jews in WWII or the Vietnam war. The assassination of JFK has been tackled in The price of power, as Reverend Danite points out in the above post. (I have not seen it yet). On another note I read on IMDB that Leone ‘dumbed down’ Bernardo Bertolucci’s too intelligent screenplay for Once upon a time in the west. The outcome is a masterpiece, but I’m sort of curious what would’ve been the outcome if more of Bertolucci’s stuff wound up in the movie. Anyway, I like A fistful of dynamite, but I thought Tepepa for instance was boring. Tepepa for me is an example of too much politics and too little action. If the balance is right however, the result can be great. But it doesn’t necessarily need political tones to be a good or entertaining movie.

Hmm, I think there’s a thin line between political films and morality plays or social commentaries.

Just love those thin lines … which equate to big fat shades of grey regarding this genre.
One I havn’t seen (but think I do have a copy of … hopefully ???) that falls over the political side of the line -
Killer Kid (1967). Weisser has it down as ‘A government agent … takes on an espionage mission into war and revolution-torn Mexico. … freedom fighters … Mexican peasants … k.k. begins to doubt his own political convictions … revolutionary … sacrificing her life for her ideals … joins the rebels in their attack against the dictator.’ And it’s got SD’s favourite - Anthony Steffen (’… one of his finest movies …’ according to Weisser.)
So there we go - gonna dig it out and give it a go … anybody seen it?

Peckinpah once said the western was ‘a universal frame in which we can comment on today’; his best films (as well as films like LITTLE BIG MAN, SOLDIER BLUE, ULZANA’S RAID) were equating the situations they described to the Vietnam War and the troubled situation in (then) contemporary American society (violence, lawlesness, racial tensions etc.). Of course this wasn’t their sole purpose - I think Peckinpah’s main intention was to make a good western - but it definitely IS an aspect of the movies and must be taken into account. Corbucci, Sollima and some others were left-wing, marxist intellectuals; revolutionary ideas were in the air and they fueled their movies with them. The political content of THE MERCENARY and COMPAñEROS is very obvious; the political content of THE SPECIALISTS (a bleak comment on the failure of student uprising of ‘68) is often overlookend, as I have stated a few times here on the forum.
I have done a post-graduate year in Paris, in the 80s, and found out that in those days there still was a lot of nostalgia among parisian students - and that Corbucci’s movies (and the soundtracks) were popular among them: I must have shouted (I’m not a good singer) VAMOS A MATAR, COMPAñEROS at least a hundred times.
Corbucci wasn’t dogmatic, thank God, Allah and Marx, so we can enjoy his movies. The same goes for Sollima: his films ARE political, but even if you don’t notice it, they’re enjoyable.
Seems like Bad Lieutenant and I more or less agree on this point. Anybody (apart from SARTANA DJANGO of course) with completely different ideas?
Two remarks, though: I like TEPEPA and I don’t think GIU’ LA TESTA/Duck you sucker was left-wing; I’m not completely sure about this, but I think Leone was mocking his colleagues’ simplistic left-wing ideas.

2 more maybe …
I found Killer Kid (and a coupla others on the shelf) and had a quick look to see what the quality’s like. A good looking print, full-screen tho and there’s people talking off-screen at times that should probably be on screen. Absolutely no idea what the subs are as well. Look eastern or Hebrew (Scherpschutter’ll know)

Somebody’s released a good widescreen print of this I’m sure? I’ll have to check this out … anybody know? (Franco Cleef maybe?)
Anyway - the 2 more … Revenge of Trinity/La Collera del Vento/Trinity Sees Red/The Wind’s Anger/The Wind’s Fierce to name but one …
and Deaf Smith and Johnny Ears? ???

Me too - watched it the other night. John Steiner’s great in this. Orson Welles don’t think too much of it tho’, methinks?

These are for ME possibly the absolute BEST Political SWs made and GREAT SW also.

A Bullet For the General 67 , was outstanding with a superb Lou Castel performance.

And notice that ANTHONY STEFFEN RIP is NOT in either of the above.

I think that many SWs that are labelled as political westerns are as much about morality as about politics, asking “what would you do / what side you would take in this situation” but not necessarily giving answers - approach that’s already a bit different from most simplistic good guys vs bad guys scenarios.

I understand why directors like Sollima have shrugged at the term political western, as it can give the banal impression of simply pushing some ideology or party in a cowboy story, and it’s usually more complex than that. For example I find many of the Mexican revolution adventures politically sceptical, they have their back then fashionable guerrilla sympathies but often focus on situations where the revolution can fail or be compromised (with greedy partners like Franco Nero’s Kowalski character in The Mercenary, for example) and this can be demonstrated very practically.

What I also like is that choosing sides often happens instinctively and almost irrationally through action (as in the end of Quien Sabé and Companeros), closest thing to a rational explanation maybe being Volonté’s Face to Face opening speech about wars and other chaotic times when everyone can find the answers only inside himself or herself. Those were the days of existentialism…

I noticed the use of Capitals and Bold letters also.

I myself like very much the smileys, capitals, bold and other features that posters are
allowed to use on this forum.

something that the poster feels is important and needs to be noticed.

I can think of other things on the forum that might be seen as “creepy” ;D like
that what are you eating thread…

I tnik that almost all spaghetti Westerns are political tosome extent. But often, these political aspects are misplaced in a filmthat is obviously focused on something else like Boot Hill

I don’t care much about political messages in SWs. Some of them might be more political than others.

IMO politics are just a plot element that make it a little more interesting, but I guess no one finishes a SW saying:

Man, have you seen this Django dude? He’s a victim of his time. Politicians shoult take care of people like the Django dude!

In most of the cases the political message is so well hidden that it can hardly be found.

Another old thread popping up… I’m sure we’ve had lots of discussions about this topic on the board since in other threads, which makes this thread rather obsolete really, at least among the regular members here…

Nowadays it mostly adds flavor to these films, but it’s still interesting I think 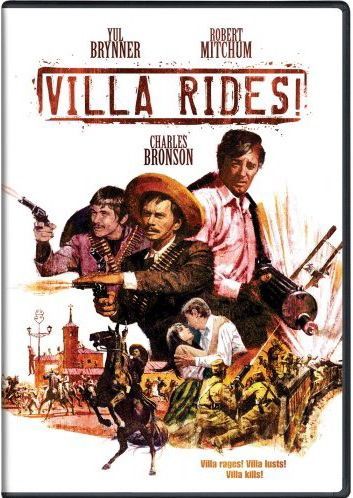 The story is abouth american gunslinger that sells machine guns for the “kolorados” a faction from federal mexican army that fight with Pancho Villa rebels.

but it’s not a spaghetti, isn’t it?

And technically not as good as it should have been either. Yul seemed all wrong and Mitchum was sleep-walking through his role, but Bronson is a highlight.

Revolutionary westerns are always somehow political. But first of all most of them deal with the people, with friendship, betrayal.

I think even there the political message is rather unimportant compared to those interpersonal aspects.

Duck you Sucker even starts with a political line, but eventually it’s all about John and Juan and John’s past .
ON the other hand the Mexican revolution is just another good setting for a lot of action. Maybe that’s why Leone included Mao’s line…