saw this last night and i’m with the rev i quite enjoyed this , although not as much as the wise reverend. i thought the first half was bordering on poor, but it got better. a great review rev, but i’d disagree on one thing which i’ll go into in a minute. I would agree that this is proberly the best Craig Hill starrer i have seen of his Sw’s, i’m not a great fan, but he is ok in this as are the other performances. a little uneven and veers all over the place in mood but that’s common in a lot of SW’s. i didn’t like the final scene at all, and it didn’t make a lot of sense, would have been better if they’d left it as it was up till then. seems like it was added for the " Happy Ending " crowd. anyway a easily watchable film. 6/10.

Pretty enjoyable low budget Spag. I’ve read the film forum topic specially the rev’s review, and became curious, but its a Sw that has the ability to raise above its own weaknesses.
The story is well constructed, if not original, it works more like a trhiller than a western only those final shot outs reminded me that it was a SW, the acting not bad also Ken Wood and the guy who played the Mexican character were both a surprise to me, good actors and I mean actors cause they really acted, Ida Galli wasn’t a bad actress, even Craig Hill was allright and I don’t like him much with all his stiffness (Steffen style of acting, only works for him , if it works at all).
The soundtrack was nice also with a great flamengo style guitar, and nice trumpet solos. Yes the films drags a bit in some scenes, but hey we are in the low bugdet side of Spaghettiland, so I can’t complain much, the Englsih/US dub wasn’t the usual trash, I’ve seen heard much worst. This director knows how to make a film tyhat’s for sure, even the happy ending ( or an anti Ennio ending ;D ) looked good in the picture.
Yes the bad guys were lousy shooters, but still one of the best low budget I’ve seen

i didn’t like the final scene at all, and it didn’t make a lot of sense (…) seems like it was added for the " Happy Ending " crowd

Happy ending? It seems that they don’t need the money any more…

Added a review of this one to the database
Not the greatest, not the worst movie of its kind, enjoyable, not gripping, and Garrone has done better, although he seemed to think that this was his best movie
Didn’t like that last scene at all. 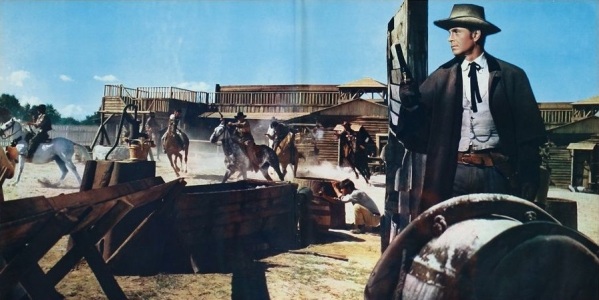 Good review, but why do you think that the last scene doesn’t make too much sense? Let’s talk about it! Sacrificing their lives they have saved an innocent man sent to the gallows, their chance to be redeemed. Take a look at those lyrics in your Pistoleros review…
Tre croci per non morire

What, in your view, is exactly the last scene? Is it some kind of hallucination? Or is it reality, with Paco and Jerry who came back from the other side (I watched it, purely by coincidence on the eve of Easter!) or having survived their wounds miraculously? Or all the y all three dead? Three crosses for them so that the fourth person will live?

I found the scene quite confusing, none of these three possibilities makes much sense to me, given the way the scene is presented

What, in your view, is exactly the last scene?

Critically wounded, Reno dies after exposing Mulligan and jail can be seen as some sort of purgatory to undergo additional purification. At the bank he can feel the men standing behind him, and the music stops emphasizing this: petrified he realizes that he was unknowingly dead and, no longer interested in money, joins his friends. Three crosses, but they’ve earned spiritual survival and will not be ‘‘lifeless forever, eternally’’. That’s how I read it.

It’s possible, it seems the most logical explanation, but I didn’t see too many indictions for such a reading in the rest of the movie apart from (maybe) the priest in the early scenes and the theme of redemption he proposes. But to redeem oneself, it’s (as far as I know) not necessary to die and the title says ‘non morire’ (but that may be the soul of course). Anyway, it looks like a fairly lighthearted movie to me, not an intellectual or over-dramatic one. Pistoleros is more ‘serious’ in that aspect, tackles the idea of guilt, collateral damage, redemption etc. in a more mature way.

But okay, I’ll rewatch the final 10-15 minutes tomorrow, maybe I missed a clue (or two) and will read the final scene differently

I consider this one a little confuse. I’m pretty sure that some cuts were made on the version I got,maybe that explains it or maybe it is just bad assembly process. The final scene could have been cool, but again there is no clearly understandable to me.

Anyone has a English audio copy of this film for me?

I’ve got one somewhere. I’ll try to find it

The ending is disappointing. It can be explained as Corbett has suggested. But there is no real preparation for that. No fainting by Reno that would suggest it is a fantasy. Wasn’t Jerry supposed to be dying in his last scene? As someone has also remarked no real ambiguity presented that would have made the film resemble DJANGO THE BASTARD.

It can be explained as Corbett has suggested. But there is no real preparation for that. No fainting by Reno that would suggest it is a fantasy

Sure, but the film gives no indication that he may have died from loss of blood nor at what point the post-mortem fantasy begins that would justify the ending.

I think I have seen, or stopped seeing after a short time watching, over 10 worse SWs than this one, but I have a mixed first impression of No Graves on Boot Hill. During a long fist fight I nearly turned the bluray-player off for good.

The main story is simple and acceptable, but the execution of it I found mezzy at least when our 3 antiheroes meet many more bad guys in a very irritating fist fight and then in some shootouts. The little lightheartness in the beginning and the end was rather silly (but justifies the film title in the second case)
Evelyn Stewart (born Ida Galli) looked really beautiful in long black hair, but neither the antiheroes, including Craig hill, nor the villains were especially charismatic.

The possible clever details of the plot, which I missed first time, in this who-dunnit-SW might rescue my rating if I understand/hear more a second watching and get more impressed.

I guess I will never rate this more than as one of my weakest 6/10 SWs in my collection, if not 5 or even 4/10. I tend to be more positive the second time watching, but it feels open here.

OK after my second watching No Graves On Boot Hill felt entertaining enough to be rewatched some time(s) in the future since I give it a (weak) 6/10, good for rank 79 on my SW Top 81. (But these low rated/ranked SWs will not be rewatched as often as higher rated, naturally…)