See, now the media are starting to see the revival too. They must’ve picked up on it by reading this thread. The SWDB everybody: Leading where fashion follows

Incidentally, The Hateful Eight and The Revenant are both now available for those who enjoy a spot of hot torrent action, baby! Got to love screener season!

Got to love screener season!

Real cineasts don’t do that

If I only watched Spaghetti Westerns in theatres, I’d never have seen a single one. But I’ve wound up buying plenty which I initially saw purely thanks to sites like Cinemageddon, Kick-Ass Torrents or The Pirate Bay.

I’ll be gong to see The Hateful Eight at my local Empire too but, along with the new Star Wars picture, they’ll likely be the only times I go to the cinema in the next six months; they’re certainly the only times I will have been in the preceding six. In fact the last time I went to the cinema was an outdoor screening of Django Unchained, about 14 months ago. I wish I could afford to buy six trips to the cinema to see one movie but I can’t. And I’ll always ultimately buy the films I want. Can I justify £15 on a newly released blu-ray? Yes, if I like it enough, although it’s nicer to get that same disc for £10, or £8. Because for that money I get a movie I’ll be able to watch forevermore, over and over (as cineasts are fond of doing). But can I justify spending £16 on two tickets (I’m not going to the cinema on my own) - or £22 if it’s a family movie and I’m taking my son too - plus petrol, plus the £10 or so on the obligatory coke-and-popcorn combo, just to see a movie once? No, I simply can’t. I guess if being poor means I can’t be a true cineast then I’m not a true cineast, but personally I don’t think that that should say all that much about whether or not I “truly” love movies; a sixteen-hundred+ DVD/Blu-ray collection suggests I possibly do, and it demonstrates that the movie industry gets my meagre disposable income eventually anyway.

People utilize torrents for many reasons, not just to buck the system or rob the industry. I won’t be robbing Quentin Tarantino when I watch The Hateful Eight later because I’ll be going to the cinema to see it too. And I won’t be robbing Alejandro Gonzalez Innaritu when I watch The Revenant tomorrow because I was never going to be able to go to the cinema to see that as well, so he was never going to get my ticket money. But if I like the picture (which in fairness, given the director, is almost a certainty) I’ll definitely be buying the blu-ray.

Giants of cinema from Roger Ebert to Martin Scorsese have tales of sneaking into cinemas just to try to see a movie back when they couldn’t afford to. Now I don’t know, but I reckon that’s because a true cineast will see a movie any way he or she can, one way or another.

The Revenant plot wise sounds a remake of the excellent 70’s film Man in the Wilderness.

Both are loose accounts of the same real-life story, that of trapper Hugh Glass who was left for dead by his party after being mauled by a bear.

Another article in that vein 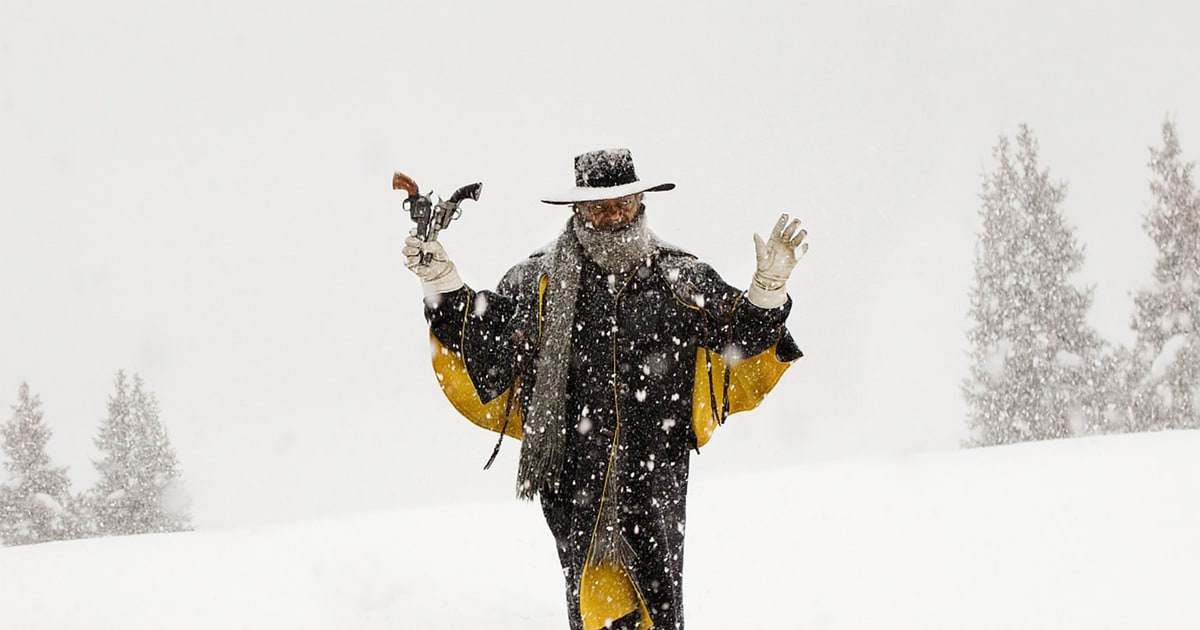 Why Westerns Are Tragically More Relevant Than Ever

Why 'The Hateful Eight' and 'The Revenant' prove that Westerns are more relevant now than ever.

Come on caress, stop making excuses for yourself, admit that you are a dirty pirate.

Just kidding. But I go to cinema as much as I can, that is, as much as my time schedule allows, which in 2015 was (only) 18 movies. I wish that number was at least once per week. No other movie experience can match the cinema. It is like going to see live concerts vs watching them on TV. Difference between cinema and TV is like difference between TV and smartphone screen. Until I build that big screen and cinema sound at home, I cannot replicate the experience, and therefore it is very much worth my money.

On the other hand, since I live in Croatia, which means that I am poor to most of you guys by definition, I have to cut the budget for artertainment somewhere, so I don’t buy many DVD/Blu-rays (there is not much place for them anyway with all the vinyl, CDs and (comic) books I collect - man I need a bigger flat

Dustbowl Americana slithers into the fantasies of idle dreamers; of the lonesome cowboy, trailing the plains in search of fame and fortune. Of the young girl, awaiting her father's return on a rotted, wooden porch; hoping for a solid shape amongst...

By the way I made this list on Letterboxd: http://boxd.it/yeuy

By the way I made this list on Letterboxd: http://boxd.it/yeuy

Great, new watchlist. I wouldn’t count The 3 Burials, but nevermind.
You do miss Bone Tomahawk on that list

And Gold, Appallosa, Seraphim Falls, The Proposition, The Missing…
And couple of Asian quasi-spaghettis. And Blueberry (although you do say “only the good ones”, so I guess we should keep that one out).

Gold?
Oh yes I forgot The Missing. Not sure about The Proposition, it’s not a Western, but then again neither is The Dark Valley… Blueberry. Hm

This Gold (it is German

wow, never heard of it.

Have you heard of “Free State of Jones” ?

Directed by Gary Ross. With Matthew McConaughey, Gugu Mbatha-Raw, Mahershala Ali, Keri Russell. A disillusioned Confederate army deserter returns to Mississippi and leads a militia of fellow deserters and women in an uprising against the corrupt...

Sweetwater (released as Sweet Vengeance in the UK, Australia and New Zealand) is a 2013 American western-thriller film directed by Logan Miller and co-written with Andrew McKenzie and Noah Miller. The film stars Ed Harris, January Jones, Jason Isaacs, Eduardo Noriega, Stephen Root and Jason Aldean. In the late 1800s, a beautiful ex-prostitute (January Jones) is trying to build an honest life with her husband Miguel in the rugged plains of New Mexico. When she catches the eye of a sadistic leade...

Is it any good? Originally didn’t wanna compile the most comprehensive list… but it seems I’m diverging from that path already

Yes it is, much much better than the idiotic 3:10 to Yuma remake for example.

Hey, we can make a poll for the 10 best westerns of the 21th century (so far)