The amount of travelling my wife and myself have been hours and hours in the car in search…I keep going through film after film wondering if i can get a glimpse of The named Esperanza station was used in other films with different name but nothing to date…I,ve not had time to look at the building you mentioned in top left of image you downloaded… My eyesight is not that good but will look at the film again

Nice to hear from you again in these days !
Your search by car travelling in theory could give you a better feeling of where there is the type of terrain we are looking for,especially those mysterious “smooth”, even, not rocky, background green hills maybe dominated by olive trees (as the close up view in the movie shows -the one you posted originally with the train + horse approaching the station). But the olive trees in that close up do not appear to be at such regular patterns as one can see in for example the subbetica area where hills are less dark green due to great space between trees.

The building I mentioned is only a possible small verification IF we find the actual location which of course would be easy to recognise anyhow from other details, so it will offer very little as a clue.

But my hopefully correct calculation in some previous post about the geographical positioning of the double railway tracks (due to the shadows direction) must in my view rule out tracks that go from southsoutheast to northnorthwest or with an even greater angle towards west. This should be another evidence which rules out Piñar and other possible stations in similar orientation. Statistically the tracks in Almeria,Murcia,Valencia usually tend to go to the west (more than the east) and therefore, all things equal, should be of less probability than for example tracks in Malaga, Cordoba, Sevilla, Jaen which I think should more often point more to east. Of course there are exceptions.

Regarding via verdes there are several also in south east in Murcia for example where you sometimes can travel via Google Street view. No new promising clues there though so far. Via verdes seem to be everywhere nearly in abundance,but so far I have no promising tracks. As you mentioned ESPERANZA might be along a regular double track and via verdes usually are single tracks.

So we should possibly be looking after double railway tracks (around 1966) that point more to the east than to the west if you consider the direction of the train in the movie as going forward more to the east.

I tried to look for such railway tracks with the help of https://www.vialibre-ffe.com/pdf/ViaDoble_España_21092010.pdf?fbclid=IwAR2U6iNMoQT75qg8kmrOYmPxZj6ydHbw1BHPVzyB3C7x98esoBGQwABvu2E see for example the map on PDF page 9 and maybe some other link regarding the state of conditions around 1966.

The important clue of the configuration of the telegraph poles should lead us to ESPERANZA, IF there in theory for example exist records of such details. As mentioned before the same configuration has appeared in photos from the Murcia province, but no promising tracks there so far.

Here I stumbled on a list of abandoned railways in Spain. Many of these are probably already investigated in some way or another, but most likely only a minority… 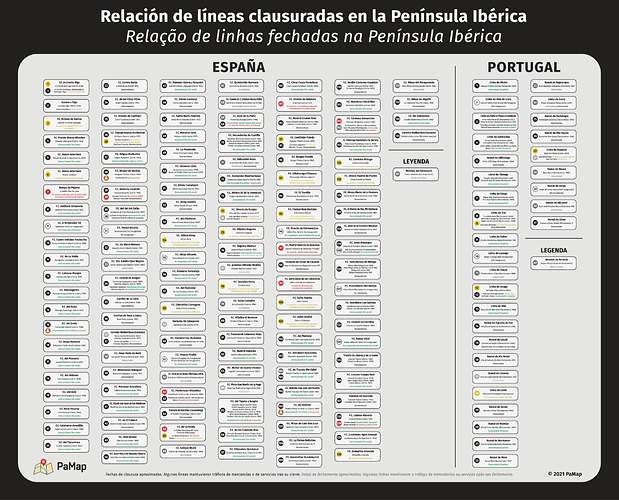 Yes if you are lucky that type of clue or evidence could appear.

There are at least two examples from SWs in the late 1960´s where they have used “matte” to fake either background mountains or a certain building/palace in the mountains. , Matte (filmmaking) - Wikipedia

Therefore I now more than before think there is a decent or rather high probability of the backdrop/background hills near ESPERANZA to be a fake image, if that movie still (posted above before) from Navajo Joe also was a fake.

In that case the configuration of the telegraph poles (4 vertical pairs) becomes even more important.
I have as stated before seen similar configuration on photos from the Murcia railway station and Gandia, Alicante and between Almendricos and Àguilas on video (and google street view surprisingly), but also elsewhere in Spain and even in Galicia. But they are rather rare on photos.

So in that case, the telegraph poles configuration, the double railway tracks which might be along a consistent double track and the “rocky edge” at the opposite site of the station become much more relevant than the background/backdrop.
But there is a parked railway wagon at Esperanza indicating a real station or apeadero so the double track requisite might not have to be applicable.

And this means that that the Murcia-Alicante area might still be a possible candidate not to be ruled out, regardless of background/backdrop. You should look for an appropriate track configuration and the “rocky edge” and maybe with tracks more likely coming from south/south-west to north/northeast direction to fit the pattern of shadows during the shooting of the movie that I have written about before.

I can say with 100% confidence , there is no matte painting or ‘foreground miniature’ work in ‘Navajo Joe’ … think about it? This process is either used to enhance a location which is impossible to build or to cover up something unwanted in the frame, which is a very expensive and time consumming process … plus, it’s easy to identify when you know what you’re looking for, … it can be easily spotted.

there is no matte painting

That’s a pity, since it could probably have been easier to find candidates for the location within a reasonable distance from Guadix.

Hello, I am following this thread with interest as a fan of railways and movie locations. My English is not very good. I have traced documentation on stations with two tracks, a ground floor building, a curved entrance, and a mountainous landscape in the background. There are not many coincidences considering the locations indicated in the film, but … I have found one that meets the conditions. I pass aerial image and updated capture so that you can give me your opinion 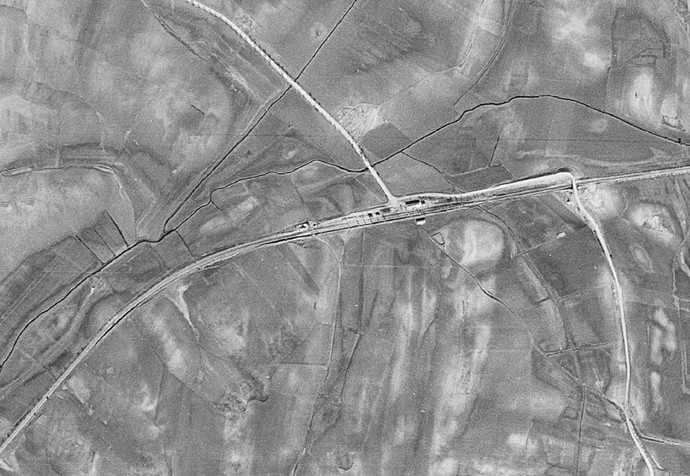 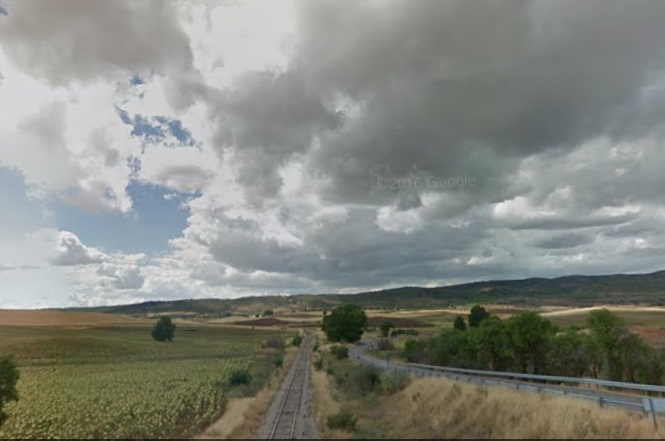 If it as normally oriented i.e.with north in upwards direction that is OK according to my theory about the shadows directions in the movie…

The single track on the lower photo might be a problem, but not necessarily, since the aerial photo from 1956 seems to show double track a sufficent distance.

Don’t you want to reveal where it is located ? I am curious !

The second photo looks interesting regarding the nature and topography, but one would want closer views and in more directions.

Thrilling IF you have found something HOT

Hi Picudo…I,m back at the ranch now lol… I started looking for ESPERANZA STATION many years ago and then asked for help via threads on Web sites… To date myself and my Amigos have not found the mystery where Burt Reynolds came into station Esperanza… I just want a conclusion to the mystery and not in it to take credit for solving …If you have found it then you will be credited …To date the image looking down needs further clarification,as does the single line photo…All i can say Picudo is reveal where it i is PORFAVOR…I live approx 20 minutes from Guadix station and will be prepared to travel if within 100 kilometer radius for you if you want… Let us know your intention please…Gracias Pedro

Looks like the mountain near PINAR Estacion Granada Province in the photo but we have ruled out this from previous visits.Pedro. Gracias

I think I have found something hot, but I have many doubts.
Each controls its subject, in the absence of primary sources, such as a renfe list in process.
I have focused on finding a station with two tracks, a building on the ground floor, a curve to the left, a building in front of the platform and a level crossing just before the station, in addition to a slightly mountainous background. With the 1956 air flight I have contrasted it.
Very complex task, but one that has allowed me to make virtual trips selecting lines from old private companies whose station architecture was cheap and very sober.
To this must be added the number of stations that no longer exist today and whose buildings have been demolished.
The north orientation criterion does not meet it, the west does.
I do not reveal the place since it is a first hypothesis, which I am trying to combine with the fact of why choose that place about 120 kms from Madrid, but not near Torremocha and Uceda.

Hi Picudo…I,m back at the ranch now lol… I started looking for ESPERANZA STATION many years ago and then asked for help via threads on Web sites… To date myself and my Amigos have not found the mystery where Burt Reynolds came into station Esperanza… I just want a conclusion to the mystery and not in it to take credit for solving …If you have found it then you will be credited …To date the image looking down needs further clarification,as does the single line photo…All i can say Picudo is reveal where it i is PORFAVOR…I live approx 20 minutes from Guadix station and will be prepared to travel if within 100 kilometer radius for you if you want… Let us know your intention please…Gracias Pedro

I have read the whole thread here and have seen the forums where you have asked. It is a task that I have also been carrying out for a long time and now I have taken up again because I have had access to historical information on the railroad in the province of Granada. I would love for Esperanza to be in Granada, but I have lost “Esperanza”. I have entered the forum when I have found a possible location, at the moment you are the authorities on this issue.

I am not sure the photo shows those “Piñar mountains”, but they could be those that are shown in the sequence before Navajo Joe reaches the station, andthat somewhat remind of the "Piñar mountains but not as “rocky”. Those are shown just seconds before in the movie when he drives the locomotive.

Please keep up the good work Amigo… We must continue the search as a team… We do know some scenes were filmed South of Madrid. Saludos
. What area in Spain do you live or dare i say it are you Italian… cheers

Congratulations Picudo I am very convinced now that you have found the ESPERANZA location ! Not Vellisca but another location…

After more than 3 years I am relieved, and @pedro_james has waited much longer…

Picudo please… What is the co ordinates to Esperanza. Gracias

pedro_james wanted this message to be posted here :