Hello, still thing about a english release of this film !

Just given this its second outing - and I’m pretty impressed.

It was all that talk about El Puro that’s had me trying to find the more mean, nasty, bitter films.
This isn’t as good or as mean as EP, but I knew something reminded me of it … and it’s an alcoholic character that links them.
In this case it’s Peter Martell, brilliantly hamming it up as a whisky-sloshing baddy, as he tries to forget that his brother is shagging his no-good ex. Unfortunately for the film its not the biggest role he’s played (thinking of recent discussions on Forgotten Pistolero).
But it is pretty gritty. A revenge for a murdered family, that has George Ardisson (Cjamango) going out to get the gang led by Anthony Ghidra (Dick Smart).
And there is some humour as well. There’s a far better Mexican sidekick fella (now I’m thinking of the recent Johnny Yuma discussion) - an opportunist that cons his way into getting the rewards for the dead bodies - at one point copping an eyeful of a pretty Mexican lass’s ample cleavage as he pretends to grieve for (his friend!) her lover.
And joy - Franco Pesce pops up briefly, yet again, as the (not so) mad old undertaker.
It moves along at a reasonable pace and looks and sounds pretty good.
Without giving too much away, I felt a little let down by the ending which either pays homage to, or rips-off, a bigger and better film. I would have liked it to have stayed a bit darker in feel.
You can tell it’s pretty low budget when they didn’t retake the scene - picture this …
Christina Iosani, the love interest, arrives to epic trumpet, as her horse and wagon part the cows, and the cow to the left is so thrilled it can’t control itself any longer and takes a shit right there and then.

The music deserves another mention, Felice di Stefano gets it together well. There’s moody harmonica, delicate Spanish guitar, and of course that rousing trilling trumpet.
Pretty damn good all in all.
My vote for MAY GOD FORGIVE YOU … BUT I WON’T is 13.87 out of 20

With all these international titles you easily take a film for another one, so is the avenger using a machine gun and shooting all riders of their horses, without hitting one single horse?
If so, I watched it quite some time ago and was not impressed.
But that’s about all I remember and I think I saw that film on a Luxemburgian commercial network, fullscreen and most probably cut heavily.

By the way, Reverend, did you get my answer to your PM ?

[quote=“scherpschutter, post:3, topic:713”]…so is the avenger using a machine gun and shooting all riders of their horses, without hitting one single horse?
If so, I watched it quite some time ago and was not impressed.
But that’s about all I remember and I think I saw that film on a Luxemburgian commercial network, fullscreen and most probably cut heavily.

By the way, Reverend, did you get my answer to your PM ?[/quote]
May contain spoilers … due to Scherp tho’ … me - I’m innocent!

Yes Scherp - that was the Django reference I was hinting at - but It’s more Terence Hill as Django with the machine gun than Franco. Franco Nero - shoots the rednecks. Terence Hill (in whatever it’s called) -shoots ‘em up but they’re riding on horseback and all the horses are missed. Madness. Same here. Still a good film tho’ (but I did say I was disappointed with the ending). (I’ll check P.M.)

What is the best DVD version available for this title? Thanks alot.

What is the best DVD version available for this title? Thanks alot.

I’m pretty certain that there isn’t a dvd release of this - only old vhs versions.
(Don’t get this mixed up with the [altogether better] film - 'God Forgives, I Don’t’
which is out on dvd. see database - www.spaghetti-western.net/index.php/Dio_perdona…_Io_no%21 )

This Spaghetti-Western by Vincenzo Musolino is an excessive hard (by 1968 standards) revenge movie. I think the flic is far from being original or intelligent but does entertain anyway. It impresses by its great cast and brutal shootouts. Anthony Ghidra is always a real pleasure to watch in a spag., this time as a bad guy, vicious Dick Smart. The rest of the cast is also worth mentioning: George Ardisson, Peter Martell, Cristina Iosani, Pedro Sanchez and Dino Strano.

What do you all think about this movie ???

I’d better link this to this, Brother Bluntwolf, 'cos there is another thread on this film. I watched this as well quite recently and enjoyed the nastyness of it, but not the silly ‘Terence Hill-as-Django-stylee-shoot em all off their horses witha big gun and not hit a single horse’ bit. Otherwise - pretty damn good.
My more fully expressed views are over here…
www.spaghetti-western.net/forum/index.php/topic,800.0.0.html

I watched this as well quite recently and enjoyed the nastyness of it, but not the silly ‘Terence Hill-as-Django-stylee-shoot em all off their horses witha big gun and not hit a single horse’ bit. Otherwise - pretty damn good.

Thanx, Reverend ! I didn’t notice there was another thread! I absolutely agree with you about the film !!!

CHIEDI PERDONO A DIO NON A ME 1968 Directed by : Vencenzo Musolino

Let us have an official DVD Release soon please… 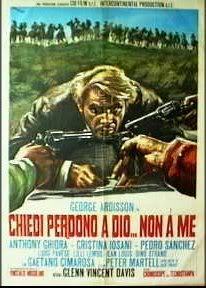 Now that this SW is no longer on the index it was on german TV.

Nasty and mean it was, but all done without too much ideas. Pretty standard and ok for fans.

Ardisson looks much too pained to be a convincing hero, Martell is good in a much too small part, and a bearded Ghidra looks different as usual, so different that I was waiting half of the film for his appearance, before realising that he was already there. Haha

And they are not only missing the horses, they must have gunned down Ghidra’s about 15 (or maybe 20) men about 10 times in the machine gun end.

Yes, sound to be very action on some parts, that I could watch, my version audio is italian and pretty good image. Still wanna some subs, hehe

Cjamango (George Ardisson) returns home from a trip to town to find his family murdered. While away, he had spoken to a woman he obviously had some history with and it’s apparent that there was bad blood between their families (her father holds the mortgage in his dad’s ranch and Cjamango pays this off before leaving town). Later he is approached by Barrica (Pedro Sanchez) who witnessed the murders and offers to help him track down the men involved. It transpires that he has ulterior motives, being content to let Cjamango do the work while he picks up the bountys. Cjamango finally learns that his ex’s dad hired the Smart brothers (Anthony Ghidra and Peter Martell) to carry out the killings and he goes all out for revenge.

Nice opening titles to this one, and a mostly Ok soundtrack. I’m not too familiar with George Ardisson except for Django Against Sartana and Massacre At Grand Canyon. He was OK, a bit stiff, very stoic, but with a bad, blonde dye job. I found myself wondering when Ghidra and Martell were going to show up and was just a little disappointed at Martell’s limited screen time as his brother seemed a hell of a lot more interesting than Ghidra’s. Overall. a standard theme, competently acted and played pretty seriously. Thankfully, not too much comedy, only that supplied by the greedy Barrica, and i actually did find the character amusing rather than annoying. High body count, mainly from the rather OTT ending though. Not bad, but probably could have been better.

I should have guessed it??

Shit, you are good Silver, I hoped someone would ask so that I …

Shit, I truely believe Behemoth burns his girls when impotence strikes him, going insanely malevolent
No?